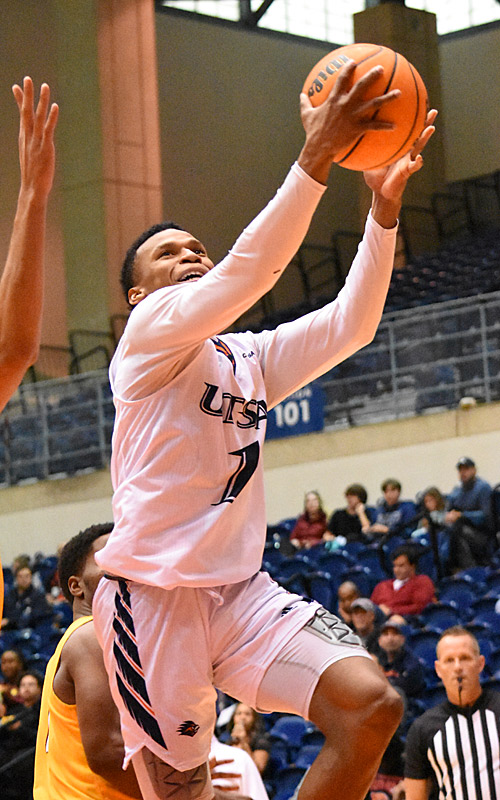 The UTSA Roadrunners had positive day on a number of fronts Sunday afternoon in rolling to a 90-69 victory over the Bethune-Cookman Wildcats.

For one thing, their offense seemed to have a good look about it, especially the three-point shooting. The Roadrunners hit 11 of 23 triples for 47.8 percent. 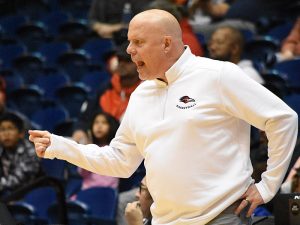 In addition, they also used some different player rotations and seemed to do well with whoever was on the floor at a given time.

Despite a slow start, they corrected the issue with a 35-17 run to the end of the first half that lasted a little more than 10 minutes — one of the best stretches of basketball that they’ve produced all year.

One notable question for the team leading into a Thursday night Conference USA opener against North Texas, however, centered on senior Jacob Germany, who twisted an ankle early in the second half and didn’t return.

“A little concerning,” Coach Steve Henson said. “Probably will get X-rays right away. He twisted it pretty bad. We’ll find out soon.”

On a move to the basket, UTSA’s leading scorer for the season went down in a tangle of players under the goal with about 13:30 remaining in the game. 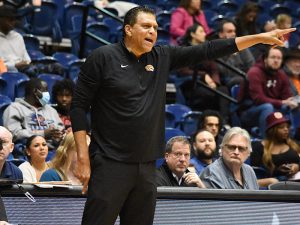 Coach Reggie Theus’ Bethune-Cookman Wildcats lost to both Incarnate Word and UTSA on a swing through San Antonio. Theus was a two-time NBA all star with the Chicago Bulls in the 1980s. – Photo by Joe Alexander

He came off the floor grimacing, as trainer Jiana Hook attended to him. Later, he was seated on the bench in a walking boot.

“Hope it’s nothing serious,” Henson said. “He twisted it badly. So he’s not going to be feeling very good when he wakes up tomorrow. He’s in great hands. Jiana will take care of him and the doctors will do a great job.

“Hopefully it’s just a sprain and we can get him some treatment and get him back as soon as possible.”

UTSA started slowly, with Bethune-Cookman of the Soutwhestern Athletic Conference pulling out to an early 21-14 lead.

From there, the Roadrunners produced a run toward the end of the half that was as good as any this season. 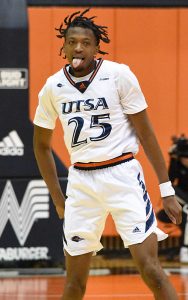 By the time it was over, UTSA was up 49-38, and Bethune-Cookman was reeling. Meanwhile, the Roadrunners (6-5 on the season) kept applying the pressure in the second half.

As a result, the Wildcats (4-7) never got closer than 10 and found themselves trailing by as many as 26 with two minutes left.

UTSA guard D.J. Richards admitted that it felt good to win in convincing fashion after losing by double digits to both New Mexico and Utah — two teams ranked in the top 40 in the nation — on a recent road trip.

“We played two (NCAA) tournament teams,” he said. “We felt like those were good measurements for us. We felt like we’d learn from them and just move forward.”

Richards said UTSA employed an up-tempo attack to turn the game around at the end of the first half. 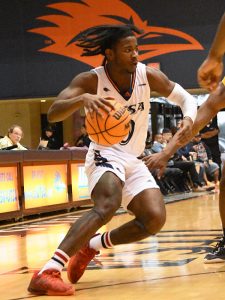 The Roadrunners’ three-point shooting has been effective over the last five games. Four times in that stretch, they’ve hit 10 or more from beyond the arc.

Against Bethune-Cookman, Addo-Ankrah came off the bench to lead the barrage with four from distance, while starters John Buggs III, Japhet Medor and D.J. Richards hit two apiece.

Joe French led the Wildcats with 27 points on 10 of 19 shooting.

North Texas at UTSA, Thursday, 7 p.m. (a Conference USA opener for the Roadrunners)

UTSA opened the game with freshman Massal Diouf at center and Germany at power forward, with Medor at point guard, Buggs at the shooting guard and Richards, another freshman, on the wing at small forward. 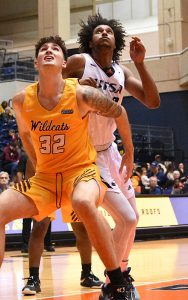 Richards continued to shine, scoring in double figures for the third straight game. He’s scored 20, 12 and 12 points, respectively, in his last three outings.

Nothing seems to faze Richards, who played last year at Montverde Academy in Florida following a high school career at Houston Cypress Creek.

In interviews, he thanked coaches and teammates for “believing in me,” but he also expressed optimism that Diouf also would continue to blossom.

“I’m just really happy for Massal,” Richards said. “He came a long way from having, like, no minutes to the starting lineup … I hope he just builds on it, small steps, and then who knows where he’ll be.”

It was the first start of the season for Diouf, who went on to play 18 minutes and 45 seconds. 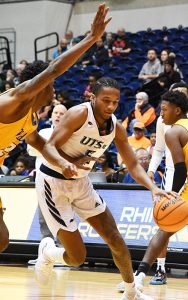 DJ Richards hit five of seven from the field, including two of three from long distance, in scoring 12 points for his third straight game in double figures.. – Photo by Joe Alexander

The 6-foot-9, 240-pound forward from The Netherlands had only three points and four rebounds, but his physical style seemed to give the Roadrunners a lift.

“Just feels like he gives us a little different look,” Henson said. “We thought it would give Jacob some more life, knowing that he wouldn’t have to be the one banging all the time.

“Overall, felt pretty good about it. Massal played quite a few minutes in the first half and didn’t turn the ball over, and that’s the big thing.

“The game’s just a little bit faster (than he’s seen previously). He doesn’t have much experience. If he can protect that basketball and then rebound big, he can play for us.”

With the victory, UTSA improved to 4-5 on the season against Division I competition, while Bethune-Cookman fell to 2-7. Daytona Beach, Fla.-based Bethune-Cookman moved up from D-II to D-I in 1980. The Wildcats have never been to the NCAA tournament. UTSA started its D-I programs, with men’s basketball as the lead sport, in 1981. UTSA has been to four NCAA tournaments.

Finding a spark midway through the first half, the Roadrunners hit 10 of their last 14 shots from the field, running away from the Wildcats to lead 49-38 at intermission … For the game, the Roadrunners connected on 25 of 28 free throws for a season-high 89.3 percent. The 25 makes were also a season high.

Isaiah Addo-Ankrah hits a first-half three for the UTSA Roadrunners, who cruised to a 90-69 victory Sunday over the Bethune-Cookman Wildcats. Please see our early game story. https://t.co/hyCDEtJChY pic.twitter.com/glx5v1l0Nl

Taking what the defense was giving, Japhet Medor drives for a layup at the halftime buzzer, lifting UTSA into a 49-38 lead on the Bethune-Cookman Wildcats. https://t.co/hyCDEtJ4sq pic.twitter.com/kYzgFv4QU8

Spotting up for three

John Buggs III hits a three on a fast break late in the first half against Bethune-Cookman. Moments later, the Roadrunners pushed the pace and added another trey by Japhet Medor. UTSA leads 38-28, under five minutes left. https://t.co/hyCDEtJ4sq pic.twitter.com/OsDPoGbvHu