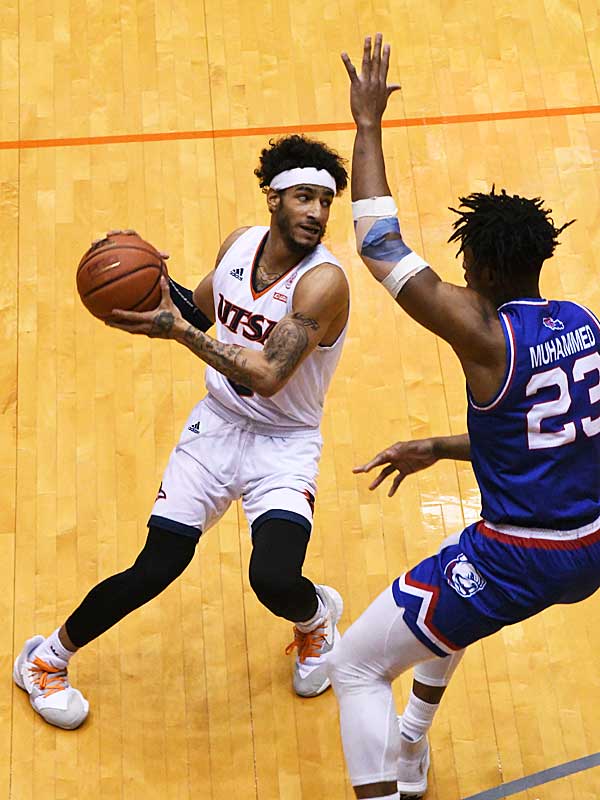 Facing the possibility of an 0-3 start in Conference USA, the UTSA Roadrunners showed equal parts fortitude and flair Thursday night, burying one of the C-USA’s better teams with a prolific, first-half shooting display.

Later, they hung on for a record-setting, 89-73 victory over the Louisiana Tech Bulldogs in front of an announced 922 at the Convocation Center. 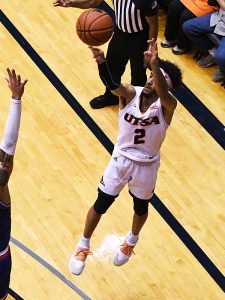 Jhivvan Jackson had 37 points, 6 assists and 5 rebounds to lead the Roadrunners. – photo by Joe Alexander

The difference, easily, was three-point shooting. UTSA made a school-record 18 and gave up only six. In a dizzying display, Roadrunners junior Jhivvan Jackson knocked down a career-high, tying eight by himself.

“It was a great win,” said Jackson, who scored 37 points. “Other than (making) the shots, we got the stops we needed in the first half. I mean, that was our main focus coming into the game. We got to get stops. The offense going to take care of itself.”

LA Tech showed up at the Convocation Center with the conference’s best rating (No. 59 nationally) in the NET standings.

UTSA, on the flip side, came in far down the list at No. 249 in the NCAA’s rating system of 353 Division I programs.

On a more personal level, UTSA players felt stung by starting conference play with two losses in Florida last week, including a game they virtually threw away at Florida International on Saturday night.

But in a nod to the craziness of college basketball, the Roadrunners built a commanding 26-point intermission lead on the Bulldogs, juiced it to 29 in the second half and then made enough plays down the stretch to keep the Bulldogs at arms length.

“We knew it would take a great effort (to win),” UTSA coach Steve Henson said. “You know, we made shots. So, that might have skewed things a lot. But, shoot, we’ll take it.”

UTSA — Jackson hit 11 of 23 from the floor, including 8 of 15 from three, and 7 of 8 free throws. He also had six assists and five rebounds. Forward Luka Barisic followed a 14-point outing at FIU with 16 against Louisiana Tech. The 6-foot-9 Croatian nailed 4 of 5 from three. Keaton Wallace played well defensively and also contributed 13 points and six rebounds. Byron Frohnen was major a factor with nine points and 10 rebounds.

Louisiana Tech's Isaiah Crawford gets a steal and a breakaway slam early in the second half. UTSA, 59-36. 17:11. https://t.co/hyCDEtJ4sq pic.twitter.com/R0TKgbhTO6

LA Tech — UTSA held one of the conference’s better three-point shooting teams to 6 of 17. Long-distance sharp-shooters DaQuan Bracey and Amorie Archibald were a combined 0 for 3. Bracey and Kalob Ledoux scored 12 points apiece. LA Tech also failed to disrupt the UTSA offense as much as it would have liked. UTSA had trouble at times with 14 turnovers, but the errors weren’t consequential in the end. Coming in, the LA Tech defense had forced an average of 17.1 opponent turnovers per game.

The Roadrunners shot 55 percent from the field and tied a season-high for points in a half, racing to a 53-27 lead on the Louisiana Tech Bulldogs at intermission.

Initially, Jackson couldn’t get an open look with LA Tech swarming him with double teams.

At the same time, the strategy opened up the floor, and the Roadrunners’ complementary players started hitting from everywhere.

Once the Bulldogs stopped doubling on UTSA’s leading scorer, Jackson went off in a flourish, finishing the half with 18 points.

Keaton Wallace with a tough two. UTSA might be playing it's best half of the season. Roadrunners up, 43-21, with 5:27 left until intermission. https://t.co/hyCDEtJ4sq pic.twitter.com/7wl4siHpv1

Center Jacob Germany, a 6-11 freshman from Oklahoma, continued to raise eyebrows with his play in the first half. On one occasion, he raced ahead of the defense and caught a long pass for a layup. On another, he snared a lob in front of the rim and — facing away from the bucket — threw it down two-handed as a no-look dunk.

San Antonio resident and former UTSA star Derrick Gervin attended the game. Wearing a cap with the school logo, he sat high in a section of bleachers behind the Roadrunners’ bench. Afterward, the 1980s-era power forward for the Roadrunners visited with reporters at press row.

.@UTSAMBB legend Derrick Gervin back at the Convo. If you look at the background closely you can see his jersey hanging in the rafters. https://t.co/6d5g3sbbCO pic.twitter.com/a4Pjde6uJe