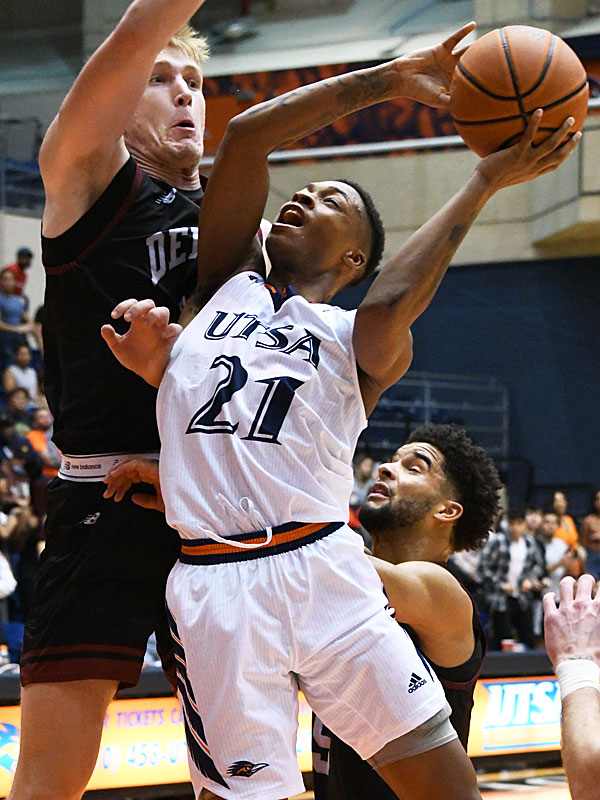 Jordan Ivy-Curry knocked down 10 of 19 shots from the field and hit five from 3-point range in UTSA’s 78-64 victory over the Denver Pioneers. – Photo by Joe Alexander

Well, how are you, coach? “Better than last night,” Steve Henson said Tuesday night with a wry smile.

Henson’s UTSA Roadrunners had just rebounded from a deflating loss to a Division II school. In doing so, they employed an offense with flow and a defense that relied some on zone looks to completely flummox the Denver Pioneers. 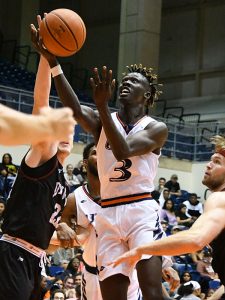 Dhieu Deing has reeled off four straight games in double figures to start his UTSA career. He scored 11 points and also had eight rebounds against the Pioneers. – Photo by Joe Alexander

With all that, they upended the Pioneers, 78-64, at the Convocation Center. UTSA’s first victory of the season over a Division I program served a number of useful purposes.

First, it snapped a two-game losing streak. Next, it allowed UTSA to wash the horrible taste of a Monday night loss to the Texas A&M-Commerce Lions out of its mouth.

Finally, it gave the Roadrunners a chance to go 2-1 in an early-season, three-games, in-three-days test.

Against the Pioneers, the Roadrunners finished strong, turning a close game into a double-digit win by forging a 15-6 streak in the closing six minutes.

“This one feels good for a lot of reasons,” Henson said.

First and foremost, the coach said, it just feels better to win. 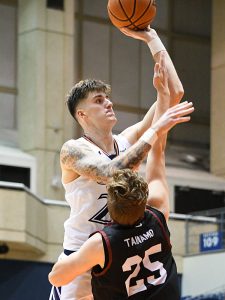 From last Friday through Monday, the Roadrunners had been pretty bad.

About as bad as they could be, actually. They had shot a near-school low 22.7 percent from the field in a 96-44 loss at the University of Oklahoma last Friday night.

Then on Monday, at home, in the first day of their own multi-team event, they were humbled again.

Just when it appeared they had found a rhythm against the Lions, forging a seven point lead early in the second half, they stumbled badly, losing the lead with sloppy play and then falling 65-62 on a buzzer-beating, three-point heave by Alphonso Willis.

As far as the Roadrunners were concerned, nothing could have felt worse.

“I couldn’t sleep,” admitted UTSA guard Jordan Ivy-Curry, who responded against the Pioneers with an effort befitting his nickname.

Harkening back to his days at La Marque High School, “Juice” hit 10 of 19 shots from the field. From long distance, he was 5 for 9.

He scored a career-high 27 points to go along with four rebounds and three steals in 34 minutes.

“Yeah,” Ivy-Curry told the team’s radio broadcast, “I had it going, but I want to give a big shout-out to my teammates, coming in with a positive mindset after a tough loss yesterday.”

What was the difference?

“We talked about it in shoot-around,” he said, “making smart plays, making better plays , taking open shots. We were focusing on that.”

Former UTSA coach Tim Carter told Ivy-Curry he seemed to be more loose and more aggressive, and he inquired what his coaches may have told him before the game.

Ivy-Curry had quite a bit of help.

Center Jacob Germany had 17 points and 8 rebounds. Forward Dhieu Deing had 11 points and 8 boards. Defensively, they were good as a team.

After the Pioneers started fast by hitting four of their first seven attempts on 3-pointers, the Roadrunners clamped down with perhaps their best effort of the season.

UTSA defensive highlights included sophomore forward Lachlan Bofinger chasing down a Denver guard and blocking a layup attempt from behind, off the backboard. On the other end, Deing completed a three-point play for a five-point swing.

Also, guard Erik Czumbel took a charge near the end of the game from Denver post Michael Henn. The foul sent Henn to the bench with five fouls.

Speaking with reporters afterward, Germany admitted that the loss lightened the mood in the locker room substantially.

“”Last night took a toll on everybody,” he said. “Something like that just crushes you. I think we bounced back(well). We had a good shootaround. It carried over to the game, and everyone was just happy afterward.”

Jordan Ivy-Curry hits a three out of the corner for UTSA. Ivy-Curry led the Roadrunners with 17 points in the first half. UTSA pushed out to a 42-35 intermission lead against the Denver Pioneers. https://t.co/hyCDEtJ4sq pic.twitter.com/xRnlOPz7bG