The Old Dominion Monarchs return to UTSA tonight with a chance to avenge an embarrassing 74-73 loss. On Jan. 26, the Roadrunners outscored the Monarchs 25-6 in the final 4:43 to win, prompting a wild celebration at the Convocation Center.

For fans who witnessed UTSA’s miraculous 74-73 victory over Old Dominion on Jan. 26, the memory likely will linger for some time.

The Roadrunners trailed by 18 points when a series of crazy plays ensued, allowing them to mount a comeback in the last 4:43 of the game.

It was one for the ages, the second biggest rally in the last five minutes in NCAA history.

At the time, the feeling among UTSA players was almost surreal, with many failing to fully comprehend what had just happened.

Now, they get a chance to prove that it wasn’t a fluke.

The Roadrunners can stay in the race for the Conference USA title with a win at home tonight against the Monarchs. 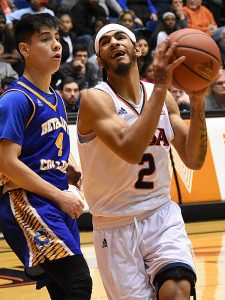 Old Dominion, on the other hand, can clinch the regular-season championship with a victory.

The Monarchs also are thinking about making amends.

“We got to prove last time wasn’t just a lucky win.”

So, a Monarchs victory tonight would give them a three-game gap in the loss column with two left, which would clinch for them the No. 1 seed in the C-USA tournament.

For UTSA to win the championship, it likely needs to win four in a row — against Old Dominion and UAB at home, and against Western Kentucky and Southern Miss on the road.

UTSA hasn’t played since Feb. 16. Players say they feel good physically entering their first taste of C-USA bonus play, but it remains to be seen if the time off will negatively affect their shooting. 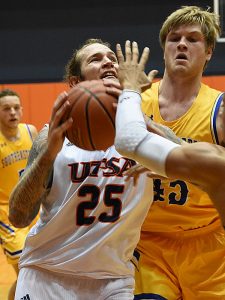 Senior forwardNick Allen has supplied leadership to a team that has won 10 straight at home. – Photo by Joe Alexander

At a Tuesday afternoon practice, the Roadrunners seemed to be hitting a good percentage. Even players who don’t shoot much in games were knocking them down.

“Guys have been getting extra shots after practice,” Wallace said. “It’s carried over (into formal workouts) and it’s goiong to carry over to the game.”

The Nevada Wolf Pack hold the record for the largest comeback in NCAA history with the clock inside five minutes, according to the game notes for tonight’s game at UTSA.

The Wolf Pack established the standard two seasons ago when they stunned New Mexico 105-104 in overtime.

Trailing by 25 early in the second half at Albuquerque, the Wolf Pack were still down 19 with 4:27 left when they started to catch fire.