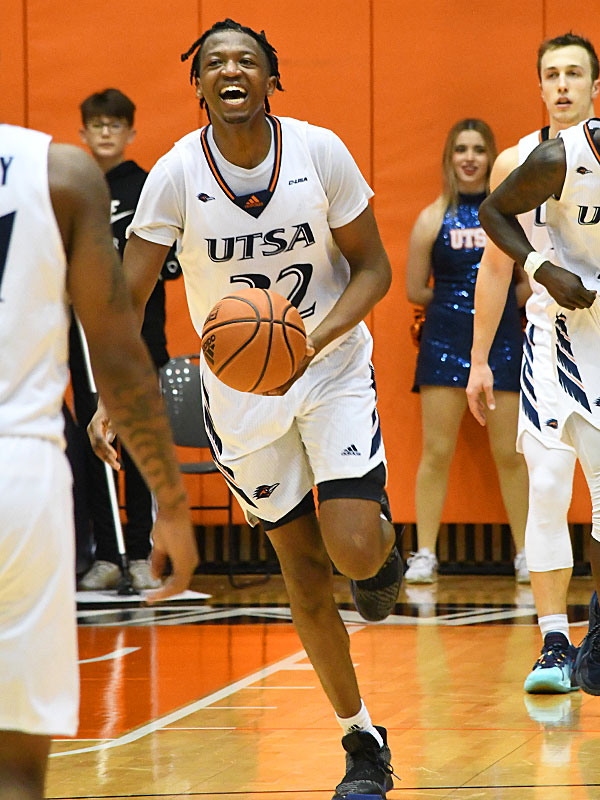 Isaiah Addo-Ankrah celebrates after grabbing the final rebound of the game as UTSA beat Florida International on Jan. 27. – File photo by Joe Alexander

Sharp-shooting guard Isaiah Addo-Ankrah has mixed emotions about how his sophomore year with the UTSA Roadrunners has unfolded.

On one hand, the losing hurts. His Roadrunners have dropped four in a row and have registered a 2-13 record since the middle of December.

Then again, Addo-Ankrah gets a measure of personal satisfaction from the way he has proven over the past three weeks that he can play at this level — as a walk-on, no less.

“It’s kind of weird,” Addo-Ankrah said Friday. “I’m happy because I’m playing now. (But) with the losing, I’m not as happy. You know, I’m scoring and helping the team, but we’re still losing.

The 6-foot-6 Houston native spelled out his feelings Friday on the eve of a Saturday afternoon home game against the powerful Western Kentucky Hilltoppers.

“I feel like we had a good week of practice,” Addo-Ankrah said. “I feel like the spirits are still up, which is a good thing. We still have the faith that we’re going to turn this around and start winning games.”

At the start of the season, UTSA players had high hopes for team success despite projections that had them pegged to finish below the middle of the pack in Conference USA.

By mid-December, the Roadrunners were 6-4 and were just starting to get some kinks ironed out with their offense when adversity struck.

A few players entered Covid-19 protocols and couldn’t make the trip to Illinois State. Since then, the problems have multiplied, seemingly on a weekly basis.

Everything from Covid protocols, to an academic casualty and to an incident in which one player just decided to leave the team for a few weeks — it’s all plagued a proud program that has posted winning records in three of the last four seasons.

In Addo-Ankrah’s case, he’s doing what he can to help right the ship.

Stepping into a role as a backup wing player in the wake of a season-ending injury to forward Aleu Aleu, the former standout at Houston Second Baptist High School has averaged nearly 10 points over his last three games.

For the season, Addo-Ankrah has played in 15 games, more than doubling the six he played last year as a freshman. Moreover, he’s also nailed 17 of 38 three-point shots for a team-leading 44.7 percent.

The first indication that Addo-Ankrah might be able to contribute more than just as a practice player came on Jan. 20 at UTEP when he knocked down three 3-pointers.

A few weeks later, on a trip to Houston to play at Rice, he broke out with his season-high of 15 points on five of six shooting from three. Perfect timing, considering his family and friends were in attendance.

“I was just happy to be out there,” he said.

The emergence of Addo-Ankrah is clearly one of the bright spots for UTSA coach Steve Henson in the past few months.

“It’s awesome to watch it happen right before our eyes,” Henson said. “He does everything right, every single day. Unbelievable teammate. Guys love him. Comes in here and just fights and competes.”

When Addo-Ankrah left high school in 2019, he attempted to walk on at the University of Houston, and after failing to make the squad, he elected to stay in school and help out as a practice player for the women’s team.

By the spring, he started looking around, sending out communications to see if UTSA coaches were interested. They were.

“You know, he’s been on the scout squad every day for two years now,” Henson said. “Never, ever flipped over to the main group. We threw him in a game. He made some shots, and he’s taken it and has run with it.”

Injured UTSA guard Jordan Ivy-Curry, the team’s leading scorer, will not play against the Hilltoppers. He rolled an ankle at the end of UTSA’s game at Middle Tennessee Statte on Monday night and hasn’t practiced at all in the wake of the mishap.