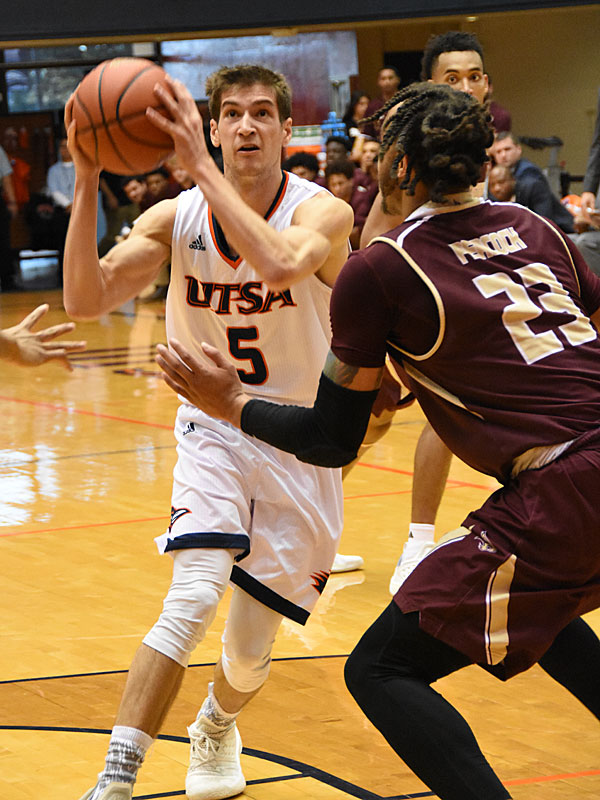 Giovanni De Nicolao drives to the bucket against Texas State.

UTSA junior Giovanni De Nicolao confirmed Friday that he is on pace to graduate in the spring and could elect to make the jump to professional basketball next season.

De Nicolao, from Padua, Italy, is a third-year starting point guard for the Roadrunners.

He made his remarks as UTSA (2-6) prepares to host NAIA Mid-America Christian (6-3) on Saturday at 3 p.m. at the Convocation Center.

“I still have open thoughts about everything,” De Nicolao said. “I didn’t make my mind (up), for sure. I’m … talking to people at home, about going back there and playing in Europe or in Italy.

“But, I also have the opportunity (to stay at UTSA). It’s always good to finish your four years eligibility and get a masters (degree).”

UTSA coach Steve Henson said he knew in the summer that this season might be De Nicolao’s third and last as a Roadrunner.

It all depended on whether his playmaker could take a heavier course load in the fall and the spring to earn an undergraduate degree.

De Nicolao said he is set to complete 17 hours this fall — he is currently holding down five ‘A’ grades and one ‘B’ — and another 16 hours in the spring.

He said he also needs to complete an internship next summer to complete his kinesiology degree requirements.

Henson said he is proud of De Nicolao for his work in the classroom, which will yield an earlier-than-anticipated degree, all while opening a door to get a jump start on a pro career — if that’s what he wants.

“It gives him options, which is great,” Henson said. “You never want to restrict someone in a situation like that. He made the decision to come to the (United) States. He came here to get a degree and play college basketball. The plan all along was to go back and hopefully play professionally back home.

“So, the fact that he’s able to do all that in three years is pretty impressive. But we didn’t want him to shut the door on the opportunity to come back (UTSA), you know. If we have a good year and at the end of the year he decides that he wants one more year, one more crack at it, we want that to be an option for him, as well.”

De Nicolao has started and played every game for the Roadrunners (76 in all) since arriving for the 2016-17 season.

UTSA is coming off a 69-68 home loss to Texas State last Saturday. Sophomore guards Keaton Wallace and Jhivvan Jackson are leading UTSA in scoring at 17.6 and 16.8 points per game, respectively. Jackson has played five games since returning from a knee injury.

“I like the mindset. We’re defining and refining roles a little bit more this week. I think everybody’s settling in and understanding the significance of that. Hopefully that’ll allow us to be more efficient offensively. That’s the big key right now. We’re playing pretty hard defensively … But offense is where we’ve got to be sharper.” — UTSA coach Steve Henson, on the team’s recent practices.