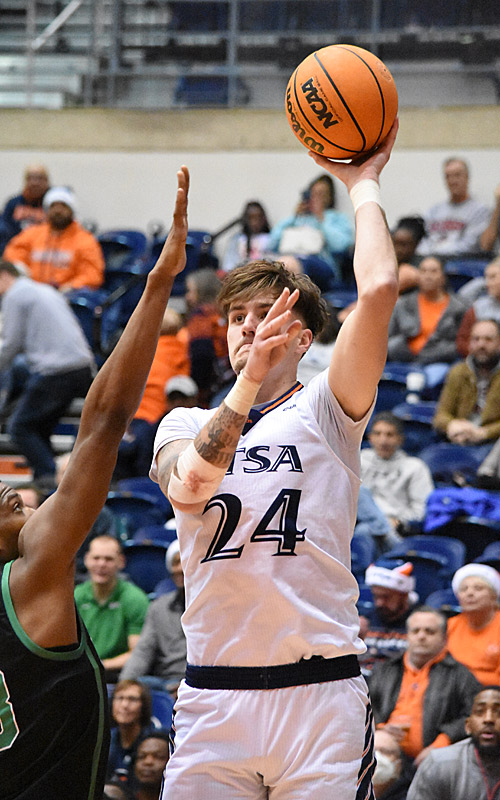 UTSA center Jacob Germany is expected to play Thursday night at home against the 24th-ranked FAU Owls. Germany is averaging 11.4 points and a team-leading 7.5 rebounds. – File photo by Joe Alexander

The Roadrunners, on a four-game losing streak, will play the explosive, once-beaten Owls on Thursday at 7 p.m. at the Convocation Center. Dusty May-coached FAU, from Boca Raton, Fla., moved into the AP Top 25 on Monday.

On Monday night, the Owls won at Western Kentucky for their 16th straight victory. All of which set the stage for a first — FAU will be the first ranked team that UTSA men’s basketball has hosted on campus. 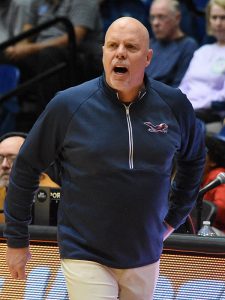 Coach Steve Henson made the announcement about Germany’s return from a concussion after his team’s Wednesday afternoon practice. The 6-foot-11 senior from Oklahoma has been out since he took a few blows to the head against UTEP on Jan. 11 in El Paso.

He has missed the team’s last two games.

“He looked good (today),” Henson said. “You could tell he was feeling good, just walking around the last few days. He’s looking good, feeling good. Process has gone a little faster than I would have thought.”

Another hopeful sign for UTSA centered on Isaiah Addo-Ankrah and 7-foot center Carlton Linguard, Jr., two other injured players, who also practiced on a limited basis. Neither, however, will be ready against FAU.

Henson didn’t say directly whether Germany would start, but things seem to be trending in that direction.

“He hasn’t been out that long, so the conditioning won’t be a big factor for him,” Henson said. “So, whether we start him or bring him off the bench, it doesn’t really matter. He’ll settle into that rotation and probably get some quality minutes.

“We’re excited to have him back.”

Through their 42-year history, the Roadrunners are 1-17 against ranked opponents, with the lone victory coming in December 1994 at 13th-ranked Arizona State, 87-85, in overtime. In their last meeting against a Top 25 foe, the Roadrunners lost 82-50 in November 2019 at 17th-ranked Utah State.

In the only previous occasion when the UTSA men hosted a ranked opponent in San Antonio, the Roadrunners were in their first season and in their first game, taking on Eddie Sutton’s 18th-ranked Arkansas Razorbacks on Nov. 30, 1981 at the old HemisFair Arena.

The Razorbacks, with future NBA guards Darrell Walker and Alvin Robertson, won 71-42 in the game played in downtown San Antonio at the former home of the Spurs. Once situated south of what is now the Grand Hyatt Hotel and north of the Tower of the Americas, the arena was razed in 1995 to make way for convention center expansion.

In regard to playing FAU, Germamy is a realist. He knows his team is struggling. But he said at courtside after practice that he’s excited about the possibilities.

“I used to say it more as a freshman, but I look forward to a challenge like that,” Germany said.

Germany sat out a 72-54 road loss to Charlotte on Saturday. On Monday, he also watched from the bench as his friends played well for most of the night against Rice, only to be outscored 21-5 in the last seven minutes of regulation and 16-9 in overtime — on their home court.

For the first time since he’s been at UTSA, he didn’t play and was forced to deal with all of those emotions.

“It was tough,” Germany said. “It was weird. Honestly, I can’t really even explain it, it was so weird. I haven’t missed a game since eighth grade. I felt, like, out of place almost … I felt like I wanted to help them.

“Man, such a terrible feeling. I hated that. I’m thankful I’ve been able to come back so fast. It’s the first games I’ve missed in my career here. It kind of opened my eyes to be thankful for my good health.”

Germany said he remembers getting hit with two elbows against UTEP in El Paso.

“One, on a rebound, hit me on the top of the nose,” he said. “The second one, there was actually a knot about the size of a golf ball on my head. I was fine after it happened. But once I got to the locker room I was so out of it, I don’t really remember it that much.

“The next day, flying (back to San Antonio), it didn’t really help. I was tired. Kind of just out of it a little bit.”

Germany said he’s worked his way back into physical activity the past few days, leading into the Wednesday practice, in which he went through half-court drills and ran some sprints.

“Today I had limited contact, and (on Thursday), I’ll be OK,” he said.

Coach Steve Henson said he thinks Isaiah Addo-Ankrah is close to playing again after rehabilitating a wrist fracture. Addo-Ankrah worked out on a limited basis Wednesday, doing some shooting on the side.

He won’t play against FAU on Thursday, but he’s expected to ramp up activity Friday. Henson said he doesn’t have “high expectations” that he could play Saturday against FIU, but said he could be back for a Jan. 26 road game at North Texas.

Addo-Ankrah, one of the team’s best three-point shooters, has been out eight-straight games — all in conference.

Center Carlton Linguard, Jr., who has not played this season, still has two hurdles to overcome before he can play. First, he needs to get healthy. In addition, he needs clearance from the NCAA on an academic issue.

Physically, he’s getting better. Out for much of the fall with a knee injury and then with a concussion, he did some work in half-court situations Wednesday. He also ran sprints and shot the ball on the side. Henson said he could transition into some contact work by Friday.

As for the possibility that he could be cleared to play from an eligibility standpoint, it is apparently in the hands of the NCAA. Henson said he hoped to hear something this week but said he didn’t have anything to report.