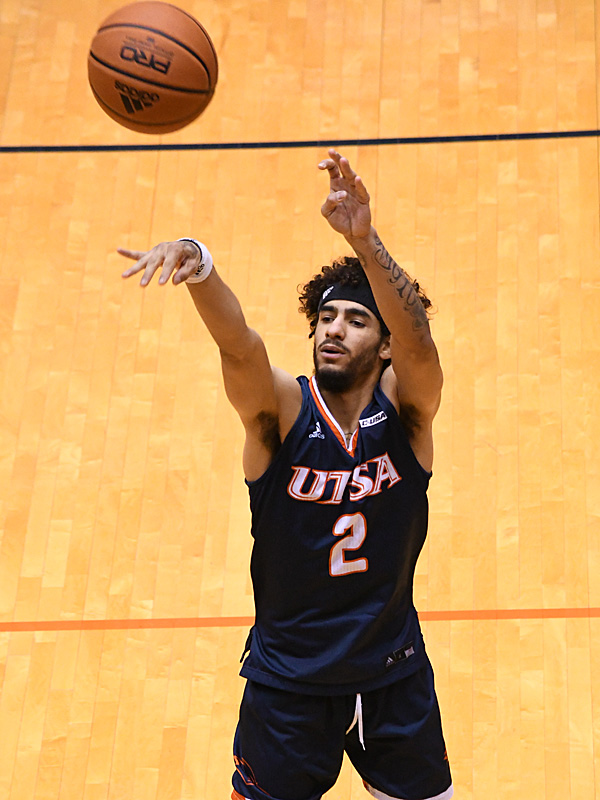 Jhivvan Jackson expressed surprise this week when he learned that he had become the leading career scorer in NCAA Division I among players born in Latin America. — Photo by Joe Alexander

One of the biggest came when he was growing up in Puerto Rico, and he knew he wanted to move to the U.S. mainland to further his ambitions as a basketball player.

To make the move effectively, Jackson had to learn how to speak English.

“My parents already knew my dream was to play college basketball,” he said. “In P.R., the school that I was going to, for two or three grades I went to bilingual school so already all my classes were in English down there. The only class I was taking in Spanish was an actual Spanish class.

“My parents, they knew at one point I wanted to come out here. They kind of wanted me to, early on, learn English. Like I say, I went to that bilingual school for a couple of years, and that got me right. I watched a lot of TV, and then when I moved for seventh grade I already knew English. I wasn’t fluent. You know, I had a strong accent. But I understood it.”

Jackson made the move to Texas. He went on to attend Euless Trinity High, where he became one of the best ball players in the Dallas area.

“It was a little challenging, obviously, but after a couple years, after eighth grade, I was already good,” he said. “I’m good at learning language. Like I said, I already had schooling and knew how it was. It was all about writing it and taking the accent away a little bit. But, everything was smooth. Like I said, my dad helped me with that. He did it with me and my brother. That got us better.”

As a basketball player, Jackson continues to improve.

He entered UTSA as a freshman for the 2017-18 season with high hopes but no guarantees. In that time, he has led the Roadrunners to winning records in three of four seasons.

Jackson has also created a splash with his offensive production, averaging 18.4 points as a freshman, followed by seasons of 22.9 and 26.8. This year, he’s averaging 20.4 as UTSA continues its quest for an NCAA tournament bid.

An important step comes tonight when the Roadrunners host the UAB Blazers. The Blazers, with 18 wins on the season, remain as one of the best teams in Conference USA despite having lost three of their last four in conference play.

As usual, UTSA coach Steve Henson will call on Jackson and fellow senior standout Keaton Wallace to step up to meet the moment. The two had power knocked out in their apartment last week during the winter storm. But they’ll be ready. It’s perhaps their last weekend at home, so the expectation is that they’ll put some pressure on the Blazers. Quite a bit of pressure, probably.

“He’s very dedicated toward it,” Jackson said. “Since he was a kid, he was always that way. Always. He loves working out. Basketball takes him away from everything that’s negative. That’s a sacred time for him.”

Ultimately, Jackson wants the NCAA tournament bid and he wants it badly.

Along the way, though, the spotlight will continue to shine on him because of his scoring prowess. Last year, he became the school’s all-time scoring leader. Two weeks ago, he moved into the Top 100 in all-time career scoring in NCAA Division I.

Earlier this week, he learned that he had become the top career scorer in Division I history among athletes who were born in Latin America. Jackson (with 2,461 points) has passed the likes of J.J. Barea, Greivis Vasquez, Luis Flores, Felipe Lopez, Khadeen Carrington and Rolando Blackman on the list.

Barea is a Puerto Rico native who played in college at Northeastern. Blackman came out of Panama and played years ago at Kansas State. Both enjoyed long NBA careers. Blackman, in fact, was an NBA all-star four times.

Jackson said it’s “crazy” to think about what he has accomplished.

“Some of those players are players I kind of look up to a little bit or have seen play growing up,” he said. “It’s kind of crazy that I passed them. But, obviously, all the credit goes to my hard work, my teammates and my coaches. They really were the ones that trusted me and put me in those positions to be the player that I am right now.”

Here is the list of athletes born Latin America who have been identified in the top seven in Division I career scoring: