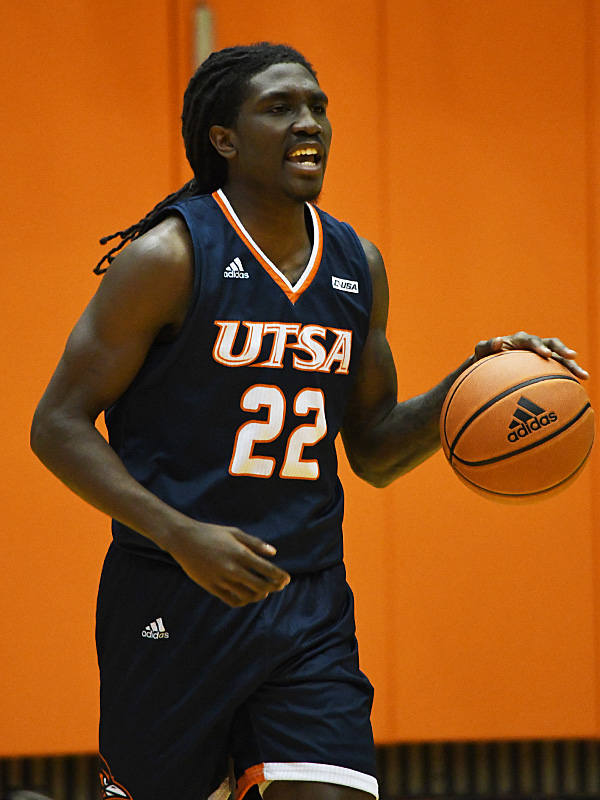 Keaton Wallace has emerged as the No. 2 all-time scorer at UTSA leading into perhaps his last two home games this weekend. – Photo by Joe Alexander

Riding on a bus down a West Texas highway earlier this week, Abilene High School basketball coach Justin Reese and his team were en route to a playoff game in Fort Stockton against El Paso Eastwood.

As anyone who has traveled through that part of the state knows, Reese had some time on his hands to do some things, such as return a phone call.

There was a voice message left on his office phone back in Abilene, an inquiry from a reporter about one of his former players, Keaton Wallace. So Reese dialed the number and started to field a few questions.

At an earlier stage of his career, when he coached the Richardson High School Eagles, Reese had the good fortune to watch Wallace grow as a player, from middle school to high school varsity and, ultimately, to college prospect.

The experience left an impression on the coach, who remembers the days fondly. Asked to recount the best memories, Reese started to unwind a few of them, stories that evolved into a 20-minute call.

“Well I have a lot of great memories of Keaton and his whole family,” the coach said. “You know, Keaton is one of the really special kids that I’ve ever coached. He comes from a great family. Mike and Kim (Keaton’s father and mother) are great people. And his younger brother, Cason, I just think the world of them.”

Today, the prospect Reese coached as a high school senior in 2016-17 has fully realized his potential as a college athlete. Wallace, a UTSA senior, is preparing for what likely are his last two home games with the Roadrunners.

With UTSA set to play a pair of Conference USA contests against the UAB Blazers, one on Friday night and the finale on Saturday afternoon, the Roadrunners clearly have benefited in every way from Wallace’s presence.

He has scored more points (1,964) than any other player in the program’s 40-year history except for Jhivvan Jackson (2,461). With Jackson and Wallace in the same backcourt for the past four years, UTSA emerged as one of the most entertaining offensive shows in the C-USA.

UTSA coaches admit that the two have surpassed even their own expectations. But it was interesting to hear Reese say in a telephone interview that he was not surprised at Wallace’s progression. From his experience, it’s like he knows now that it’s better never to underestimate the one-time “scrawny” middle schooler.

“I can remember my first memory of Keaton,” Reese said. “You see him now and he’s this tall, lanky, 6-3, athletic shooter. But I remember Keaton in middle school. At the feeder middle school as a little scrawny 5-2, 110-pound eighth grader who was just tiny but could handle it. Could just shoot it and had great vision. And could just do anything you wanted with the basketball.

“He was 5-1, 5-2, 5-4 going into eighth and ninth grade but he was starting to get the long arms. You could see that if he ever grew, he was going to be really, really good,” Reese said. “For his whole life, he just had great skills. Great ball handling skills. And shooting. He had great vision. You know, I can remember, as a junior, he really took the next step for us in high school.

“He kind of hit his growth spurt and got his confidence.”

Looking back, Reese said he was fortunate to have both Wallace and Brandon Averette (now at BYU) in 2015-16. Averette was a senior that year, and Wallace was a fast-rising prospect as a junior.

“We really had two of the best guards in the state,” he said.

Once Averette graduated, Wallace took charge. It was as if Wallace would not be denied.

“He’d go through a two-hour practice with us and then he’d go home and get some strength training in,” Reese said. “Then he’d go to the gym with his cousin, Terrel Harris, and then go do workouts for an hour or an hour and a half. Just, work on shooting and ball handling. He would do that every day.

“So, that summer before his senior year, I would watch him every day in open gym, in the skill workouts, and I knew. Somebody was about to get a steal in college. Sure enough, he got some offers.”

One moment in Wallace’s senior year at Richardson stands out for Reese. In January of 2017, Richardson hosted what Reese remembered as a No. 1-ranked and undefeated Dallas Skyline team, with Kansas-bound guard Marcus Garrett. The game went to overtime and Richardson emerged with an overtime victory. With Garrett guarding him, Wallace scored 35.

“We just put the ball in Keaton’s hands all game, and we got out of the way, and we just let him make plays for us,” Reese said. “Over and over and over. That was Skyline’s only loss all season until they lost at the state tournament in San Antonio. That was a special, special memory for Keaton and our program. It just shows you what a competitor he was.”

A few months later, Wallace signed with the Roadrunners. Looking back, Reese had a feeling that Wallace would turn into a good college ball player. But, 2,000 points good?

“UTSA was a great fit for him,” Reese said. “But it’s all about Keaton and his work ethic. So, anything he does, anything he’s done at UTSA, doesn’t surprise me a bit.”