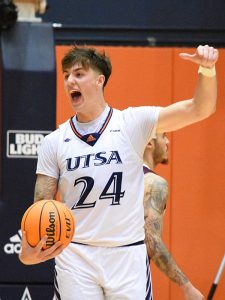 Jacob Germany and the UTSA Roadrunners host the Rice Owls tonight in the first of three home games this week. – Photo by Joe Alexander

A spokesman said Germany is “probably a game-time decision.”

Germany was hurt last Wednesday near the end of the Roadrunners’ game in El Paso. He sat out for the first time this season at Charlotte on Saturday afternoon.

UTSA plays at home three times this week instead of the usual two games, and the homestand starts tonight against the Rice Owls.

After facing high-scoring Rice, UTSA will also play the C-USA leading FAU Owls on Thursday night and the FIU Panthers on Saturday afternoon.

Germany averages 11.4 points and 7.5 rebounds, so his health is significant given the extra game on the schedule and also the team’s struggles — the Roadrunners have lost three in a row and six of their last seven.

Rice at UTSA, tonight at 7, at the Convocation Center

The Roadrunners are 7-4 at home this season. Their last victory was at home on Jan. 5 when they downed the Middle Tennessee State Blue Raiders, 75-72. On Jan. 7, the Roadrunners stumbled in front of the home fans, falling 74-64 to the Western Kentucky Hilltoppers. 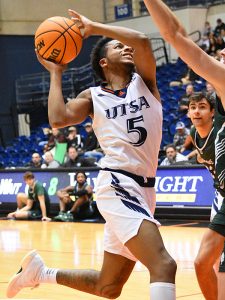 DJ Richards has averaged 10.3 points as a UTSA freshman. – Photo by Joe Alexander

Last week on the road, they lost at UTEP, 69-57, on Wednesday. On Saturday, with Germany sidelined, they fell 72-54 at Charlotte, dropping them into 11th and last place in the C-USA standings.

UTSA freshman D.J. Richards continued his solid first season with the program, scoring a combined 10 and 14 points, respectively, on the trip. With his performance at Charlotte, he ran his string of double-figures scoring games to six in a row.

In games at UTEP and Charlotte, the 6-foot-5 guard from Houston hit nine of 20 shots from the field and four for 11 from three combined. For the season, he’s averaging 10.3 points and 4.3 rebounds. His 38.4 percent accuracy from long range is second on the team to John Buggs III.

Rice downed UTEP 83-82 in Houston on Saturday. Guard Travis Evee hit a left-handed floater at the buzzer for the win. The Owls are 20th in the nation in scoring at 81.7 points per game. With talented long-range shooters, they spread out the defense by averaging 25 three pointers and nine made threes.