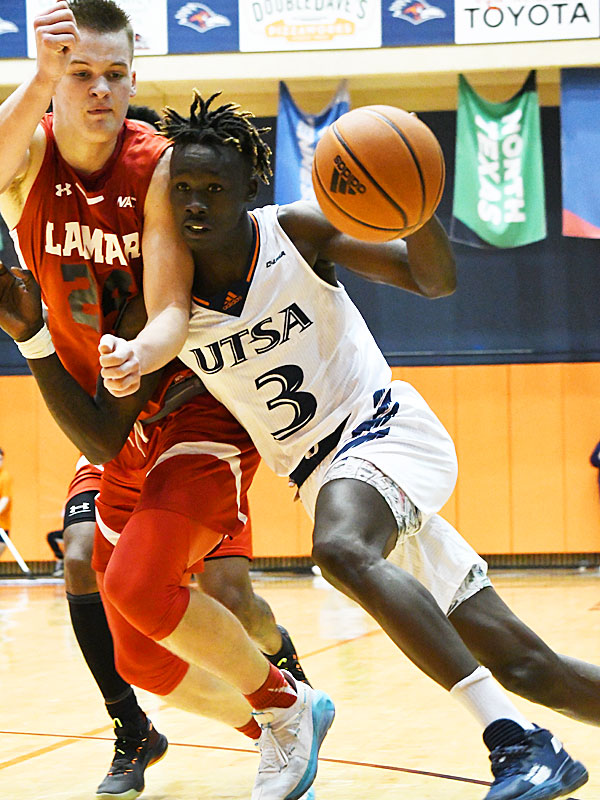 High-energy guard Dhieu Deing (No. 3) has left the UTSA basketball program. Deing was the team’s leading scorer at 15.3 points per game. – File photo by Joe Alexander

UTSA announced Thursday night that guard Dhieu Deing is no longer on the team.

“Dhieu Deing is no longer going to be a member of our basketball program,” a statement from UTSA athletics said. “He has elected to pursue professional basketball opportunities.”

UTSA coach Steve Henson says that guard Dhieu Deing, the team’s leading scorer, will not play when the Roadrunners host the Southern Miss Golden Eagles in a Conference USA game Thursday night at the Convocation Center.

“We’ll put out a statement on him in the next couple of days,” Henson said Wednesday. “I’m just going to leave it at that, for now. He will not be in uniform tomorrow night.”

Asked if Deing might also be out for Saturday afternoon’s home game against the Louisiana Tech Bulldogs, the coach declined comment.

The loss of Deing has emerged as the latest in a string of challenges for the Roadrunners, who have been erratic in their level of play all season and have had a mix of setbacks ranging from injuries, to players in Covid protocols.

Deing’s absence is not Covid-related, but it might be the toughest to overcome, especially if he is out for an extended period of time.

The 6-foot-5 junior, a newcomer, is one of the team’s best athletes.

Even though he has been mired in a slump, shooting 0-for-11 from the field in a 28-point loss last Saturday at UAB, Deing has averaged 15.3 points and 5.7 rebounds in 13 games played.

He sat out his first game of the season on Monday night when the Roadrunners pounded the Dallas Christian Crusaders, 101-48, in non conference.

In trying to adjust without him, Henson said the Roadrunners will miss his energy and his rebounding, but he said he hopes his players can use it as an “opportunity” to continue work on getting better shots in the offense.

“Southern Miss is a good defensive team,” Henson said. “It won’t be easy to get those good shots. Hopefully we can find a way to move it one more time. Get one more ball reversal. Get one more paint touch and a high percentage shot.”

As the Roadrunners move into the thick of the conference schedule, they’ll look to center Jacob Germany (14.4 points), point guard Jordan Ivy-Curry (13.9) and Cedrick Alley (9.4) and others to fill the scoring void for as long as Deing is out.

In Southern Miss, UTSA will need to defend against a low-post, oriented offense.

Cedrick Alley and reserve center/forward Phoenix Ford are expected to return to action Thursday. Alley fell in the road game at UAB last Saturday, and, consequently, Henson held him out Monday against Dallas Christian. Ford has been out for the last three games, including the trip to Illinois State on Dec. 21 for personal reasons. On Christmas Eve, his girlfriend gave birth to the couple’s first child. Since then, Ford has missed the UAB and Dallas Christian games in Covid protocols.

Deing, a native of Louisiana who grew up in North Carolina, played for two colleges before joining the Roadrunners this summer. He also played for South Sudan in a FIBA Afro Basket tournament last summer. At one point earlier in the season, he had four games of 20 or more points in a string of six outings. Recently, he has slumped, hitting only 8 of 45 shots from the field in his last three outings.

The Golden Eagles suffered a tough break in late November when they lost their leading scorer, Tae Hardy, to a shoulder injury.

Coach Jay Ladner’s team has since lost six in a row. They’re playing their first game since Dec. 21 when they lost by one at East Carolina. After a holiday break, they returned to campus only to have both of their first two conference games — against Western Kentucky and Marshall — postponed due to COVID protocols.

Louisiana Tech (11-3, 2-0) is regarded as one of the favorites to win the C-USA title. The Bulldogs won two at home last week, downing Marshall by 23 points and Western Kentucky by one. LA Tech is led by forward Kenneth Lofton, Jr. Lofton, who played on a USA national basketball team last summer, averages 17.5 points and 9.9 rebounds.