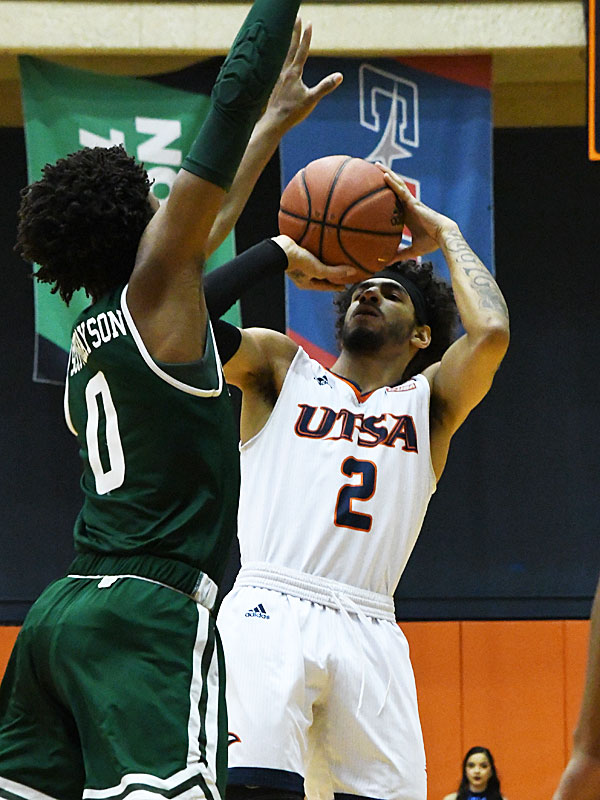 Jhivvan Jackson scored 28 points to lead UTSA past UAB on Sunday at the Convocation Center in Conference USA basketball. – photo by Joe Alexander

Trailing by nine points with 4:53 remaining Sunday afternoon, the UTSA Roadrunners didn’t seem to have the spark necessary to win on the first day of March.

But, you know what they say about March and college basketball.

Jhivvan Jackson exploded for 14 points in a maddening 16-0 run as the Roadrunners rallied for a dramatic 66-59 victory over the UAB Blazers. 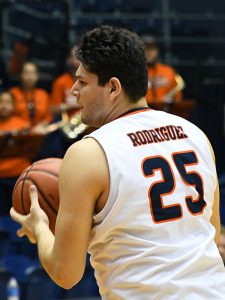 “I think once we started getting stops in the second half, that gave us that little intensity to get back on offense,” Jackson said. “We started making easy shots. I made a couple of shots.

“I got a couple of looks, and they went in. Coach gave me the trust just to go to work. I was kind of hot, and the shots went in.”

For most of the day, Jackson wasn’t his usual self, missing 15 of his first 20 shot attempts and picking up a technical foul mid-way through the second half.

But in a riveting span of 2 minutes and 24 seconds at the end of the game, he hit four three-pointers, sank two free throws, assisted on a basket and made a steal.

Near the end of the explosion, the nation’s second-leading scorer hit threes on consecutive possessions that had the home crowd at the Convocation Center roaring in approval.

On the first one, he drifted into the corner, jab-stepped inside the arc and then stepped back outside the line before drilling the shot.

“It happens all the time,” said Rodriguez, who started the first game of his career at power forward. “It’s insane. That kid has a lot of talent. I’m glad he’s on our team.”

For UTSA, the victory provided a boost to morale after a rough stretch in which the team had lost two straight and five out of seven.

With Jackson shooting poorly for most of the afternoon and some calls from the officiating crew not going their way, the chances for victory going into the last five minutes were not promising.

In that regard, it was an impressive showing to come back and win, and much needed, especially with the final two games of the regular season and the Conference USA tournament looming.

“This was an important win for us, just to get us re-charged. It would have been tough to bounce back (ordinarily) but I’ve been very impressed with our guys’ resiliency.

“I’ve mentioned that, almost every time we come off a loss, our guys have done great with that … We needed this one, for sure.”

UTSA at Old Dominion, Wednesday at 6 p.m. Marshall at UTSA, Saturday at 3 p.m. (End of regular season.) UTSA at the Conference USA tournament, March 11-14, at Frisco.

Struggling early in the game, Roadrunners tightened up on defense and emerged with a 23-23 tie.

UAB dominated in the opening minutes with a couple of dunks in forging a 9-3 lead. From there, UTSA started playing well, forcing the Blazers into awkward possessions and churning out a 14-0 run.

When Jackson hit a driving layup, the Roadrunners held a 17-9 edge.

Just as fast as the momentum shifted for UTSA, however, the visitors turned it around for themselves.

The Blazers kept Jackson bottled up during a 14-4 spree to produce a 23-21 lead going into the final minute.

Jacob Germany sneaks down the baseline and rises up for an alley-oop dunk on UTSA's last possession of the first half. Roadrunners and UAB Blazers are tied, 23-23, at intermission. https://t.co/hyCDEtJ4sq pic.twitter.com/LAbCTNTZN4

UTSA shuffled its starting lineup, with Rodriguez getting the start alongside Germany on the front line.

Wallace and Jhivvan Jackson started in the backcourt, along with Frohnen at small forward. Guard Erik Czumbel, a starter at point guard for most of the season, came off the bench and played 25 minutes.

Defensively, UTSA played well, holding UAB to an NCAA Division I opponent-low for scoring this season.