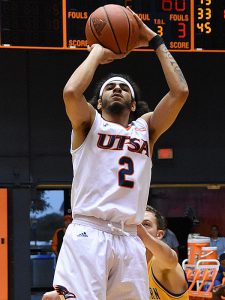 Jhivvan Jackson scored a career-high 46 points, the third most in UTSA school history.

In the game played at Bowling Green, Kentucky, the Hilltoppers overcame a career-high, 46-point effort from UTSA’s Jhivvan Jackson.

But it was Savage, a junior from Bowling Green, who hit the shots that mattered in the extra period.

His third in the overtime lifted the Hilltoppers into a 91-85 lead with 1:38 remaining.

UTSA made a crucial turnover in the final seconds of regulation that allowed Western Kentucky to tie the game and send it to overtime.

Byron Frohnen inbounded to Jackson, who tried to pass it back to Frohnen. But Bearden stepped in to make the steal.

Fouled on the play, Bearden went to the line and made one of two free throws, tying the game at 78-78.

The Roadrunners still had a chance as they rushed the ball upcourt, but a Giovanni De Nicolao runner was off the mark.

The loss negated one of the greatest individual performances in UTSA history.

Jackson hit 16 of 31 shots from the field, including 8 of 14 from three. The 6-foot sophomore from Puerto Rico was 6 of 8 on free throws.

In the end, he finished with the scoring record for an opposing player at E.A. Diddle Arena, the second most points in C-USA history and the third most in UTSA history.

Jackson drove for a layup and made a couple of free throws early in the overtime, but in the face of intense pressure from the Western Kentucky defense, he missed his last three attempts.

For Western Kentucky, Bassey sank 7 of 8 from the field and pulled down four rebounds off the offensive glass.

The Roadrunners had a four-point lead with a little more than a minute left in regulation and couldn’t close out the game. As a result, they were knocked out of first place in the C-USA standings.

“(I’m) sick for our guys. You know, we got to find a way to win that game. Just finish it. We turned it over, missed a free throw, turned it over again. We put ourselves in a position (and then) they make a couple of threes, bank in a three, and we lose. That just can’t happen. We gotta find a way to win that game.” — UTSA coach Steve Henson, in comments aired on the team’s radio broadcast.