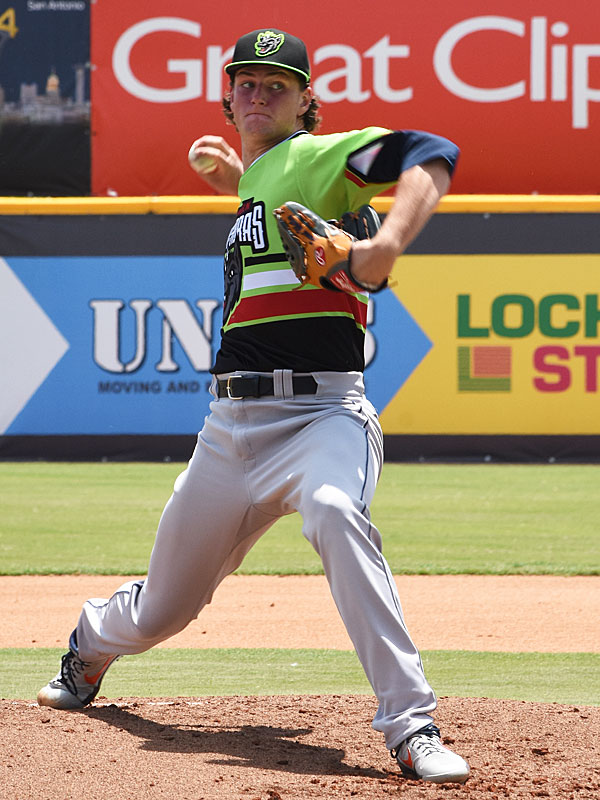 Former Alamo High School star Forrest Whitley starts the season on the 7-day injured list with the Houston Astros-affiliated, Triple-A Sugar Land Space Cowboys. He’s shown here in a 2019 game at Wolff Stadium, delivering a pitch for the Round Rock Chupacabras against the San Antonio Missions. – Photo by Joe Alexander

Former Alamo Heights pitcher Forrest Whitley will open the baseball season on the 7-day injured list with the Triple-A Sugar Land Space Cowboys, according to the team’s website.

Whitley, a 2016 first-round draft pick by the parent-club Houston Astros, is coming off Tommy John surgery.

The injury occurred last spring when Whitley was throwing live batting practice. Surgery was performed by Dr. Keith Meister in Arlington, according to an Associated Press story published in March 2021.

At the time, it was reported that the right-hander would miss at least a year.

According to information on the Space Cowboys’ website, the team will begin Pacific Coast League play Tuesday night in Sacramento. .

The Space Cowboys will return home on April 12 to open a series against the Round Rock Express.

Records indicate that Whitley hasn’t played in a game since the 2019 season. That year, he was 3-7 while pitching at four different levels in the Astros’ minor-league system.

Whitley, the No. 17 pick in the 2016 draft, remains as the team’s fifth-rated prospect. According to mlb.com, the Astros’ top prospects include shortstop Jeremy Pena at No. 1, followed by catcher Korey Lee, pitcher Hunter Brown, shortstop/outfielder Pedro Leon and Whitley.

Sugar Land’s team was formerly known as the Sugar Land Skeeters. It was an independent team until last year, when it aligned with the Astros and played a Triple-A schedule. The team re-branded to become the Space Cowboys during the offseason.

Texas Rangers prospect Josh Jung, the 8th overall pick in the 2019 draft, is also rehabilitating an injury as the new season dawns. The former standout at San Antonio MacArthur High School and Texas Tech University had surgery on his (non-throwing) left shoulder in February. He is expected to be out until August or September. Prior to the injury, he probably had a decent chance to make the major league ball club if he could have had a productive spring. Jung hit .326 with 19 home runs combined at Double-A Frisco and Triple-A Round Rock last summer.

Meanwhile, here is a list of players from the San Antonio area on opening-day rosters in the minor leagues:

David Hamilton/INF/Portland Sea Dogs/Double-A affiliate of the Boston Red Sox/from San Marcos HS and the University of Texas. Picked in the 8th round of the 2019 draft by the Milwaukee Brewers. Traded by the Brewers with Jackie Bradley Jr. and Alex Binelas to the Red Sox Hunter Renfroe on Dec. 1, 2021.

Hudson Head/OF/Greensboro Grasshoppers/High-A affiliate of the Pittsburgh Pirates/from San Antonio Churchill HS. Selected in the third round of the 2019 draft by the San Diego Padres. Traded to the Pirates, in January of 2021.

Ralph Garza Jr./RHP/Worcester Red Sox/Triple-A affiliate of the Boston Red Sox/from New Braunfels HS/the University of Oklahoma. Selected in the 26th round of the 2015 draft by the Houston Astros.

James McArthur/RHP/Reading Phillies/Double-A affiliate of the Philadelphia Phillies/from New Braunfels HS/Ole Miss. McArthur was selected in the 12th round by the Phillies in 2018.

Bryan Arias/INF/Corpus Christi Hooks/Double-A affiliate of the Houston Astros/from San Antonio Marshall High School and UTSA. Arias was drafted by the Astros in the 28th round in 2019.

Asa Lacy/LHP/Northwest Arkansas Naturals/Double-A affiliate of the Kansas City Royals/from Kerrville Tivy HS and Texas A&M. Lacy was the fourth overall pick in the first round of the 2020 draft out of A&M.

Forrest Whitley/RHP/Sugar Land Space Cowboys/Triple-A affiliate of the Houston Astros/from Alamo Heights HS. Whitley, the 17th overall pick in the first round of the 2016 draft out of Alamo Heights, is on the 7-day injured list.

Justin Anderson/RHP/Round Rock Express/Triple-A affiliate of the Texas Rangers/from Houston St. Pius X HS and UTSA. Anderson was a 14th-round draft pick by the Angels out of UTSA in 2014. He pitched for the Angels in the major leagues for parts of the 2018 and 2019 seasons.

Jordan Westburg/INF/Bowie Baysox/Double-A affiliate of the Baltimore Orioles/from New Braunfels High School and Mississippi State. Westburg was the 30th overall pick in the 2020 draft out of Mississippi State.

Hunter McMahon/RHP/Fort Myers Mighty Mussels/Single A affiliate of the Minnesota Twins/from Staley HS in Kansas City, Mo., and Texas State University. Ninth round pick of the Washington Nationals in 2019.

Justin Lange/RHP/Tampa Tarpons/Single A affiliate of the New York Yankees/from Fredericksburg and Llano High School. Drafted 34th overall on the second round of the 2020 draft by the San Diego Padres. Traded by the Padres to the New York Yankees organization for 1B Luke Voit on March 18.