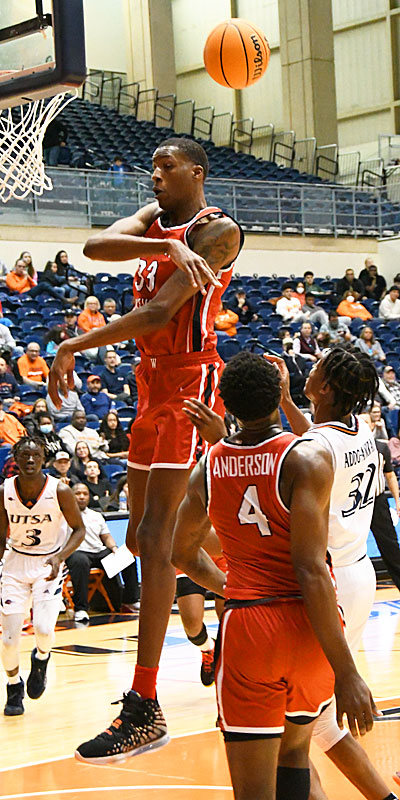 One of the traditional powers in Conference USA men’s basketball is in San Antonio to test the UTSA Roadrunners.

The Western Kentucky Hilltoppers (8-6 overall, 0-3 C-USA) will face the Roadrunners (7-8, 1-3) on Saturday afternoon at the Convocation Center. Tipoff is at 3 p.m.

Unlike previous meetings when both teams were playing for position at the top of the standings, this meeting is an outlier in the series, with both trailing in the 11-team field and trying to gain traction in the conference race.

A spokeswoman for the Western Kentucky program said that coach Rick Stansbury did not travel with the team because of a health matter, and, for the fourth straight game, assistant Phil Cunningham will be the interim head coach.

Regardless, UTSA’s Steve Henson knows that Western Kentucky has the ability to compete with just about anyone in the C-USA on a given day.

“You look across the board, coming up, and every team we play here in the next two or three ball games is either really good or really athletic. Or, they play incredibly hard,” Henson said. “Or all of the above. There’s just not a break.”

“Heading into the year, I thought the top three or four teams might be the best they’ve ever been. But as the season’s unfolded, five through 10 are really good. I think it’s the best top to bottom that it’s ever been.”

UTSA gave itself a jolt of momentum Thursday night when it won at home against the Middle Tennessee State Blue Raiders, 75-72. The Roadrunners led by 17 midway through the second half and then won by three at the buzzer.

Both Jacob Germany and Japhet Medor played well throughout for the Roadrunners, and then John Buggs III supplied the dramatic finish with a buzzer-beating three pointer.

“I think it’s huge for momentum,” said Germany, who had 23 points and 11 rebounds. “We can use this definitely as a stepping-stone in the right direction. You know, we started out 0-3 against good opponents, but … hopefully this jump starts us.”

Western Kentucky will be looking for a similar boost today. Only a few weeks ago, the Hilltoppers had an 8-3 record leading into the C-USA portion of its schedule.

Since then, they have lost their first three conference games by a combined 12 points — at home to the Rice Owls, on the road to Middle Tennessee State and at home again to the North Texas Mean Green.

Cunningham has led the team on the bench in all three games. Stansbury has posted four 20-win seasons in his previous six at the school.

Playing in Bowling Green, Ky., only two days ago, the Hilltoppers fell behind North Texas 21-2 in the opening minutes.

WKU didn’t score a field goal until 10:17 of the first half when guard Dayvion McKnight hit jumper from the left side of the basket. The Hilltoppers kept playing, kept scoring and pulled within 32-24 at the half.

Western Kentucky kept it close in the second half and trailed by single-digit margins through the last five minutes.

In the end, North Texas guard Kai Huntsberry provided enough cushion to secure the victory when hit three of four free throws in the last 40 seconds.

Dayvion McKnight, who led the Hilltoppers with 29 points, hit a shot with 15 seconds left to make it a three-point game. With Western Kentucky down by the eventual final score, McKnight missed twice from the field in waning seconds.

McKnight finished by hitting eight of 16 shots from the field and 13 of 15 at the free-throw line. He was 0-2 from three-point distance. Senior guard Jordan Rawls did not play because of a hand injury.

Western Kentucky center Jamarion Sharp leads the conference and the nation in blocked shots, averaging 4.36 a game, while teammate Luke Framton leads the conference with 50 percent three-point shooting. Hilltoppers guard Dayvion McKnight leads the team with 17.1 points per game. Japhet Medor leads UTSA with 13 points per game, while Germany leads in rebounding and is second in conference with 7.6 rebounds. John Buggs leads UTSA and is third in C-USA three-point percentage at 42.4.