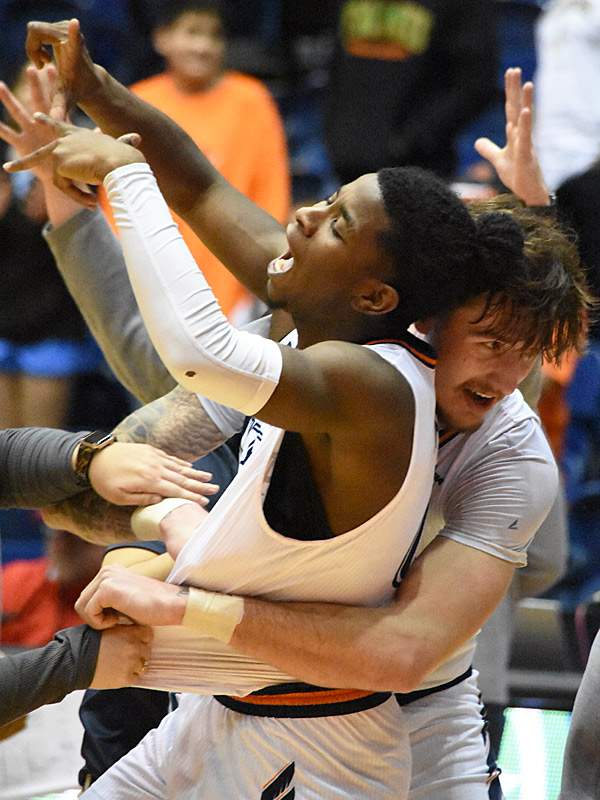 First, UTSA guard John Buggs III won the game with a three-point shot at the buzzer, and then he nearly got mobbed on his homecourt.

After Buggs drained the acrobatic jumper with a defender in his face to secure a 75-72 victory over the Middle Tennessee Blue Raiders Thursday night, he turned and outran his teammates, who had come off the bench in hot pursuit. 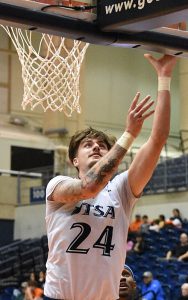 Jacob Germany produced 23 points and 11 rebounds, helping the UTSA Roadrunners improve to 7-8 on the season and 1-3 in the C-USA. — Photo by Joe Alexander

He ran all the way off the floor and out of sight, somewhere on the south concourse of the Convocation Center.

“They were about to tackle me,” Buggs said, smiling and shaking his head as he sat at the table in the interview room. “I was trying to get away from everybody, you know what I’m saying? It turned from one person into 17. It was crazy.”

If officials had polled all the fans, they might have voted unanimously that the whole game was sort of crazy.

The Roadrunners entered the evening riding a three-game losing streak. They held an 0-3 record in Conference USA and were playing to keep their heads above water early in a 20-game schedule.

Moreover, all three of their C-USA losses were by 20 points or more.

The Roadrunners, however, put all of that behind them and played perhaps their best game of the season. At least, for the the first 32 minutes of the game, they did.

When DJ Richards knocked down a three with 8:19 remaining, it boosted UTSA into a 60-43 lead.

Middle Tennessee, a 26-11 team last season, refused to fold. The Blue Raiders mounted a charge that cut into the Roadrunners lead and made it a four-point game with 3:47 left. 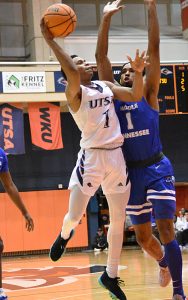 Roadrunners point guard Japhet Medor attacked the paint and scored 19 to help defeat a Middle Tennessee team that dropped to 9-6 on the season and 2-2 in the C-USA. The Blue Raiders won 26 games last season. – Photo by Joe Alexander

UTSA continued to lead by four as the clock ticked under one minute. Subsequently, Middle Tennessee started taking it to the basket off of middle ball screens.

Driving layups by Jestin Porter and Eli Lawrence chopped the advantage to one. Lawrence was fouled on his drive and sank a free throw to tie it 72-all with 13 seconds left, prompting UTSA to call time.

Back on the floor, UTSA inbounded on the far end of the court, 94 feet away from the rim.

As Roadrunners point guard Japhet Medor dribbled across halfcourt, Jacob Germany popped out to set a screen. Medor tried to get past the defense but was cut off, so he stopped and tossed the ball outside the 3-point line to Buggs.

Buggs caught it, elevated in preparation to shoot and then nearly had to double-clutch his attempt as Middle Tennessee guard Camryn Weston ran past him to contest. It didn’t matter. The shot was clean, swishing through the net at the buzzer.

“We ran a play for Japhet to get to the rim,” Germany said. “I was kind of on the three-point line cause I slipped the screen. I was calling for the ball. I see Buggs running out of the corner of my eye.

“He catches it. Double clutch. It was great.” 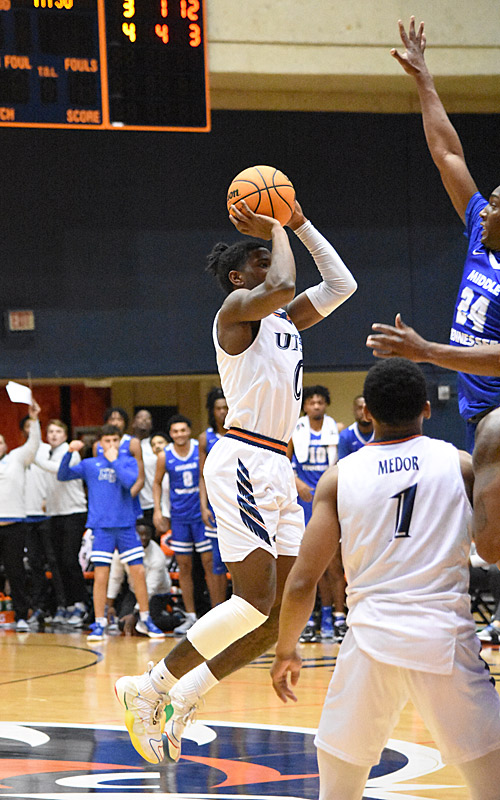 First in a sequence of photos capturing the game-winning shot: John Buggs III launches the eventual winner as Middle Tennessee guard Camryn Weston (No. 24, at right) leaps to contest it. – Photo by Joe Alexander 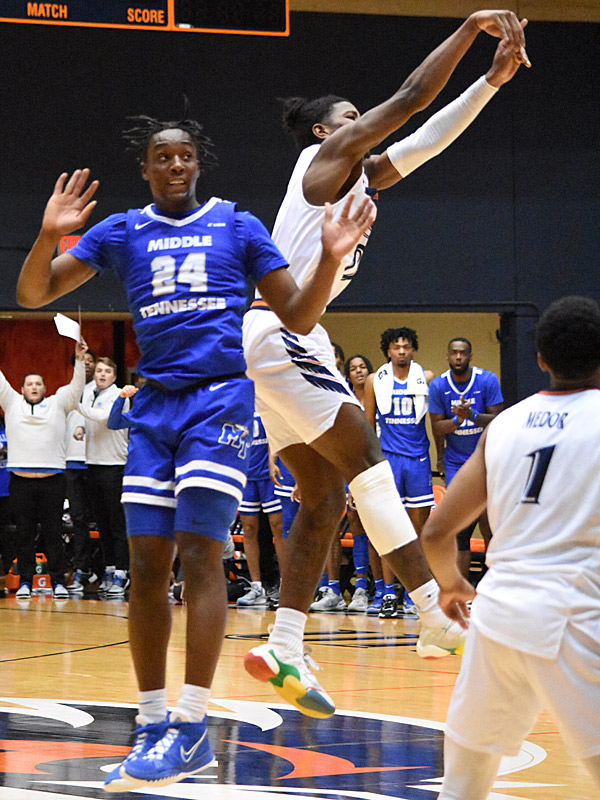 Second in a sequence: UTSA’s John Buggs finds an opening and follows through on his shot as Camryn Weston from Middle Tennessee turns to watch the flight of the ball. – Photo by Joe Alexander 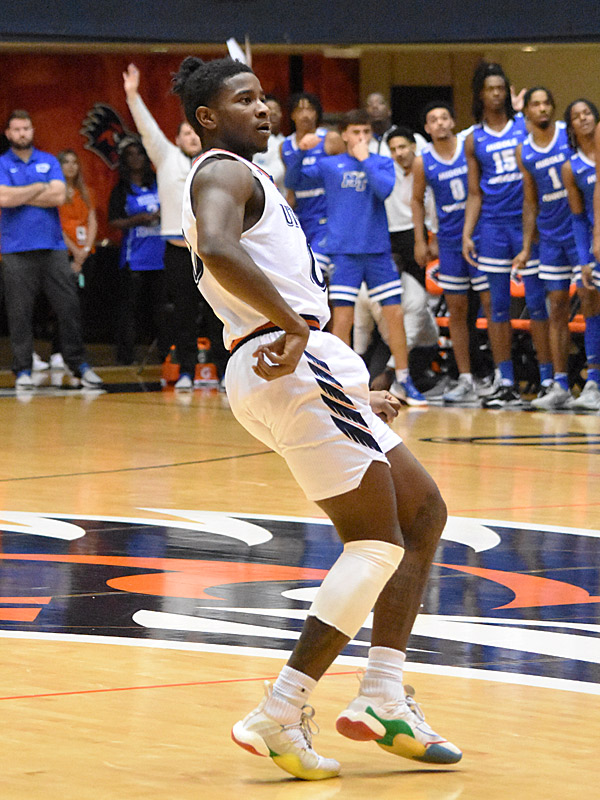 Third in a sequence: John Buggs watches the ball swish through the net to give UTSA its first C-USA victory of the season after three losses. – Photo by Joe Alexander

Middle Tennessee — Guard Eli Lawrence, 20 points on eight of 12 shooting. Guard Camryn Weston, 15, on five of 11 from the field. Jestin Porter, 12, on five of five shooting off the bench.

Germany hit four of seven shots from the field and scored 12 first-half points as UTSA surged to a 34-28 lead at intermission. Germany was active on both ends of the floor, snaring five rebounds including four on the defensive glass.

Medor also played well in the half, penetrating in the paint and scoring eight points. Forcing the action inside, Germany and Medor were a combined six for six from the free-throw line. Germany, with a height advantage on the Blue Raiders, was four for four.

Defensively, the Roadrunners did a good job on DeAndre Dishman, the Blue Raiders’ leading scorer. Dishman, slowed by a combination of different looks from UTSA, including a variety of zone defenses, was scoreless on the half. He was zero for two from the field. Weston led Middle Tennessee in the half with seven points.

Knocking down a buzzer-beater

Scoring in the paint