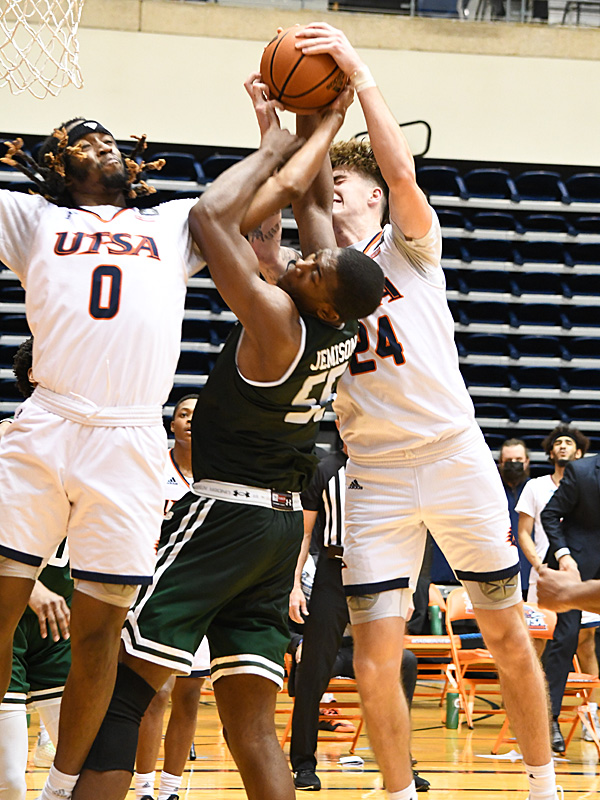 UTSA forward Cedrick Alley Jr. (left) teams with center Jacob Germany to hound a UAB shooter last year. Alley, once regarded as the top player in Texas Class 6A at Klein Forest High School, is acknowledged as the defensive leader for the Roadrunners. – Photo by Joe Alexander

After experiencing the sweetness of team success in college basketball at the University of Houston, Cedrick Alley Jr. never quite felt completely fulfilled on an individual level.

He hopes to taste both sensations this season as a senior with the UTSA Roadrunners.

In a candid interview, Alley, a former “Mr. Basketball” in Texas at Klein Forest High School, spelled out his hoop dreams in detail recently.

He laid them out there for all to analyze, as fans are known to do.

Alley wants to play in the NCAA tournament again, as he did a few years ago with the Cougars. Moreover, in his second year with the Roadrunners, he also hopes to make a run at Defensive Player of the Year honors in Conference USA.

All of it, he said, makes up a grand plan to help re-establish UTSA basketball tradition. Alley wants that, more than anything, as he prepares for his last ride as a college player.

“It is crazy to think about that, seeing (former teammates) go off and be able to hold up their picture (on Senior Day), and have everyone scream for them,” he said after Thursday’s practice. “It’s going to be a great feeling (for me).

“But I’m not so much focused on that as I am on … winning the Conference USA Tournament, and getting us where we want to go — to the NCAA Tournament. UTSA basketball. I feel like we can get there.” 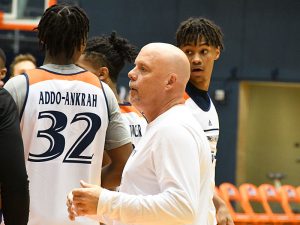 Coach Steve Henson says he thinks Cedric Alley, Jr., is playing with a renewed passion for the game – Photo by Joe Alexander

What makes him so confident?

“Our coaches have been real, real serious about defense this year,” Alley said. “We’ve hardly even worked on offense. So I feel one of our main goals this year is to be one of the best defensive teams in this league.

“I feel like our defense is going to take us as far as we want to go. We lock in on defense, and we can be in any game we play.”

At Houston, Alley redshirted his first year out of Klein Forest and then played 60 games over two years through 2019-20 with the nationally-ranked Cougars. At that juncture, he transferred, seeking a fresh start at UTSA.

With the Roadrunners last season, he battled through a series of minor injuries to average a modest 6.3 points, but he came on strong down the stretch as the team went 8-2 in the last 10 games of the C-USA regular season.

This year? Alley, at 6-6, 230 pounds, is sort of like the team’s defensive coordinator in the locker room. He takes the leadership role seriously, and he thinks that if he does his job, the team will win.

“That’s my expectation, and to hold the team accountable, if we’re not doing the job our coaches want us to.”

With a little more than three weeks remaining before the start of the new season, UTSA coach Steve Henson said he is more than happy with Alley’s work ethic and mindset.

“I don’t know if he alluded to it or not, but we kind of feel like he’s got a little of his passion back,” Henson said. “Sometimes when you go from being a superstar — you know, he was an elite high school player — it wasn’t easy (for him) at Houston.

“His role was diminished a little bit, and he didn’t have as much impact on the results … as he wanted to have.”

“He didn’t get off to a great start (for us) last year. Second half, he was pretty good. But he’s got a different approach right now. His offseason was much better this year. He’s much better conditioned.”

Last season, his conditioning failed him at times because of circumstances beyond his control.

Physical setbacks kept him from attaining peak conditioning at the outset of the season, Henson said, and then a groin injury in January in the C-USA opener at Rice added to his problems.

Additionally, with C-USA games scheduled for back-to-back days because of Covid-19 mitigation, Alley was hamstrung. He’d play one day but couldn’t get moving on the second day.

It wasn’t until Jan. 23 that he played as many as 19 minutes on Day Two of a back-to-back.

By the time Alley started feeling it physically, the monster snowstorm hit and the power went out in his apartment, forcing him to relocate to a teammate’s on-campus dwelling to stay warm.

“Crazy,” he said, thinking back to last season. “But, we’re here now, and we’re thinking about having a big year. A big year.”

From the outside, Alley’s talk of a title run for the Roadrunners is likely to be met with skepticism.

Ten seasons have passed since the Roadrunners last made it to an NCAA tournament. On top of that, as a C-USA member for the past eight seasons, they haven’t even made it past the tournament quarterfinals.

Alley, however, is confident. 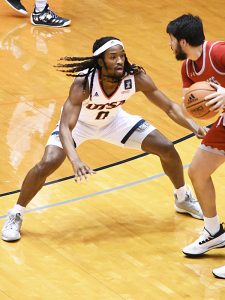 Cedrick Alley, Jr. says he wants to be the Conference USA Defensive Player of the Year and to lead the Roadrunners to the NCAA tournament. — Photo by Joe Alexander

Even without departed standouts Jhivvan Jackson and Keaton Wallace, he believes the Roadrunners’ players are up to the task. Taller at most positions. With longer arms to shut down passing lanes. And with enough offensive firepower to win.

Some of the offense may come from some of the youngest players, he said.

“Josh (Farmer), he’s like 6 (feet) 9 and he plays hard. Goes to the boards hard. He can go get a bucket any time. He’s looking very good on the court, very comfortable.

“Then we got Lamin (Sabally) from Germany. He’s very long. Defensive stopper. He steps up at big moments. And then we got AZ (Azavier Johnson) from Las Vegas. A big body.

“We’re looking for them to come in and give us everything they got.”

Leading the way is Alley, a guy with a charismatic personality who doesn’t mind taking on the challenge of elevating the program from good, to better than good — all the way back to the Big Dance.

“I want to get UTSA on the map, (to let people know) that we’re here for basketball, and that we can compete at the highest level,” he said.

UTSA center Jacob Germany told us last season he might try to expand his range to the three-point line. Well, it happened at practice Thursday when the 6-11 junior knocked one down out of the corner. https://t.co/hyCDEtJ4sq pic.twitter.com/YdOlGdTotV