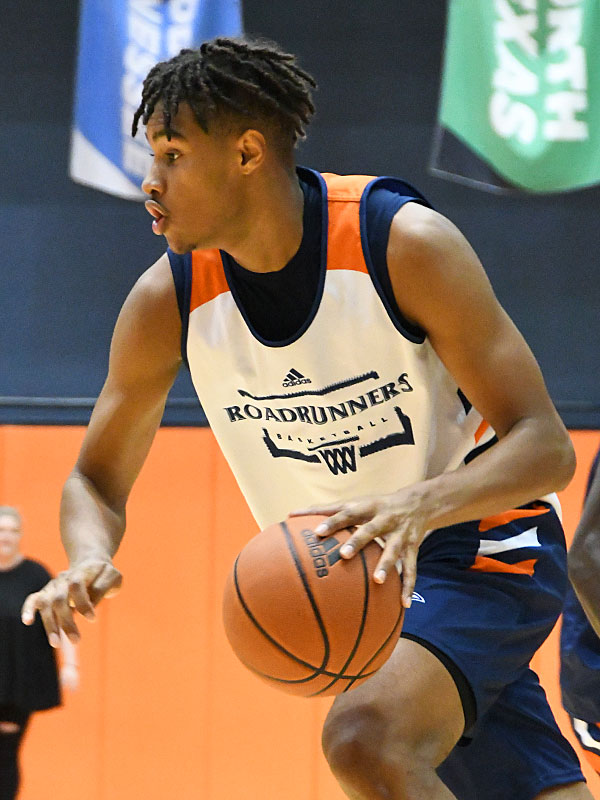 Lamin Sabally is a 6-foot-7 freshman guard/forward from Germany. – photo by Joe Alexander

Freshman forward Lamin Sabally has returned to drills with the UTSA Roadrunners after sitting out four or five practices with a concussion early in the preseason camp.

UTSA coach Steve Henson said Tuesday that Sabally has been working his way back into form since re-joining the team on the floor last Saturday.

“He’s been fine (physically),” Henson said. “He didn’t lose much in that short of time. No effects of that whatsoever. He just jumped right back into it.”

UTSA has been in practices for nearly two weeks in preparation for a Nov. 9 season opener against Trinity.

Sabally, at 6-7 and 195 pounds, plays a fluid style that should complement the Roadrunners’ other rotation pieces in the frontcourt.

“We’ve never had a roster with that many long forwards, guys that could play multiple positions, (with) that much length, and pretty skilled at that position as well,” the coach said.

Henson said he has liked the looks of his team’s defense to this point but acknowledges that “we’re searching a little bit right now” in terms of identifying an offensive style.

“We’ve got different guys with the ability to create, and move the ball,” he said. “We can trust virtually everybody to make plays, which is a good sign.”

Henson said the Roadrunners are hopeful of being multi-dimensional on offense, with several scoring threats.

“Everybody can handle it well enough on the perimeter that we can play with five guys on the perimeter quite a bit,” the coach said. “If we can get four guys around (center) Jacob (Germany), that looks pretty good, as well.

“Still searching for a little more attack, seeking fouls, driving it down into the paint. We’re going to continue to look for that.

“It’s not like one or two guys are carrying the load in that regard.”

Sabally, from Berlin, in Germany, is from a basketball family. Satou Sabally, his sister, has played two seasons in the WNBA with the Dallas Wings. She was the No. 2 overall pick in the 2020 WNBA Draft out of Oregon. Nyara Sabally, another sister, is a junior at Oregon.

Lamin Sabally played internationally for the ALBA Berlin U18 team in 2018-19 in the Munich League before coming to the United States. He also played for the club team Tusli Lichterfeld in Berlin. Sabally moved from Germany in 2019 to play prep basketball in Arizona.

UTSA forward Aleu Aleu, a 6-8 junior transfer, has sat out most of the team’s camp with an unspecified injury. He was out again Tuesday after making it through about half of Monday’s workout …