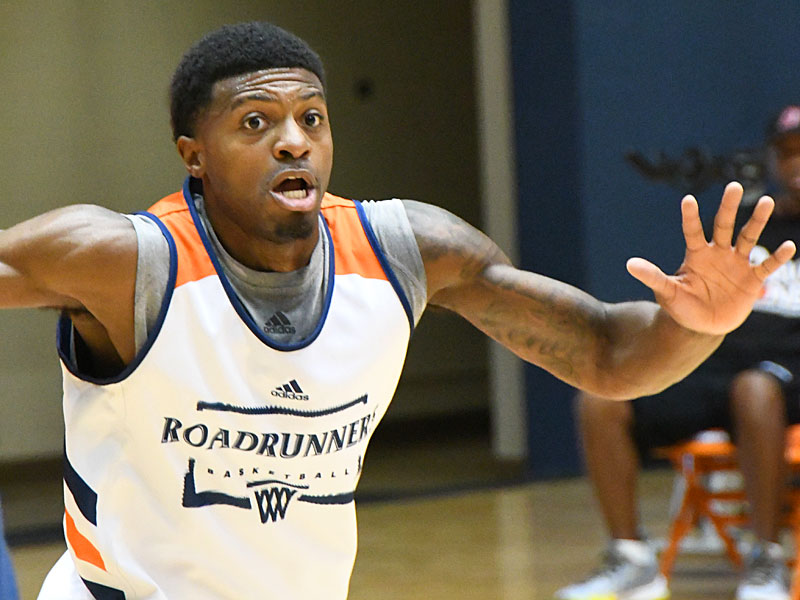 While the coach is not naming any names, it has become evident to anyone watching practices that point guard duties and floor leadership responsibilities will fall to senior transfer Darius McNeill.

McNeill, who has played at the University of California and at SMU, looked sharp in running the show in practice on Thursday afternoon.

When he wasn’t finding cutters to the basket with crisp bounce passes, he was pulling up to knock down shots, showing that he’s capable of hitting from both inside and outside the 3-point arc.

“He’s getting more comfortable,” Henson said. “I think he’ll continue to do that. Just trying to get him to free up his mind a little more. He’s very, very talented.

“He’s thinking too much right now. Part of it is, everything’s new. New terminology. New schemes.”

Even though the team is sort of in search mode right now with lineups and rotations, Henson agreed that McNeill is starting to find a rhythm.

“(Today) was one of his better days,” he said. “I just thing every day he’s with these guys and around the terminology and the coaches, I think he’ll continue to get more comfortable. That’s very important to him. Trying to free his mind up. (Trying to) use his talent right now.”

With the Roadrunners set to play eight games in November, an intriguing question centers on how much of an impact that talented, 6-9 freshman forward Josh Farmer can make right away.

“It’s going to be fun watching him,” Henson said. “There’s not a question of if (he can play). I mean, he’s so talented, and he’s very coachable. Got a great basketball IQ.

“You tell him something once and he’s got it. Great attitude. He’s going to be a big contributor.”

“We need to speed up that process. We’ve talked about that with our coaches, with some of our players, as well. They know it. They can see it. Anybody walks in the gym whether you know anything about basketball or not, you can see his talent.

“We just got to speed that process up and see how he can impact games. You know, right now, he’s behind some other guys. But he’s also got a ton of upside.”

Slowed by a soreness in his right foot, center Jacob Germany sat out most of Thursday’s practice as the UTSA Roadrunners continued preparation for their season opener, now less than a week away.

The adversity involving one of the team’s top offensive weapons comes at an awkward time with the Roadrunners trying to fine-tune for their season opener next Tuesday night at home against cross-town neighbor Trinity University.

Henson said Germany suffered the injury in practice on Wednesday.

“I was pleasantly surprised when I walked out here (today) and saw he wasn’t in a boot,” Henson said. “He went down really hard. Twisted it badly. He was in a ton of pain yesterday. Sure thought he’d be in a lot worse shape than he is today.

“That was pretty encouraging when I walked out and saw him walking around a little bit.”

Germany participated in a shooting drill and then didn’t do much else the rest of the afternoon.

“Nothing anywhere near game speed but the fact that he wasn’t sitting around in a boot was good news,” the coach said.