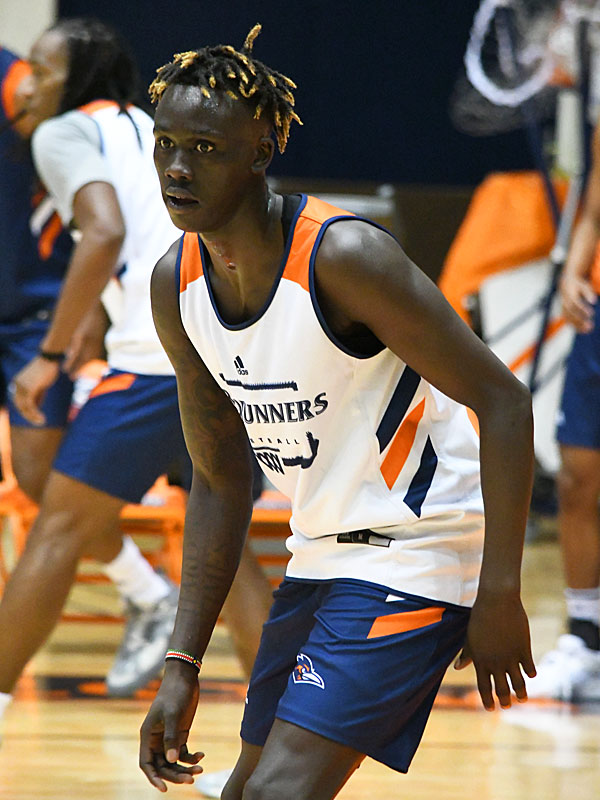 By Jerry Briggs
Special report, for The JB Replay

As an American-born son of parents who grew up in northeastern Africa, UTSA forward Dhieu Deing has an almost ever-present smile on his face.

It’s a clear indication that he is grateful for the chance to pursue an NCAA Division I basketball dream. 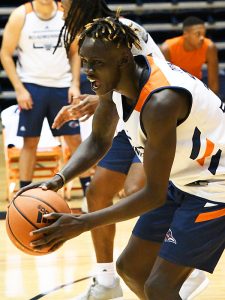 Dhieu Deing is a 6-foot-5 guard/forward who comes to UTSA from Dodge City (Kan.) Community College. His family’s roots are in Africa, in South Sudan. – Photo by Joe Alexander

Preparing to play his first season with the Roadrunners, Deing says he thinks virtually every day about how much his parents sacrificed in their lives and how fortunate he is, as a result.

His mother and father, after all, would walk for miles through the Sudan some 25 years ago to flee an armed force determined to take over the area where they lived.

Once, he said, his parents picked up their six-month-old son – Dhieu’s older brother — and fled. They trekked all the way, on a north-bound path, to the nation of Egypt.

Soon after the family arrived in the United States, Dhieu (pronounced dill) was born in Lafayette, La. The family later moved to North Carolina. Deing (pronounced ding) was in fifth grade when his father passed away.

“We lived in a shelter for about four years, five years,” he said. “So, it was a long childhood. I’m just blessed I didn’t have to go through (the experience of) army people coming to my house, trying to kill me and things like that. Trying to force me out of my house.

“My mom tells me stories every day. How she had to walk through fields, from country to country, I can’t even imagine how she went through all that. Every day I wake up and think about the sacrifice she put in for me.”

Deing, a 6-foot-5 guard/forward, evolved from these humble beginnings into an all-state player at High Point (N.C.) Central High School. He played a year in college at Division II South Carolina Aiken and then spent last season in junior college at Dodge City, Kan.

Over the last nine months, Deing has turned heads in the basketball world.
In the spring, he averaged 19.1 points per game at Dodge City, in the Jayhawk Athletic Conference. On top of that, he played in August and September for South Sudan’s national team in the FIBA AfroBasket tournament in Rwanda.

At age 20, he was the youngest player for South Sudan, which has been a country for only 10 years. In South Sudan’s first appearance at AfroBasket, Deing averaged 11.3 points, 2.8 rebounds and 2.3 assists. His team finished a surprising seventh out of 16 teams.

“It was a really good opportunity for him,” UTSA coach Steve Henson said. “He was the youngest guy on his team. His country is one of the youngest countries in the world. So, they haven’t been on that stage before.”

Deing made the 12-man roster for South Sudan during a tryout camp held in Kigali, Rwanda, the nation’s capital city. He said about 25 players reported for the camp, and the competition to make the team was intense.

Adding to the pressure of the tryouts, for Deing, were the elements. The town of Kigali sits in a hilly region, at more than 4,100 feet above sea level.

“The altitude in Africa is way crazy … (camp) was going on for two or three days, and I’m contemplating whether I’m going to make the team,” he said. “People are like, ‘What’s going on?’ We were real tired. But once I adjusted, it was all right, from there.”

In South Sudan’s 88-86 victory over Uganda, Deing came off the bench to hit 7 of 15 shots from the floor. He scored 22 points, earning the praise of coach Royal Ivey.

“He can play,” Ivey said after the game. “He put on a show today for the world to see, that he is going to be around on this national team for a long time.” Added Uganda coach George Galanopoulos, “No. 6, he is a hell of a player, to be honest. He made some tough shots.”

Henson applauded the efforts of the South Sudanese team, which was organized by former NBA player Luol Deng.

“The expectations from the outside, I don’t think were very high for them,” Henson said. “I think they showed some people (what they could do). They overachieved and did some things that haven’t been done.

“I think as a group they felt good about it, and (Deing) certainly had a couple of really good games. He got a lot of people’s attention over there.”

Henson said Deing has had a good camp with the Roadrunners.

“You can see that. On the heart-rate monitors, he’s got the highest numbers every single day. That’s because he’s flying around.

“First few practices, we weren’t sure why his numbers were so high. It’s just, he gets from Point A to Point B and never stops moving. Offensively. Defensively.”

UTSA’s African connection this season doesn’t stop with Deing. His cousin is Aleu Aleu, a 6-8 forward who was born in Kenya. Aleu moved to the United States, attended high school in Austin and then moved on to Temple College. 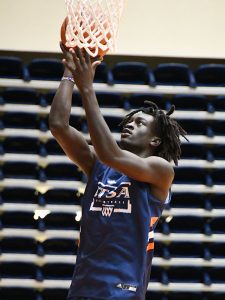 Aleu Aleu, a 6-8 junior, is a newcomer out of Temple College. Aleu, who has been limited in workouts because of a leg injury, is from Kenya. – Photo by Joe Alexander

Both committed on the same day last year.

“Me and my cousin, Aleu, we decided, this is the perfect spot,” Deing said. “Coach Henson brought me and Aleu in. We just thought, we’re going to have to do this.”

Coaches are hopeful that Aleu will become a contributor in time, but, thus far, he has been limited to light workouts while rehabilitating an injured quad. Deing says he thinks Aleu will return to workouts soon.

Deing has had his ups and downs in UTSA practices. One day last week, he started workouts by making a couple of turnovers and then briefly hanging his head.

Later in the workout, he picked up the intensity and hit two 3-pointers, one of them from the corner as the clock was winding down.

“Sometimes I’m like that. I’m human. I make mistakes. I’m just trying to come back and fight better.”

Deing is a competitor who says he is inspired in basketball by Deng, the former All-American at Duke University who runs camps in America for South Sudanese athletes.

He also admires his mother, who works long shifts for a clothing manufacturer in North Carolina.

Long ago, she sacrificed for the family in the face of extreme adversity.

“That’s why I talk to her every day,” Deing said.

“She’s a sweet, sweet, sweet lady,” Deing said. “To me, she’s strict. But to everyone, she’s this loving person. I love my mom. I really don’t know how to explain it. She’s just like, always smiling. Never a dull moment. Always got confidence in me, even when I don’t have confidence in myself.

“She knows that I’m going to be doing something like Lu (Deng) one day. Giving back to the young kids like me. Wanting to do something big.”

Newcomer Dhieu Deing circles to the baseline, drives and makes a sweet dish to Lachlan Bofinger, who gets an easy layup during UTSA's first practice. https://t.co/hyCDEtJ4sq pic.twitter.com/1JTHdteJhi