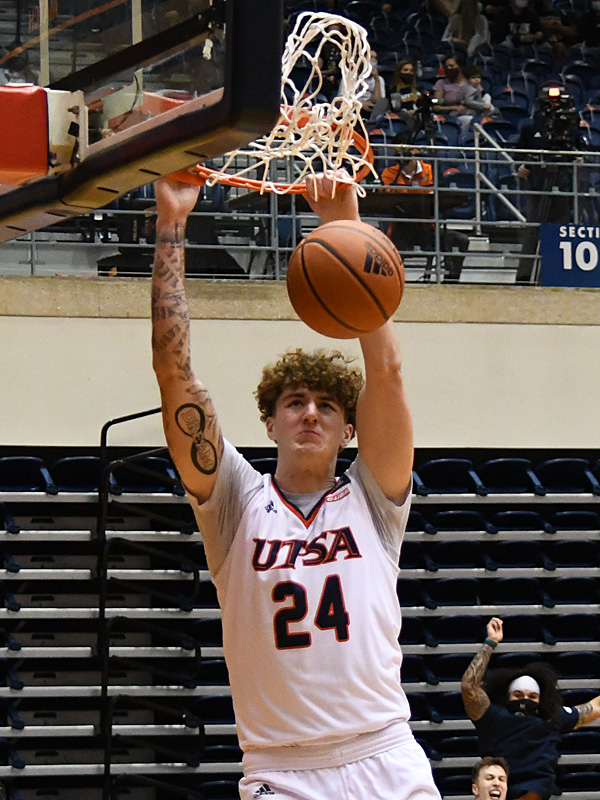 After twisting his foot earlier this week, UTSA center Jacob Germany has continued to practice on a limited basis, aiming to play in the season opener Tuesday night at home against Trinity. — File photo by Joe Alexander

Fighting through discomfort in his right foot for the second straight day, UTSA center Jacob Germany should be able to play in next week’s season-opener for the men’s basketball team, Roadrunners coach Steve Henson said Friday afternoon.

“Based on what he did today, I’d be shocked if we didn’t play him some,” Henson said after a workout on campus.

UTSA will open on Tuesday night in its 41st season of basketball with a doubleheader at the Convocation Center.

The women’s team will host Stephen F. Austin at 5, followed by Henson’s men’s squad against the Trinity University Tigers at 7:30.

Earlier this week, on Wednesday, Germany’s status for the opener was clouded when he went down and with an injured foot or ankle.

“Twisted it badly,” was how Henson described the mishap.

On Thursday, Germany was limited to shooting the ball in his on-court work. By Friday, though, the 6-foot-11 junior participated in most of the practice, even in some of the half-court drills.

The only time he sat out was in the five-on-five, full-contact work.

“On one hand, you feel like that game (against Trinity) is right around the corner,” Henson said. “On the other, with the amount of treatment he’ll be able to get between now and then, that game’s a long way off.

“(Trainer) Josh (Modica) will take good care of him tomorrow,” Henson said. “We’re doing nothing together on Sunday as a team, so that’ll be a great recovery day, a great treatment day. Just guessing, just like you are, but I think he’ll be close to normal on Tuesday.”

Germany has enjoyed a highly productive preseason, showing off an expanded offensive repertoire.

Last year, as a sophomore, he averaged 10 points per game with most of the production coming on dunks, short hooks and mid-range jumpers.

This fall, he looks much more versatile. He regularly knocks down shots from the 3-point line. Germany, a natural lefthander, was even seen recently making a right-handed hook.

Obviously, he is expected to be a lynchpin for the Roadrunners.

Henson hasn’t named his starting lineup or the players he plans to play regularly leading into the month of November. But he said he might have a nine-player rotation.

If Germany is ready physically, he is expected to start at center. Senior Cedric Alley Jr. likely is the power forward. On the wings, the Roadrunners appear to be leaning toward a backcourt of Darius McNeill and Jordan Ivy-Curry, with Dhieu Deing at small forward.

Others who appear to be in the plans for the rotation, based on what has transpired in recent practices, are highly-touted freshman Josh Farmer, and also Lachlan Bofinger and Lamin Sabally, all of them forwards. Erik Czumbel is expected to back up at both guard spots, with Phoenix Ford coming in to spell Germany.

Farmer played last season at Houston Sharpstown High School, where he was regarded as one of the top forwards in the state. Sabally, another freshman, played at a prep school in Arizona last season after moving from his native Germany.

“Lamin’s been stringing together a lot of good practices,” Henson said. “I mean, he’s been really, really good.”