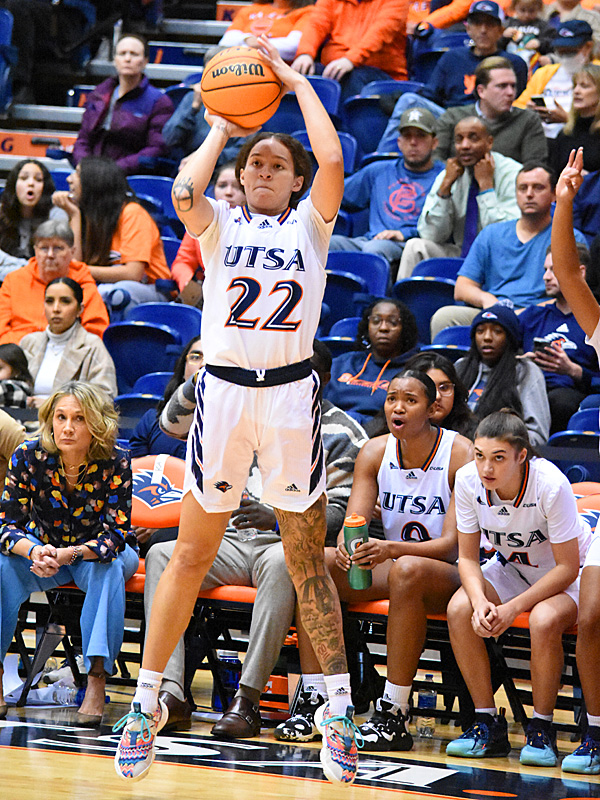 Versatile guard Kyra White has averaged 7.8 points, 4.8 rebounds and 4.0 assists despite playing five of her first six games away from home. – Photo by Joe Alexander

Saying bluntly that “we’ve got to grow up,” UTSA women’s basketball coach Karen Aston wants her players to acknowledge inconsistencies on the defensive end that have led to a 1-5 start to the season.

“We’ve got to do things better,” she said.

The schedule has been an obvious factor in the first month, with Aston’s Roadrunners losing all five games played away from the Convocation Center. 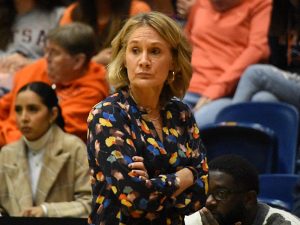 UTSA coach Karen Aston has challenged her team to step it up defensively. – Photo by Joe Alexander

But on the eve of a Saturday afternoon home game against the University of Idaho, Aston downplayed the schedule and instead lamented what she called a “passive mentality” on defense that has led to an opponent parade to the free-throw line.

Even though UTSA has played three road games and two at neutral sites, it’s never a good thing for a coach to see that wide of a disparity. For the team to succeed in the long term, defending without fouling must become a priority.

“We have to get better,” Aston said. “We have to get in better position. We have to get more disciplined with what we do on the defensive end, because it’s overwhelming right now, the difference in the free throws.”

At least some of the disparity stems from the nature of the game. Ever since Dr. Naismith hung up the peach basket, home teams at all levels of the game have always shot more free throws.

In addition, it’s also true that teams with young and inexperienced players in key roles always tend to get beat up on the road.

But with games looming at Incarnate Word on Dec. 15 and at Houston on Dec. 19, followed by the start of the Conference USA schedule on Dec. 29 at home against Louisiana Tech, it’s a critical juncture of the schedule for the Roadrunners.

If they’re going to win consistently in the spring, when it matters, they need to start making necessary adjustments now.

“We have to be more disciplined and communicate better,” Aston said. “That’s just because we’re throwing so many young kids in the mix, so many that didn’t play last year. I mean, it’s just part of it. We’ve got to grow up. We’ve got to do things better than we’re doing.”

Aston said the Roadrunners, generally speaking, have been guilty of being out of position and reaching to make stops.

“I say this all the time, sometimes you can make a mistake by getting beat, but you don’t want to double it by fouling,” she said. “That’s what we’re doing … We’re getting beat. We’re letting someone have position, or cut on us, and then we’re late to help, so we foul. Or, we get beat and we foul.

“So we have to make some adjustments. We have to get better.”

Like UTSA, Idaho has struggled in the early going of the season. But Vandals forward Beyonce Bea is eighth in the nation in scoring, averaging 22.6 points on 50.9 percent shooting from the field. The 6-1 native of Washougal, Wash., is also averaging 9.4 rebounds …

Coach Karen Aston said she hopes to know “in a couple of weeks” whether 6-foot-4 center Nissa Sam-Grant will be able to play this season. Sam-Grant, a transfer from Panola College, is academically ineligible. Aston declined to speculate on what will happen with an appeal to the NCAA. Despite the uncertainty, Sam-Grant has improved by continuing to practice hard, the coach said.