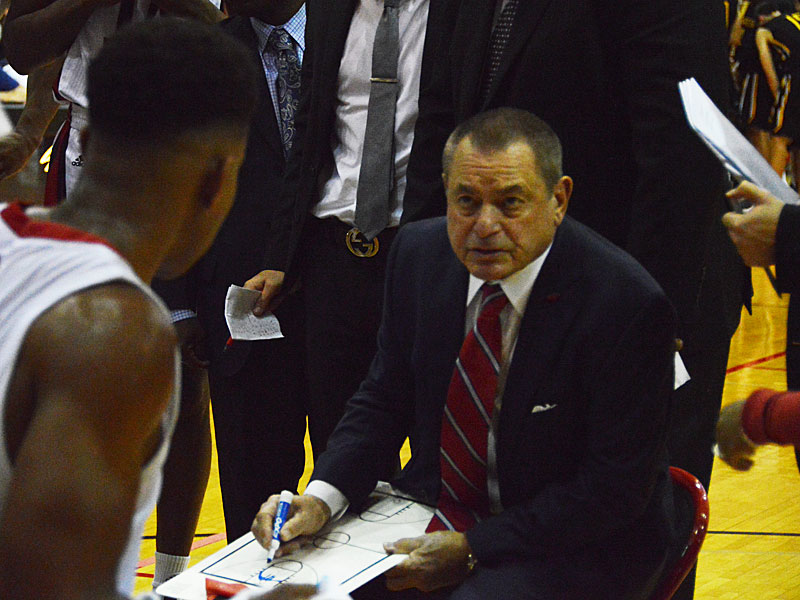 Ken Burmeister won 311 games in a 21-year career with head coaching jobs at UTSA, Chicago (Loyola), Trinity and the University of the Incarnate Word.

Friends and basketball coaching colleagues on Tuesday paid tribute to the late Ken Burmeister, a fiery head coach who led programs at UTSA, Trinity and the University of the Incarnate Word in San Antonio.

The passing of Burmeister, 72, was reported first in a tweet from former UIW assistant coach John Smith.

Burmeister, who won 311 games in a 21-year head coaching career, is best known for leading the UTSA Roadrunners to their first NCAA Tournament appearance in 1988.

He posted two 20-win seasons in four years with the Roadrunners through 1990.

Most recently, Burmeister worked a dozen seasons at UIW.

In 2013-14, UIW opened a four-year transition into the NCAA Division I Southland Conference.

Under Burmeister, the Cardinals posted road eye-opening victories at St. John’s and at Nebraska in their transition.

His combined record has been calculated at 311-281 based on an online examination of his tenure at UTSA, Loyola-Chicago, Trinity and UIW.

Rest In Heaven Coach Burmeister 🕊. San Antonio, and ALL of college basketball family and friends has lost a pillar. My boss who believed in me and changed THOUSANDS of lives from Iowa to Arizona to Chicago to Texas- there will never be another beautiful soul like Coach Ken 💔🙏🏽 pic.twitter.com/A4qTaOG8BJ

Burmeister, a graduate of St. Mary’s, first made a name for himself as an assistant on Lute Olson’s staffs at Iowa and Arizona.

So sorry to about the passing of Ken Burmeister, one of college basketball’s best characters. Excellent head coach & Hall of Fame recruiter for Lute Olson, ⁦@IowaHoops⁩ & @APlayersProgram, also⁩. RIP, Kenny B. pic.twitter.com/pYN9aV5LFp

Burmeister’s tenure at UIW was highlighted by upset victories on the road at Princeton and Nebraska in 2014-15 and at St. John’s in 2015-16.

R.I.P Coach Burm. Thank you for giving me the opportunity to continue my basketball career. I’m truly glad we made some good history together 🙏🏽🙏🏽🙏🏽 Coach in peace ❤️ pic.twitter.com/x2cixIwHCA

Burmeister is survived by his wife, Brenda, and two children, Amanda and Sam. A student-athlete at UIW, Sam Burmeister played in 100 games and made 56 starts for his father between 2013 and 2018.

Note – Burmeister coached Division III Trinity in 1998-99. Incarnate Word played in Division II from his arrival in 2006 through the 2012-13 season. Burmeister led UIW into a four-year Division I transition starting in 2013.

x – Indicates record adjustments because of NCAA violations in both 2006-07 and 2012-13. Actual records are in parentheses.