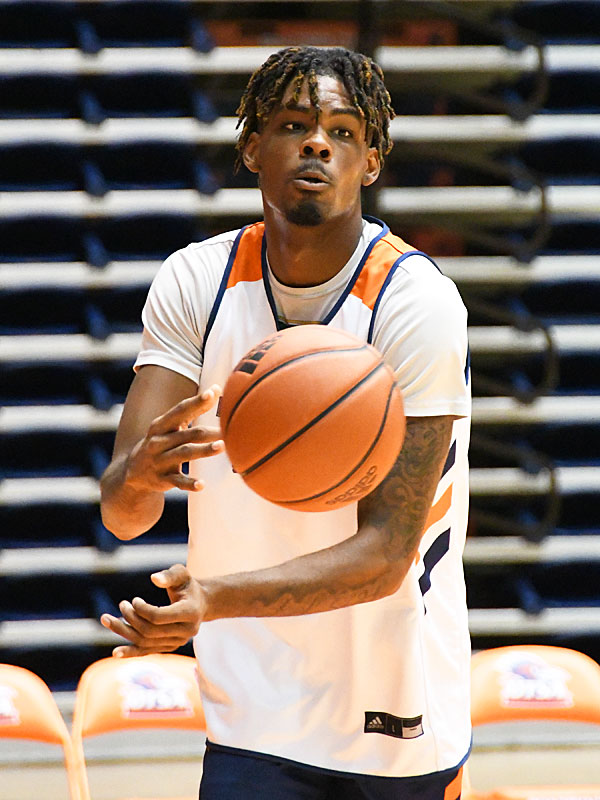 Josh Farmer, a 6-foot-9 freshman, has had a solid training camp leading into tonight’s season opener against Trinity University. – Photo by Joe Alexander

As UTSA preseason basketball practices played out over the past month, I had to make sure that I talked to freshman Josh Farmer before it was all over.

The lanky forward caught my eye early with:

A) A resolve to mix it up in the paint with more physical players;

B) An advanced ability to create both his own shot and shots for others, and;

C) A certain confidence that he belongs in the playing rotation even as a young man who is only a few months out of high school.

Standing 6-feet-9 and weighing 197 pounds, it seems that all he needs is a few years to get stronger, and the Roadrunners could really have something special.

Farmer said recently that he has already started on a rigorous weight-training regimen.

“I’ve been in the weight room,” he said in an interview last Friday. “I (was) in the weight room four times this week. Four times last week. And I’ve been eating, and drinking water. That’s it. My metabolism is fast. I might not think I’m eating a lot, but I am.”

With UTSA opening tonight against Division III Trinity and playing again Friday on the road at Division I power Oklahoma, the former standout from Houston Sharpstown is expected to play off the bench for the Roadrunners.

Just how much, is not certain. What is certain is that he has caught the attention of the UTSA coaching staff.

“It’s going to be fun watching him,” sixth-year coach Steve Henson said. “There’s not a question of if (he can play). I mean, he’s so talented, and he’s very coachable. Got a great basketball IQ.

“You tell him something once and he’s got it. Great attitude. He’s going to be a big contributor.”

Henson said last week that coaches are working to accelerate his development.

“We need to speed up that process,” Henson said. “We’ve talked about that with our coaches, with some of our players, as well. They know it. They can see it. Anybody walks in the gym, whether you know anything about basketball or not, you can see his talent.

“We just got to speed that process up and see how he can impact games. You know, right now, he’s behind some other guys. But he’s also got a ton of upside.”

Farmer’s practice battles with burly senior Cedric Alley Jr. have been entertaining. On one end of the floor, Alley will go into his bump-and-grind routine, and then forcefully will spin inside.

On the other end, Farmer isn’t shy about using his dribble handle to get around traffic in the paint. Then, with his length, he creates just enough space to pass. Or, at times, enough space to shoot a bank shot.

A brazen move, for a freshman. Like Keaton Wallace or Jhivvan Jackson four years ago, Farmer is not shy about anything that happens between the lines on a basketball court.

Almost matter of factly, he said he expected to play as a freshman when he arrived on campus. He said he had a feeling he would based on his conversations with the coaches and with the trust he had in his ability to rebound and run the floor.

Nevertheless, he still had to prove himself, and he did.

So, how does Josh Farmer grade himself on his performance in camp?

“It kind of took me time to get used to the pace of the game,” he said. “When I got used to it, it kind of converted to me attacking (on offense) and on defense being able to see everybody … It just takes time to adapt to everything.

“But I feel good about it, overall.”