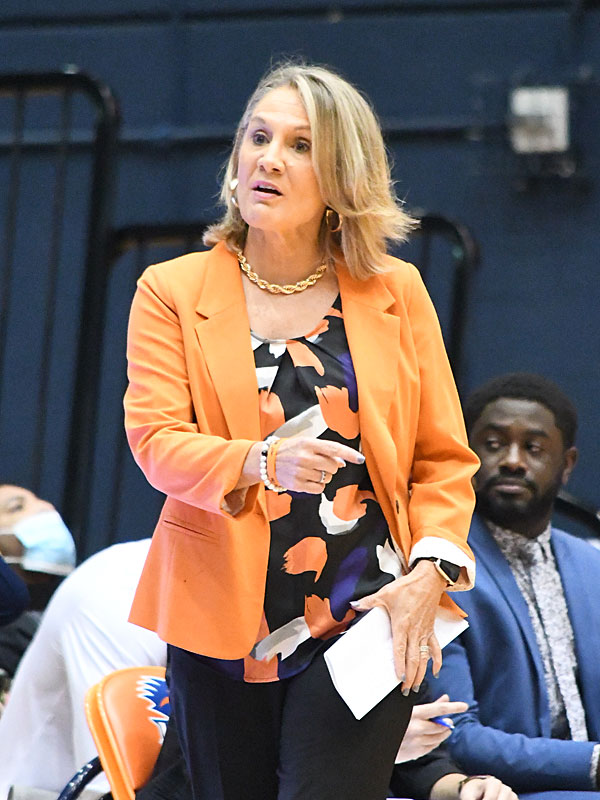 The UTSA Roadrunners pushed the pace and tried to run with the Stephen F. Austin Ladyjacks. The Roadrunners played with a determined effort in Karen Aston’s first game as coach.

But while they showed up with the will to win, they couldn’t get that done. Not against an SFA team that showed off a talented group of players capable of challenging for a second straight trip to the NCAA tournament.

The Ladyjacks bolted to an early lead, forced 33 turnovers and cruised to a 77-50 victory Tuesday night in the season-opener for both teams at the UTSA Convocation Center.

“I thought we started the game off well and then a couple of things didn’t go our way,” Aston said. “So we started to get a little antsy and got passive. And they kind of smelled the blood a little bit in the first half.”

Aston said the Roadrunners need to learn how to play every possession.

“I thought we showed signs of some good things and then we’d turn back around and foul,” she said. “Or … not get back on defense. I think there’s a play-to-play aspect that this team just doesn’t understand right now that we’ll get to.” 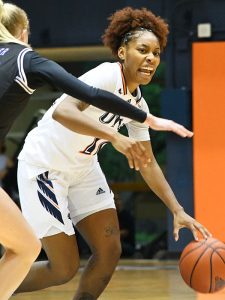 Lapraisjah Johnson led the Roadrunners in scoring with 13 points. She also had four rebounds. – Photo by Joe Alexander

Despite eight points and three rebounds in the quarter from Lapraisjah Johnson and a determined effort from Queen Ulabo and others, the Roadrunners couldn’t slow down the Ladyjacks. UTSA, trailing by 16 at the half, cut the lead to 13 early in the period but failed to get any closer. Tasharian Robinson nailed a three to ignite a 15-7 run for SFA.

Playing better at the outset of the quarter, the Roadrunners pulled to within 10 when Jadyn Pimentel knocked down a 3 from the top of the circle. From there, the offense went a little bit haywire. UTSA went 0 for 6 from the field in a lull that stretched to the halftime buzzer. The Roadrunners were called for a shot-clock violation on their final possession, their 20th turnover of the game to that point. Stephanie Visscher had four points and an assist for the Ladyjacks in the period.

Tasharian Robinson hit two 3-pointers in a furious 13-3 run to close out the first quarter for the Ladyjacks. SFA sank five of six from the field during the streak. UTSA played good defense early, holding SFA to 3 of 11 shooting at one point. But the Roadrunners committed 13 turnovers and couldn’t get much going offensively.

UTSA entered the opener under new leadership in coach Karen Aston, a former coach at Texas.
The Roadrunners are riding a streak of six straight seasons with losing records, including 2-18 last year.

UTSA also came in on a streak of 12 seasons without a trip to the NCAA tournament. In UTSA’s last NCAA appearance, in 2009, the team was 24-9 under coach Rae Rippetoe-Blair.

SFA played its opener coming off a 24-3 season last year and a trip to the NCAAs.

In the tournament, the Ladyjacks played in San Antonio at Greehey Arena and lost a heartbreaker, falling 54-52 in overtime to fifth-seeded Georgia Tech. Most of the players from last year’s team are back to try and make another run.

A longtime member of the Southland Conference, SFA has a new home in the Western Athletic Conference.