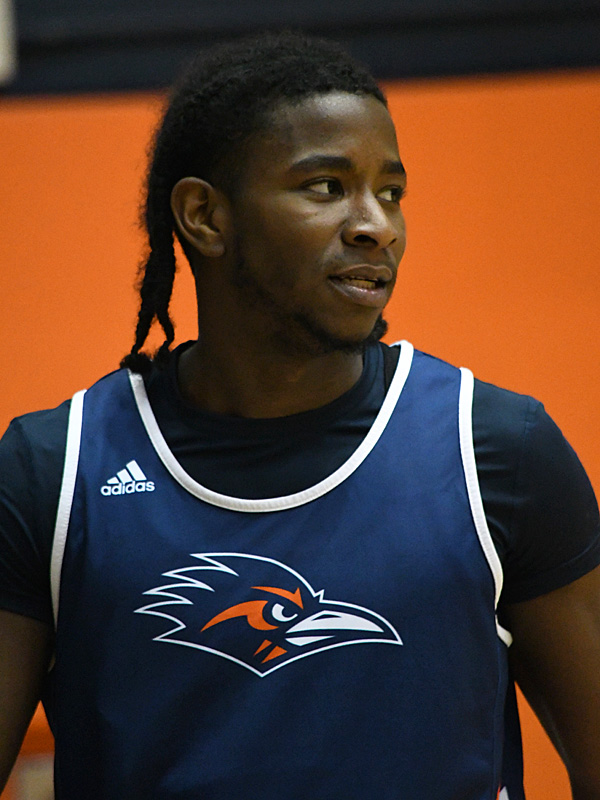 UTSA’s John Buggs III, a redshirt sophomore from Homer, La., is expected to start at shooting guard Wednesday night in an exhibition game against the Schreiner Mountaineers. – Photo by Joe Alexander

UTSA guard John Buggs III would like to say that he brings the same athleticism and burst to the basketball court that he did when he was a high school senior in Homer, La. But that would not actually be the case.

After five surgeries, including major reconstructions on each knee, Buggs relies more on guile and finesse than all-out assaults on the rim.

“The high school me, you’d see me dunking on people, that kind of stuff,” he said. “I kind of became an old head (since then). A lot of jump shots (now). A lot of floaters. Not trying to get to the rim. Using a lot of pace. Not trying to blow by people. Kind of more of a mind game now.”

Whatever the case, the “old head,” now listed as a UTSA redshirt sophomore, has proven himself as more than capable of playing for the Roadrunners.

From the start of the summer, through the early fall semester workouts and into the grind of more intense preseason practices, Buggs and backcourt mate Japhet Medor have supplied a steadying presence to a program looking to bounce back from a tough year.

Accordingly, both are expected to start Wednesday night in an exhibition home game against the Schreiner University Mountaineers.

Counting a closed scrimmage in Belton against UT Arlington a few weeks ago, it is UTSA’s second contest of the preseason against another team and its first in front of the fans. The Roadrunners will host Trinity University in the season opener on Monday night.

Medor, a senior, will play the point against Schreiner. The 6-foot-2 Buggs will be stationed at the two guard, with Erik Czumbel, on the wing, at the three. Isaiah Addo-Ankrah will open at the four, while Germany patrols the paint at center.

Earlier this week, the Roadrunners gathered to meet, to discuss individual roles and various topics. Head Coach Steve Henson made one observation that stuck with Germany, the team’s leading scorer from a year ago.

Henson told the players that the newcomers “really helped the (returning players) mature, if that makes sense,” said Germany, who added that he agrees with the sentiment.

“You look at Buggs and Japhet and the way they approach the game, and even Isaiah, they helped Lamin (Sabally) and Josh (Farmer) — even me — mature to the point where we’re just locked in. All in. Completely bought in to this team,” the 6-foot-11 Oklahoman said.

After experiencing the negative vibes of last year’s 10-22 disappointment, Germany said Buggs and Medor brought in an intangible — a positive spirit. He said the feeling spread to the rest of the players on the roster, and even to the coaching staff. “It just clicked really well,” he said.

“Their attitude and personality just made things so much better,” Germany said. “You look forward to seeing them every day.”

Henson said he agrees that the two guards, both of them four years removed from high school, have made a difference in the team’s preparation.

“I don’t think there’s any question,” the coach said. “Just two terrific teammates. Just their nature. I don’t think they did anything consciously to make that happen. It’s just who they are. Both of them are a little older. They’ve been around awhile.”

Medor, who grew up in South Florida, attended prep school for a year and then spent three seasons at the junior college level.

He’s a point guard with speed who loves to distribute. Medor, at 6 feet, can spot up and shoot from the outside, and he does dunk with surprising authority. But his primary function in Henson’s system will be to create for others.

Buggs, from Homer, in northwest Louisiana, also experienced a year of prep school. He then spent one season at the University of Massachusetts in 2019-20, followed by two more at Hill College in central Texas, about 35 miles north of Waco.

At UMass, Buggs played in four games before he blew out his right knee. He never played again for the NCAA Division I Minutemen. One year later, at Hill, in Hillsboro, Buggs injured his left knee in the season opener.

Once a dynamic 6-foot-2 guard who could electrify with his athleticism, he was relegated to another year of rehabilitation. Last season, Buggs bounced back by averaging 15.2 points per game. Notably, he hit 89 of 188 from 3-point range, good for 47.3 percent.

Buggs said Tuesday afternoon that it feels good to be back in Division I.

“It’s really just a long time coming,” he said. “I mean, it’s all the same. I feel like I been doing the same thing since before Division I. When I was in prep school (in Connecticut, in 2018-19), I pretty much played along with a Division I team. So it’s pretty much the same thing. It all translates.

“I’m just excited to be back on this level. It’s more about proving to myself that I could do it. I feel like I was (written) off with the back-to-back injuries. (With) Covid. All of that. So, it’s just kind of surreal. It’s a moment I’ve been waiting for, for a very long time.

“I won’t waste the opportunity. I appreciate it so much. Because, I know a million people would gladly be in my shoes.”

From another angle, this preseason marks the first in years for Buggs in which he feels as if he has been healthy enough to prepare himself properly.

“I had five surgeries in all, on my knees,” he said. “I had one before my first major one. Then after that I just had a lot of them, back-to-back. So it was kind of like two years of straight rehabbing. Watching basketball. Not being able to be on the court.

“So I’m really excited because, this year was like my first offseason to actually train and get up shots and put in work. Because the last two summers, going into the season, like at Hill, I got cleared in October. And the season started in November.

“I really didn’t have (any) summers to get any workouts in. So I’m really excited to see how far I’ve come along.”

Buggs has enjoyed some good moments in the last 30-something days of practices. When he finds a rhythm, his teammates sense that everything he shoots is going to find the bottom of the net. For instance, as Buggs unleashes a jumper from long distance, players often call it good as the ball leaves his hand.

In many instances, they have been correct.

Also, the chemistry between Buggs and Medor has been noticeable. Medor is perhaps the first pass-first point guard that UTSA has had since Giovanni De Nicolao. With his quickness, he can get into the paint, and with his awareness, he can get the ball to shooters — with touch.

Opposing teams will need to pay attention first to Medor, to stop his penetration, but also to Buggs, who apparently has been given something akin to a green light. Likely, he and Addo-Ankrah are the most dangerous three-point threats on the team.

Buggs said it’s been an easy transition for him to make, coming in from his two years at Hillsboro.

“Maybe my (UTSA) coaches want me to shoot a little more,” he said. “But, it’s been easy because the team, they’re all on board with what the coaches are saying. If the coaches say, ‘Buggs, you should have shot that shot,’ then, you have 9 or 10 guys saying, ‘Shoot the ball.’

“There’s no second-guessing. There’s no questioning, so I really appreciate my teammates for that. Especially playing with Japhet Medor. He makes it so easy. You get so many easy shots. It’s been really easy. Really simple.”

UTSA hosts Division III Trinity University on Monday at 7 p.m. The Roadrunners will play next on Nov. 11 at Texas A&M-Corpus Christi. The postseason for the Islanders last year included a Southland Conference title and a trip to the NCAA tournament.

UTSA practice highlights: Japhet Medor spins down the baseline and passes to John Buggs III in the corner for a wide-open three. https://t.co/hyCDEtJChY pic.twitter.com/rlWAbLaaVj