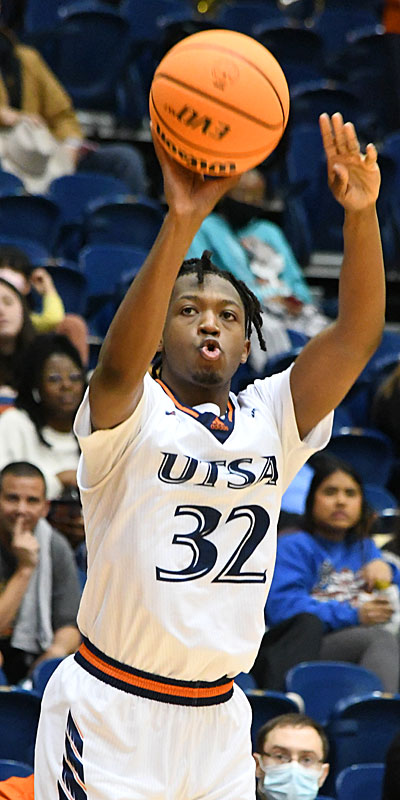 Former walk-on Isaiah Addo-Ankrah emerged as UTSA’s best 3-point shooter last season. He hit 42 percent from behind the arc and was later awarded a scholarship. – Photo by Joe Alexander

Tonight, for the first time, UTSA’s Isaiah Addo-Ankrah will take the court in front of fans as an NCAA Division I scholarship basketball player.

The landmark moment in the former walk-on’s career will arrive as the UTSA men’s and women’s teams host Rowdy Jam, a tip-off event to celebrate the start of the season. Rowdy Jam will run from 7 – 9 p.m. at the Rec Center.

Addo-Ankrah said in an interview last week that he is taking seriously his ascension in roster status, though not to the extent that he feels any sort of added pressure or responsibility.

“No,” he said. “I still feel like I’m that walk-on with that chip on my shoulder even though I got the scholarship. I don’t feel like I got to do more. I feel like I just need to keep working.”

With Rowdy Jam, the basketball programs will unveil their teams to the fans. Admission is free for all students who bring their student ID. Last season, the UTSA men (10-22) and women (7-23) suffered through some tough times.

Addo-Ankrah said he thinks the Roadrunners’ men will be “way better” than last year.

“I feel like we’re more connected,” he said. “Still got a long ways to go (in) being a little bit tougher. But, a way better team than last year. Team-wise, we have all the right pieces. Everyone gets together and there’s no, like, drama. Or anything like that.”

During last season’s drama, Addo-Ankrah emerged as one of the bright spots. He started to show during conference play that he could contribute in a meaningful way.

Down the stretch, the former standout at Houston Second Baptist High School became the Roadrunners’ most reliable threat from 3-point distance.

As a result, he was told during the offseason that he would be elevated to scholarship status. He said in an interview on Oct. 20 that it was an emotional moment for him.

He was home, in his apartment making breakfast with his mother, when his cell phone buzzed. Coach Steve Henson calling with news that he would no longer need to pay his own way to attend UTSA.

Addo-Ankrah, a 2019 graduate of Houston Second Baptist High School, had spent the past three years wondering if the scholarship would ever come. Likely, he also had questions at times as to whether he could make it to the next practice.

In his first season out of high school, Addo-Ankrah attended the University of Houston. First, as a walk-on tryout for the men’s team. Later, as a practice player for the UH women’s squad.

After enrolling at UTSA in 2020, he felt a sense of optimism in catching on with Henson’s Roadrunners. But at the same time, there were never any guarantees. Addo-Ankrah played only six games in mop-up duty as a freshman.

“My freshman year (at UTSA)?” he asked. “I’d say it was hard. Because I was away from home, and there was Covid and you’re isolated and you’re not really getting in (to the program), but you got to know what to do.

“You have to try to figure everything out. You’re living alone. Then you got to play basketball, and I was skinny.”

The Roadrunners weren’t a particularly physical team in the 2020-21 season. But they did have a couple of players who weighed more than 220 pounds, including one at 240. At the time, Addo-Ankrah tipped the scales at 180.

“I remember my first day at practice, (former UTSA forward) Luka Barisic hit me in the stomach,” he recalled. “I said, ‘Aw man, I don’t know if I’m built for this.’ ”

To his surprise, Addo-Ankrah was built to last. Though he played sparingly as a freshman and started his sophomore year in an equally limited role, things started to change after the Christmas break.

Unfortunately for the team, players started to come down with Covid on seemingly an every-other-week basis.

Later, Cedrick Alley was ruled academically ineligible. Dhieu Deing and Jordan Ivy-Curry left the team team, though Deing returned to finish out the year. Aleu Aleu injured a knee and was lost for the season.

It was a mess, and leading into a road trip at UTEP, the Roadrunners took the floor with only six scholarship players. Addo-Ankrah stepped into the fray and knocked down three, 3-point shots off the bench.

For the season, he knocked down 32 of 76 treys, leading the team with a 42.1 shooting percentage from behind the arc.

It was a bittersweet stretch for Addo-Ankrah, who was finally getting to play consistently at the same time that the program was crumbling toward a 10-22 finish. This season, Addo-Ankrah feels much better about the team’s prospects.

“I feel like we’re more connected,” he said. “Still got a long ways to go (in) being a little bit tougher. But, a way better team than last year. Team-wise, we have all the right pieces. Everyone gets together and there’s no, like, drama. Or anything like that.”

Asked what he meant by being “more connected,” Addo-Ankrah offered a revealing description of last year’s experience.

“I feel like I got brothers now,” he said. “Like, last year I’d be coming in and, like, I didn’t know who I could talk to. Anyone on the team (this season), I can have a conversation with. That I can hang out with. Things like that.

“Not even (just) on the court. Off the court. I know that they got my back, and they care for me.”

Last year, for the season, Addo-Ankrah played in 21 of 32 games. The 6-foot-7, 200-pounder averaged 5.6 points and 1.7 rebounds in a little more than 16 minutes. This season, the Roadrunners likely are looking to him for additional scoring punch.

During fall practices, he’s been part of an intriguing small-ball unit, with four perimeter players consisting of 5-foot-11 Japhet Medor, 6-2 John Buggs, 6-3 Erik Czumbel and himself, with 6-11 Jacob Germany in the post.

Most often, Medor is the point guard in that lineup, with Buggs at shooting guard, Czumbel at wing forward and Addo-Ankrah at power forward.

“All three (of the guards) can play-make,” Addo-Ankrah said. “EZ can play the one and take Japhet off ball (at times). He’s calm. You know what he brings to the table. Like, he’s going to go hard every time.

“And you know Buggs can shoot it. If it gets down in the shot clock, he can get a bucket, and so can Japhet. So can Jacob. So, (coach) likes that lineup.”

If the Roadrunners play with that lineup to a great extent, Addo-Ankrah knows he will need to focus on rebounding a little more than usual.

“You got to be tough,” he said. “You got to box out. (Assistant) coach (Adam) Hood challenged me to get more rebounds. Because, normally, I’ve been playing guard, so I don’t crash as much. (He says) ‘every time you see a ball, go attack it.’ That’s the only thing I got to look at. I don’t mind it at all.”

At the same time, the Roadrunners will need to see Addo-Ankrah at his best on the offensive end, and he knows it.

In an effort to remedy offensive woes from last year, coaches have challenged each player on the roster to hit 10,000 three-point shots in two different segments of the offseason.

The first segment ran from June to August, Addo-Ankrah said. The next one started in September and is scheduled to run for the next few days, through the end of October.

Addo-Ankrah said he made 17,000 treys by the end of August. He said he’s knocked down another 13,000 this fall, and he said those were at different times outside of scheduled team practices.

“And that’s just threes,” he said. “I still shoot mid-range (shots). That’s another thing about this year, about the brotherhood. I got a lot more people to shoot with (this year). People to talk to. To work out with.

“Sometimes we’ll play (one on one). I think that’s going to help us out a lot. Coach putting that shooting challenge in, to get in the gym more. He wants us to have something to shoot for.”

Isaiah Addo-Ankrah with the quick-release three, unleashed during a Thursday afternoon practice at UTSA. https://t.co/hyCDEtJChY pic.twitter.com/r7UsRvHfNF