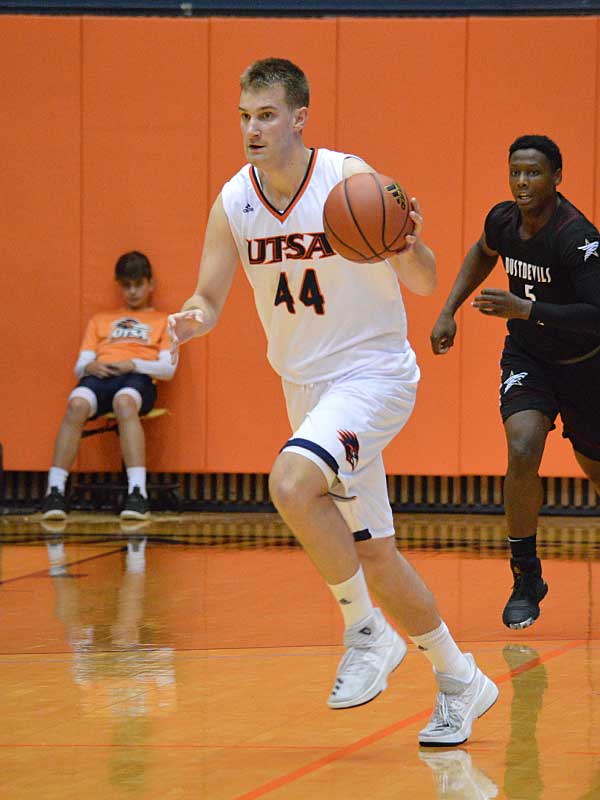 If you execute a Google search for the city of Osijek, Croatia, you may come across a video showing aerial views of a picturesque community built on the river Drava, which cuts a wide swath through the town and meanders out across a marshy terrain in the distance.

Within Osijek itself, a paved promenade runs adjacent to the river. Bells ring out from a few quaint, spire-topped churches, which stand tall above clusters of four- and five-story buildings. This is the hometown of promising UTSA basketball newcomer Luka Barisic.

In Texas terms, Osijek is about the size of New Braunfels. Its population is pegged at anywhere from 84,000 to 88,000, according to various websites. But if you think Barisic is homesick or awestruck about living in a metropolitan area in South Texas, so far away from his European roots, think again.

The 21-year-old junior forward is a young man who has been on his own, away from home, for the past six years. In high school, Barisic attended a private academy in Zagreb, Croatia. For the past two years, he has lived and played junior college basketball in Freeport, Ill., about a two-hour drive to Chicago.

“My home town (of Osijek) is probably less than 100,000 (population),” Barisic said. “When you see Chicago, it’s probably like all of Croatia, because it’s like, four million people. It’s a big city. (It) gives you a good view of where you are, that you are in the U.S.” 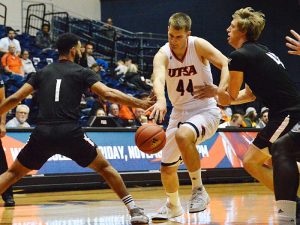 UTSA forward Luka Barisic charges through traffic on the dribble in an exhibition against Texas A&M International. – photo by Joe Alexander

In July, he moved to San Antonio and started classes at UTSA. On Tuesday night, he likely will get a starting nod at forward in the Roadrunners’ season opener at Oklahoma. For Barisic, a former small-town kid from central Europe, it will be a major moment in his life.

“I’m very excited,” he said. “My team, we are like, ready and waiting for Tuesday.”

“He’s really a good player,” said Danko Barisic, a 2008 St. Mary’s graduate and a Boerne resident. “He’s very humble, but he’s also a confident kid. Anyone who comes in contact with him know he is wise beyond his years.

“He’s been living away from home since he was 15 years old, when he started playing for a basketball academy back home. He’s self-sufficient and motivated. I think he’s going to do well.”

In the past year, UTSA coach Steve Henson reeled in a top-notch recruiting class featuring four-star center Jacob Germany, Barisic and others. If Barisic gets the starting nod against OU, as expected, he will be the only one of the incoming class to do so.

Henson said UTSA will miss forward Nick Allen, a four-year player for the Roadrunners who has played out his eligibility. But the coach hopes that newcomers such as Barisic, Germany and Phoenix Ford can step in to fill the void.

Barisic, who carries 240 pounds on a 6-foot-10 frame, has a unique skill-set that attracted interest from several NCAA Division I programs.

“We knew he was a good passer in the post,” Henson said. “(But) he passes it better from the perimeter than we anticipated. (He’s) a highly-skilled guy. He’s not the most athletic guy. If we’re going to compare him to Nick (Allen), he’s not as quick. He’s not as defensive minded.

“But, certainly, we hope we can offset that with just his high skill level. Pretty high IQ as well. So, he’s going to have a huge role for us.”

Barisic developed an all-around game years ago in competition against older players, his brother said.

After Henson saw Luka Barisic play in the national junior college tournament in 2018, a scholarship offer was tendered.

But the family waited, and other phone calls started to come in. They came from Drake, the University of San Diego, Stephen F. Austin and Southern Illinois, the player’s older brother said. Barisic also took an unofficial visit to Minnesota, a power program in the Big Ten.

He eventually signed with UTSA in the spring this year.

“I was talking to a lot of coaches, to a lot of schools, some Big Ten schools,” Luka Barisic said. “But I was not impressed with some schools. What coach Henson presented was very good for me. So, I decided to come here.

“I think it’s a great program that (can) develop me, to play and enjoy the game of basketball.”

Henson said he figured that with the ball player’s older brother living in the area, UTSA would have a good chance to sign him. Barisic didn’t discount the idea that having family within 30 miles of campus was a positive.

“Of course, that was some plus,” the ball player said. “But that wasn’t something that was the most important for my decision.”

Barisic has played at a high level for the past two years. In the summer of 2018, he made the under-18 Croatia National Team. In 2018-19, he averaged 17.9 points and 6.8 rebounds at Highland (Ill.) Community College and made third-team NJCAA All-American.

He said he liked the feel of the UTSA program when he came to visit. He said it felt sort of like home.

“One of the most important things about sport in general is chemistry,” Barisic said. “And, right now, I can tell you that we got great chemistry in the locker room. We’re like a big family. I think that is very important to us, and that it will bring good results.”