Oklahoma took control early in the second half and beat UTSA 85-67 on Tuesday night in Norman, Okla., in the Roadrunners’ season opener.

UTSA plays its next three games on the road Friday, Saturday and Sunday in the Sunshine Slam in Kissimme, Fla. 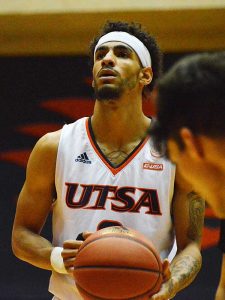 Jhivvan Jackson, shown in UTSA’s exhibition game on Oct. 30, led the Roadrunners with 24 points and 13 rebounds in their season opener against Oklahoma on Tuesday. – photo by Joe Alexander

The first half was played evenly with both teams leading by as many as seven points. UTSA and OU were tied 36-36 at halftime. UTSA’s Keaton Wallace had 11 points in the half and Jhivvan Jackson had nine points and 11 rebounds but also three fouls.

Harmon and Austin Reaves led OU with 23 points each. The Sooners shot 57.1 from the field in the second half and 47.7 percent for the game.

Jackson led UTSA with 24 points and a career-high 13 rebounds. Jackson shot 9-of-25 from the field including 1-of-10 on 3-pointers.

Wallace fouled out and finished the game with 17 points and nine rebounds. He shot 6-of-16 from the field including 2-of-8 on 3-pointers.