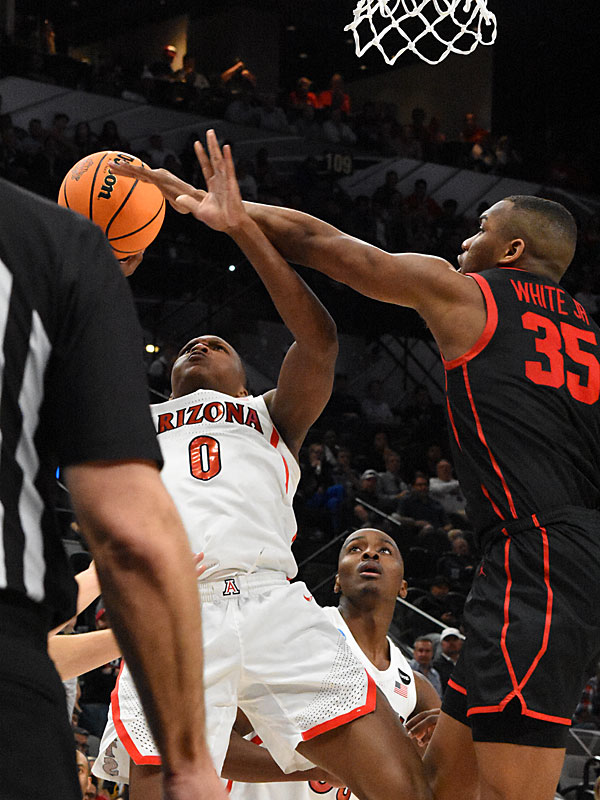 Houston’s Fabian White Jr. defends against Arizona’s Bennedict Mathurin in the Sweet 16. White and the Cougars smothered the Wildcats 72-60. With the victory, Houston advanced to face Villanova today in the Elite Eight. – Photo by Joe Alexander

When the Houston Cougars emerge from the dressing room today, their reputation as a basketball team built on defense will precede even the first steps they will take in the layup line.

It’s a reputation known by everyone preparing to watch the NCAA Elite Eight matchup on television. By everyone on the streets scrambling to get a ticket for the game at the AT&T Center. 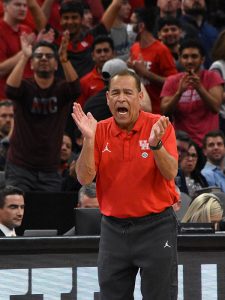 Houston coach Kelvin Sampson hopes to lead his team to a victory today and a second straight trip to the Final Four. – Photo by Joe Alexander

And, perhaps most importantly, by their opponent — the Villanova Wildcats.

Heck, any fan who has ever followed teams coached by Kelvin Sampson over the past 25 years knows what the Cougars are planning to do today once the ball is tossed in the air for the opening tip.

From a team concept, each player in a Houston uniform will know the plan tailored specifically to stopping Collin Gillespie and the Wildcats.

Each will know the nuances in the offensive repertoire of Gillespie and everyone else in the Villanova rotation.

Moreover, each Houston player will expend effort on the defensive end as if it’s the last thing they do.

That is essentially what happened Thursday night when the Cougars dismantled the Arizona Wildcats in the Sweet 16.

Arizona, one of the slickest and most skilled offensive teams in the nation, at first was rattled.

Then it was completely shut down. In a 72-60 loss that ended their season, the Wildcats were held some 24 points below their season scoring average. 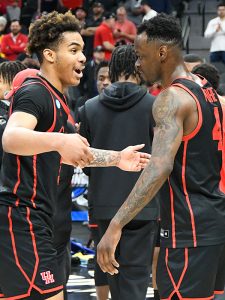 As a USA Today columnist noted, “Houston’s physicality on every single play made things so difficult that Arizona quite literally didn’t know what to do.”

Since physicality is such an interesting word, sometimes conjuring images of an overly aggressive style of play, Houston forward Fabian White Jr. was asked Friday about the specifics of the description.

White had no problem with it.

“That’s just how we play,” White said. “We play physical. In practice, we barely call fouls. We dive on the floor, barely lose the ball in practice.

“That’s just our culture. We want to play physical and not make the game easy for the opponent. Yeah, I agree with that statement.

“We want to play physical as much as possible.”

As both teams’ players and coaches met with the media on Friday afternoon, Villanova coach Jay Wright summed up the challenge that his Wildcats will face, with a berth in the Final Four hanging in the balance.

“We know what an outstanding team we’re playing, (one) that’s got just great experience,” Wright said. “They were in the Final Four last year.

“You can tell by the way they play in these games, they are a very comfortable in this tournament setting. They’re very disciplined.”

In some ways, the Cougars’ commitment to defense overshadows some of the other elements of their success. 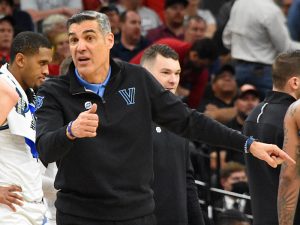 “I feel like they are underrated as an offensive team,” Wright said. “Everybody knows what a great defensive team they are, but I think they really find matchups to their advantage and execute intelligently, offensively, and part of their scheme is setting themselves up for offensive rebounds …

“We know we’ve got a lot of work ahead of us. We worked out this morning, and we still have work to do to get ready for the game tomorrow.”

Villanova, the No. 2 seed in the NCAA South region, has played a pretty salty brand of hoops in its own right over the past few weeks.

Employing a walk-it-up pace most of the time, the Wildcats have registered victories over Delaware, Ohio State and Michigan, holding opponents to an average of 59 points per game.

Even with Villanova’s play of late, not to mention its history as a two-time NCAA champion under Wright, it’s intriguing to see that oddsmakers are favoring Houston to win today.

The reason? Likely, it stems from the Cougars’ relentless effort on the defensive end of the floor.

“It’s just really impressive,” Wright said. “Every coach tries to get their team to play that way. You wouldn’t talk to one coach who would say, ‘You know, I don’t care if my guys play hard defensively. I don’t care if they play every possession like it’s the last possession of their life.’

“We all try to get our guys to do that. Kelvin gets his guys to do it .. They literally play every defensive possession like it’s the last possession of the game.” 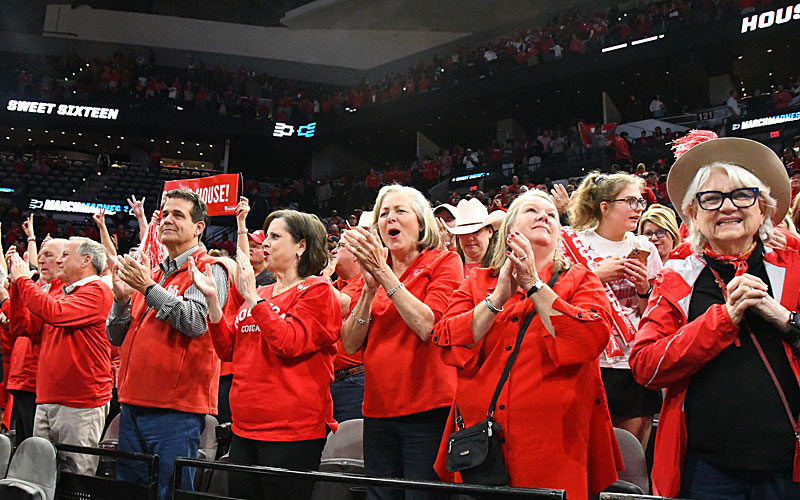 The Houston Cougars’ hope their fans turn out in force today in San Antonio. Cougars’ fans made a difference in Thursday’s victory over Arizona.. – Photo by Joe Alexander