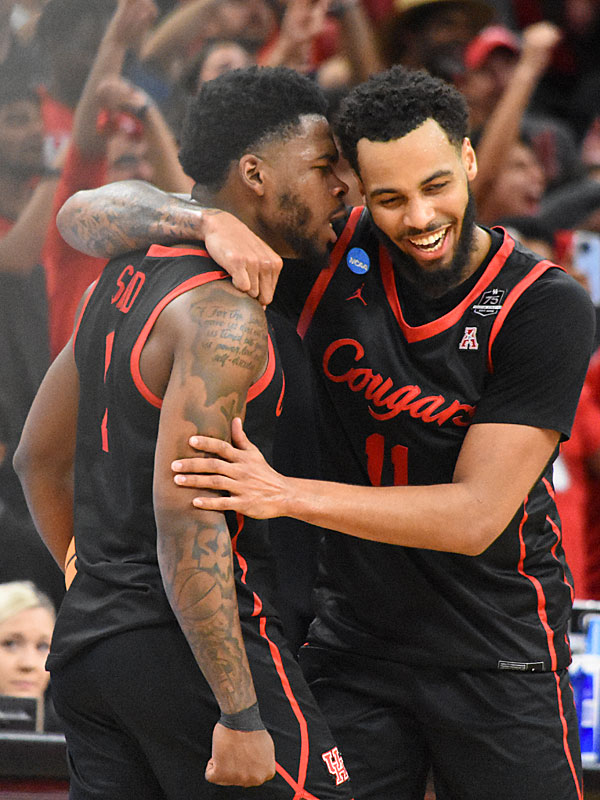 Houston guards Jamal Shead (left) and Kyler Edwards have a moment after the fifth-seeded Cougars knocked off the top-seeded Arizona Wildcats 72-60 in the Sweet 16 Thursday night at the AT&T Center. – Photo by Joe Alexander

When Houston Cougars guard Kyler Edwards buried a three-point shot from the corner with a little less than eight minutes remaining Thursday night, he turned around and shouted at his teammates on the bench.

His teammates waved their fists and shouted right back.

Obviously, both Edwards and the Houston bench sensed that something big might be happening. They were right. Led by Edwards, Jamal Shead and others, the fifth-seeded Cougars upset the top-seeded Arizona Wildcats 72-60 at the AT&T Center in the NCAA Sweet 16. 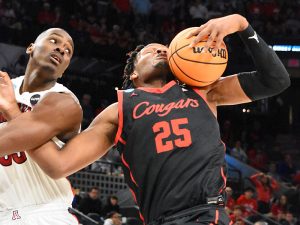 Houston center Josh Carlton fights for the ball Thursday night at the AT&T Center. Carlton played against bigger players and finished with 10 points and seven rebounds. He was five for six from the field. – Photo by Joe Alexander

As a result, the Cougars will move on to play the Villanova Wildcats Saturday in the Elite Eight round of the tournament for the South regional title. The winner will advance to the Final Four next week in New Orleans.

“Our team, we’re a tough bunch,” Houston coach Kelvin Sampson said. “We’ve gotten a lot better as the season’s (gone) on. All the credit goes to these kids. You know, I can do whatever I want (but) the coach doesn’t win games. The players do.

“I’m really proud of this bunch. They bought into the game plan, and they’re not afraid of anybody. Whether it’s UAB or Illinois or Arizona. Our next game with Villanova, we’ll just move on to that one and do the best we can.”

Shead scored 21 points and Edwards had 19 as the Cougars (32-5) reached the Elite Eight round of the tournament for the second year in a row. 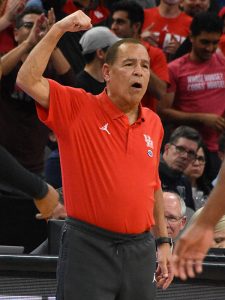 Coach Kelvin Sampson led the Houston Cougars to the Final Four last year. This year, the Cougars are now one win away from making a return trip. They’ll play Villanova in the Elite Eight round for the NCAA South regional title on Saturday at the AT&T Center. – Photo by Joe Alexander

For Shead and Edwards and the Cougars, playing in an NBA arena in a tournament game against an elite opponent like Arizona was a big. A loud and boisterous crowd that filled most of the seats spurred them on.

“We liked how the crowd showed up today,” Edwards said. “The crowd brought all the energy today. They really helped us.”

Added Shead: “The crowd was electric.”

Shead and Edwards helped create some of the electricity. A sophomore from Manor, Shead had 21 points, six assists and four rebounds. Edwards, a senior from Arlington, had 19 points. He hit 6 of 13 shots from the field, including 5 of 9 from three.

Dalen Terry paced the Wildcats with 17 points and six rebounds. Bennedict Mathurin had 15 but he was 4 of 14 from the field. Seven-foot-one Christian Koloko had 10 points, four rebounds and two blocks. 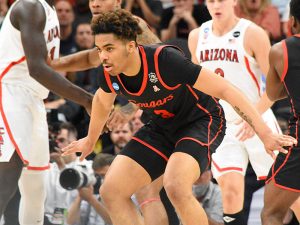 Freshman Ramon Walker Jr. played 26 minutes off the bench against top-seeded Arizona. He held his own with five points and three rebounds. – Photo by Joe Alexander

The Wildcats entered the Sweet 16 on a seven-game winning streak. In their last 18 games coming in to the meeting against the Cougars, they had gone 17-1. In the end, they finished 33-4.

In Game Two of an NCAA Sweet 16 doubleheader at the AT&T Center, the Houston Cougars on Thursday night used seven players in the first half and all played a role in building a 34-28 lead on the Arizona Wildcats. 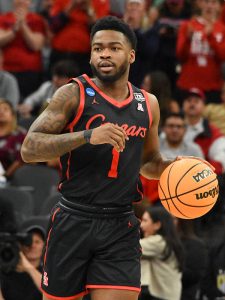 Kyler Edwards, a senior from Arlington, was perhaps the key player, holding Arizona star Bennedict Mathurin to five points and one field goal. Mathurin didn’t have a field goal until 1:33 left in the half.

Other standouts included Josh Carlton and Jamal Shead with six points apiece and Ramon Walker with five. Reggie Cheney had four. Both Walker and Cheney came off the bench to give the Cougars a lift.

Defensively, the Cougars were excellent. The Wildcats, one of the best offensive teams in the nation, were limited to 7 of 25 shooting from the field. Dalen Terry had eight points and Christian Koloko seven.

Highlights for the Cougars were plenty. Fabian White opened by hitting two straight shots from the field.

Carlton played with flair and finesse on the inside, snaking around taller and broader defenders to hit shots. Shead authored a key sequence with about six minutes left.

As Koloko fired a pass out from the post, Shead stole it near half court and sped the rest of the way for a layup. The play brought the Houston fans to their feet. 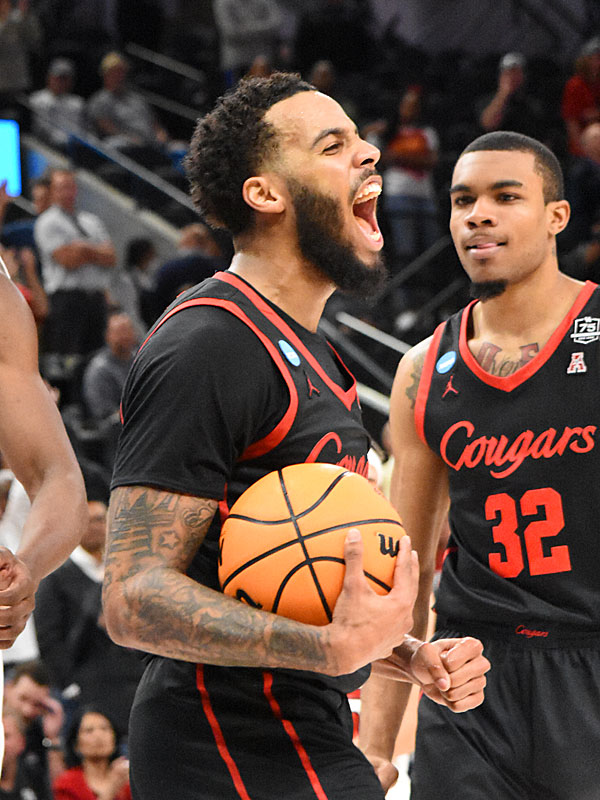 Houston’s Kyler Edwards hit five 3-point shots and scored 19 points Thursday night against the Arizona Wildcats. Defensively, Edwards helped to guard Bennedict Mathurin, who was held to 15 points on 4 of 14 from the field. — Photo by Joe Alexander.