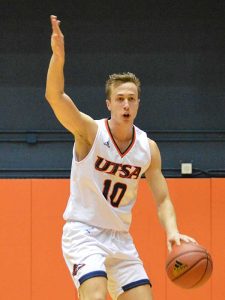 Erik Czumbel is averaging 4.4 points in 12 minutes off the bench through UTSA’s first five games. – Photo by Joe Alexander

Hoping to break through with their first victory of a new season, the UTSA Roadrunners are considering a change in the starting lineup on the eve of tonight’s home opener.

Tipoff is set for 7 p.m. at the Convocation Center.

Asked if Czumbel could get his first start, Henson said it could happen.

“We haven’t made the full decision on that, but there’s a very good chance,” the coach said.

Surprisingly, the Roadrunners haven’t won any of their first five games.

Moreover, they couldn’t sustain much consistency in a road opener at Oklahoma, in three neutral-site games in Florida and, finally, in a 32-point road loss Monday at 15th-ranked Utah State.

“We haven’t played the way we expected to, the way we are capable of, against some really, really good opponents,” Henson said. “We expected to be a little further along than we were.

“(It was a) tough start. We got to figure some things out. We got to defend better. Got to get better possessions offensively. We got to settle into a (playing) rotation.

“It’s a combination of everything.”

Hopes were high coming into the season with the presence of scoring stars Jhivvan Jackson and Keaton Wallace and a cast of promising newcomers.

With those two 20-point scorers from last year returning, the Roadrunners were picked to finish second in Conference USA.

Readying for a three-game homestand, UTSA has yet to make much magic.

The Roadrunners come in shooting an unsightly 34 percent from the field as a team. They’re averaging only 63 points. Opponents are averaging 81, including 86.5 the past two games.

“We haven’t been making shots, and we haven’t been getting the stops we needed,” Jackson said. “We’re really ready to step it up and start winning some games.”

Henson hopes that a return to the home court will help.

He also hopes that by playing Czumbel more at the point, he can relieve Wallace from some of his ball-handling responsibilities and allow him to start finding open spaces and knocking down more threes.

“We got to get Erik in there a lot more, because that’s going to help Keaton and Jhivvan,” Henson said.

UTSA’s starting backcourt tonight could be Czumbel, with Jackson and Wallace on the wings.

In that case, senior Byron Frohnen likely moves to the power forward, with either Atem Bior or Luka Barisic at center.

For the past three years, the Roadrunners started Giovanni De Nicolao at the point, and he emerged as a steady passer and ball handler who didn’t shoot much unless a play broke down.

He was solid defensively.

Czumbel has also exhibited strong defensive capabilities, but on offense, he has proven to be more of a shooter than a facilitator — at least, to this point.

He has four assists and four turnovers.