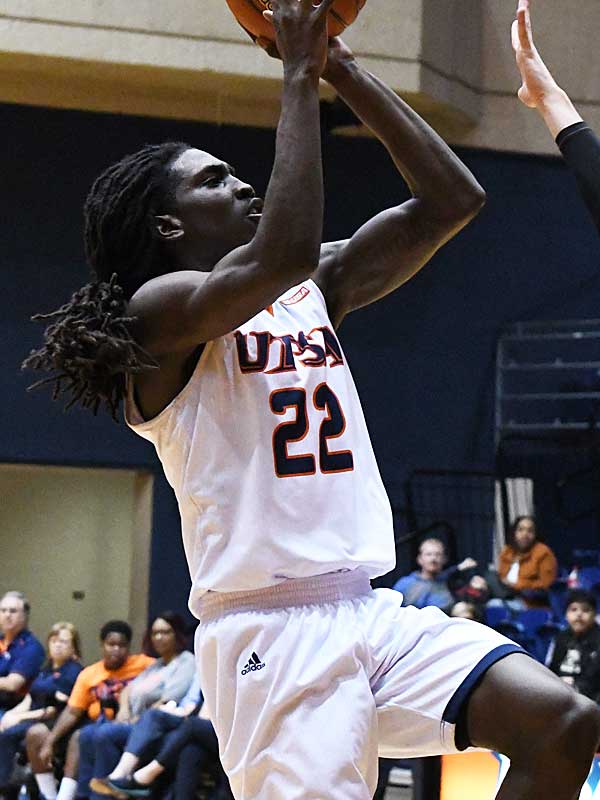 Playing with a head cold, Keaton Wallace scored a team-high 30 points Saturday against Our Lady of the Lake . – photo by Joe Alexander

Shrugging off a slow start, the UTSA Roadrunners roared to their highest point total of the season in a 99-64 victory Saturday afternoon over the NAIA Our Lady of the Lake Saints.

Keaton Wallace, battling a cold and a sore throat, nearly didn’t play but emerged as the focal point in the UTSA attack with 30 points.

Jhivvan Jackson, the leading scorer in NCAA Division I, added 20 as the Roadrunners improved to 6-2 in their last eight games leading into conference play.

After the first 10 minutes, the game tilted into UTSA’s favor, with the home team building a 52-43 lead at half.

The visiting Saints, under pressure from bigger and more physical athletes, never came within single digits after intermission.

OLLU was limited to 29 percent shooting for the game, including 18.4 percent in the second half, in front of an announced 1,087 at the Convocation Center.

Roadrunners coach Steve Henson wasn’t thrilled with the slow start and sporadic execution on offense against an out-manned opponent in OLLU.

But he said he feels good about the team leading into the road trip to Florida. 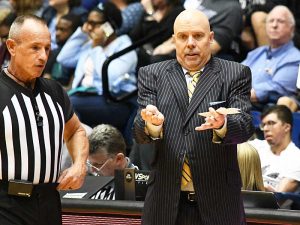 Steve Henson states his case with a referee Saturday during a lopsided victory over Our Lady of the Lake University. – photo by Joe Alexander

In the team’s last game before Christmas, it played well in routing Illinois State, 89-70.

“The more I watched (on film), our defense in that game was really, really good,” Henson said. “So, I feel good about it. The rebounding continues to improve. You see the progress on film.

“We’re contesting shots (with) legitimate hands in the face. We’re right up on guys. That’s been a noticeable improvement.”

Trailing for most of the first half, the Roadrunners woke up in time to outscore the Saints by nine at intermission.

Henson called time out 90 seconds into the game to emphasize the need to guard against the three-point shot.

Jared Embry nailed a three-pointer, one of seven for the visitors before intermission, boosting the Saints into a 17-12 advantage with 15:35 remaining.

But the Roadrunners responded by outscoring the San Antonio-based Saints 40-26 the rest of the way, with Wallace (16 first-half points) and Jackson (13) taking the lead.

Wallace, who was sleeping in the training room during a morning shoot-around, hit 6 of 10 from the field and 3 of 5 from three-point territory.

He nailed a three from the top of the arc at the halftime buzzer.

For the game, the junior from Dallas finished 11 of 16 from the field, hitting a variety of drives and mid-range floaters. He also nailed and 5 of 9 from three.

On playing with a cold, Wallace said, “I feel like when I’m on the court, I just stop thinking about it. It’s just a different type of mindset, I guess.”

Keaton Wallace buries a three for the final bucket in the first half. UTSA leads Our Lady of the Lake, 52-43, at the break. https://t.co/hyCDEtJ4sq pic.twitter.com/rpCvHMLSrO

UTSA started the season 0-5, with all of the losses coming away from home. Within its recent 6-2 streak, the Roadrunners have been 5-1 at home. Three of those victories (against Wiley, UT Permian Basin and OLLU) have come against sub-NCAA Division I programs. They are 0-2 against D-I power conference opponents (Oklahoma and Oregon State) and 0-1 against Utah State, ranked 15th in the nation at the time.

Well-traveled forward Eric Parrish has joined the UTSA basketball program and was on the bench for the OLLU game.

UTSA announced Parrish’s signing on Dec. 10. He is a 6-foot-6 wing who was rated as the No. 4 junior college player in the nation last season. 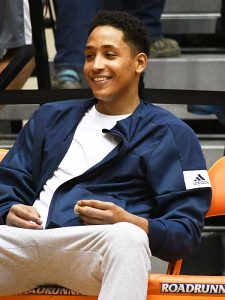 Newcomer Eric Parrish, one of the top junior college players in the nation last season, was on the bench with the Roadrunners Saturday. – photo by Joe Alexander

It’s possible Parrish could play for the Roadrunners this season, but Henson said it won’t be right away.

“He’s got two things going,” Henson said. “He’s not eligible right now, and he’s got an injury. About a week ago, about the same day he got admitted to school, he was training and he broke his finger.”

Initially, coaches thought the injury might require a long-term recovery. Henson said that after review, Parrish is “several days away from practicing.”

It’s uncertain when the NCAA will rule on the eligibility appeal. But the coach said it won’t be by Thursday’s conference opener.

Parrish joined the program at Nevada last summer. But Nevada announced in late October that he had left school. He didn’t play for the Wolf Pack, according to a report at nevadasportsnet.com.

UTSA forward Atem Bior drives for a layup. Roadrunners
lead the NAIA Our Lady of the Lake Saints, 37-36. 3:54 left in the half. https://t.co/hyCDEtJ4sq pic.twitter.com/PcSD5BZlf8