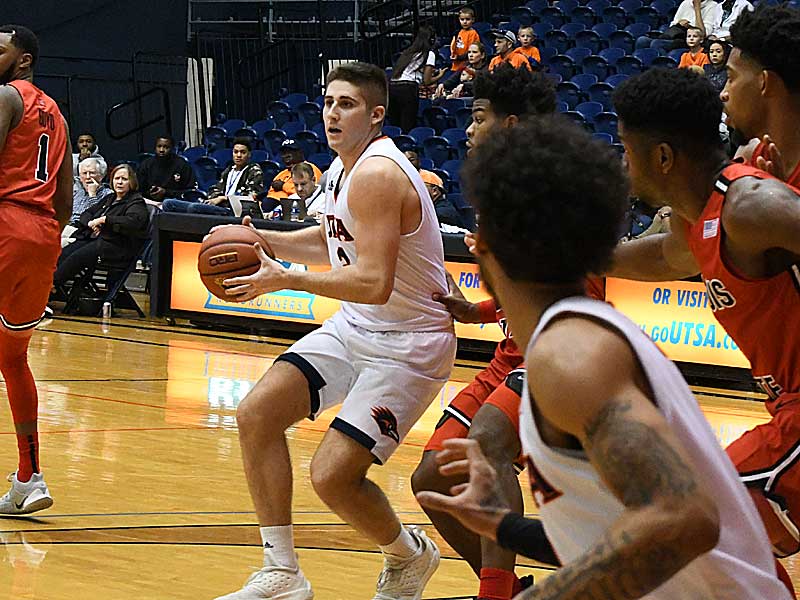 Senior forward Byron Frohnen has started 113 games in a row for the UTSA Roadrunners. – photo by Joe Alexander

The UTSA Roadrunners remain a work in progress — far from a finished product, but confident in their abilities — leading into a Conference USA opener Thursday night at Florida Atlantic.

Veterans on the squad believe they can win the conference. But for that to happen, they know they will need to play at a much higher level than they’ve achieved to this point.

“It’s good to see that we’re finally putting stuff together,” UTSA senior Byron Frohnen said. “We had a tough start to the year. But we’re feeling very confident right now.

“Going into conference, we’re not right at the top, but we’re at full strength and we’re ready to go.”

One reason for the optimism centers around improved play from Frohnen, who has started 113 consecutive games since first suiting up UTSA as a freshman in 2016-17.

As UTSA started the season 0-5, much of the talk centered on how the Roadrunners needed to get more out of junior guard Keaton Wallace.

But Frohnen also wasn’t playing up to standards.

“Part of that was continuing to deal with issues with his body, and not feeling 100 percent physically,” UTSA coach Steve Henson said. “Then Byron hit a little stretch where the ball just didn’t go in the hole for him.

“There were shots around the rim that he typically shoots 55 or 60 percent (and) he was shooting 35 or 40 percent. Just a combination of not feeling good physically and dealing with a confidence issue around the rim.”

In the past two games, Frohnen has stepped up his production, pulling down 18 rebounds and shooting 7 for 12 from the field.

He’s also moving the ball well, passing for 12 assists in his last four.

With the team led by Jhivvan Jackson and Wallace in scoring, Frohnen is asked to play defense and to rebound primarily.

But when his offense is working, hustling to get easy looks around the rim and crashing the offensive glass, the Roadrunners are a much better team.

“Now his body is feeling good,” Henson said. “He’s feeling fresh. His body weight is down, which is a good key for him. He’s got good energy.”

In the fall, the mechanical engineering major from Las Vegas was taking a 14-hour load, often staying up well past midnight to finish assignments and projects.

Frohnen acknowledged the academic stress from his recently-completed fall semester.

“I had a crazy load in my senior year of school,” said Frohnen, who carries a 3.2 grade point average. “Classes were really tough. I had engineering projects and stuff like that going on.

“Finals week was a rough week. I was up to like 3 a.m. every night. That was a tough week. I’m glad that’s over with.”

In 2016, the 6-foot-6 Frohnen was part of Henson’s first recruiting class.

He’s been a solid contributor to an improving program ever since, averaging 7.0 points and 6.9 rebounds for his career, while defending everyone from 6-10 centers to point guards.

Now he’s a senior, trying to make the most of his last season.

“I remember being a freshman like yesterday,” he said. “Seeing these younger guys come in (this year), I was in their shoes. It just flies by. You can’t take a day for granted. I wish I could go back and play harder on certain days.

UTSA (6-7) has won only three games this season against NCAA Division I competition and has a NET rating that’s No. 249 out of 353 teams in the nation and No. 12 in its 14-team conference.

But Frohnen didn’t hesitate to say he thinks the Roadrunners can win the C-USA title.

UTSA guard Adokiye Iyaye has a broken thumb on his right hand, Henson said. The coach said Iyaye, a defender and an energizer who plays off the bench, won’t play this weekend as the Roadrunners prepare to face FAU Thursday and then Florida International on Saturday in Miami. 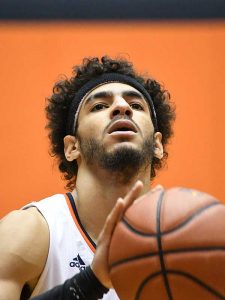 Jhivvan Jackson ranks second in the nation in scoring at 26.2 points per game. – photo by Joe Alexander

The Roadrunners are 6-2 since their 0-5 start. Jackson averages 26.2 points, second in NCAA Division I behind Markus Howard of Marquette at 26.3. Wallace is averaging 16.4 points, 4.5 rebounds and 3.9 assists.

Three of the Owls’ eight victories have come against sub-Division I competition. FAU, listed at No. 227 in the NET ratings nationally and No. 11 in the C-USA, lost 60-58 in its last outing Sunday at South Florida. Newcomer Cornelius Taylor leads FAU in scoring with 11.2 points.

Last year, the Owls lost on the road at UTSA, 86-74. They finished 17-16 overall and 8-10 in the C-USA in Dusty May’s first season as head coach. The Owls dropped a 57-56 decision to Louisiana Tech in the first round of the C-USA tournament.