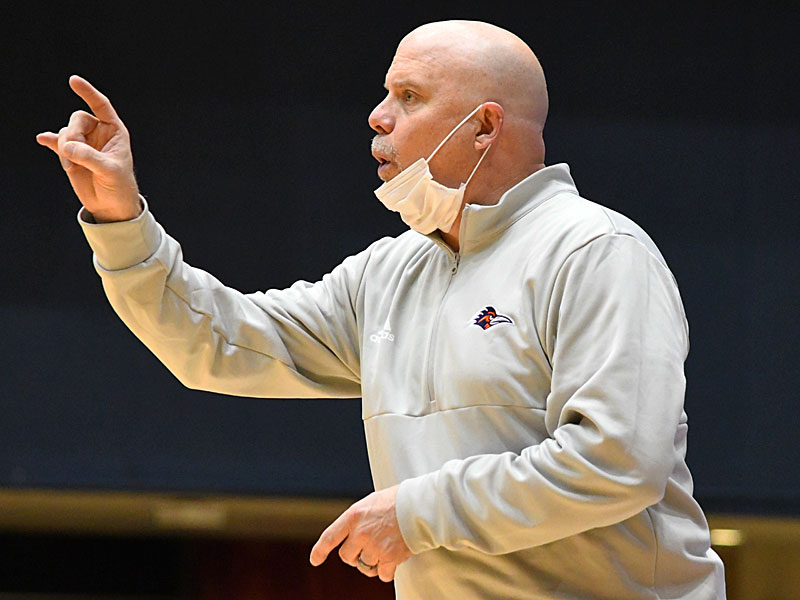 Plenty of questions swirled around the UTSA Roadrunners Friday morning as they prepared for a film session at noon, followed by a short practice and then an afternoon game Saturday against the powerful Louisiana Tech Bulldogs.

In addition, they’ve lost four of their last five games, including four straight against NCAA Division I competition.

Perhaps most concerning, the Roadrunners have now dropped their first two on the Conference USA schedule leading into Saturday’s 3 p.m. tipoff against Kenneth Lofton, Jr., and the Bulldogs.

It doesn’t get any easier after that as UTSA braces for three C-USA games in a row on the road.

Addressing the team’s situation after a 74-73 loss at home Thursday night to Southern Miss, UTSA coach Steve Henson acknowledged the challenge but maintained a positive outlook, given 16 games remaining on the C-USA schedule, including one Covid-related makeup.

“A lot of games left,” Henson said. “We got to play better, bottom line. This was an important game, because it was a home game. We talked about the early stretch (in conference) with a bunch of road games and home games against good opponents.

“So, it’s going to be important for our guys to stay together. They’re a little frustrated. We’re not playing the way we think we can. It doesn’t get any easier on Saturday. We know that. Then we go on the road for two.

“We got to keep our heads up and make progress.”

The Bulldogs ran their record in conference to 3-0 late Thursday night with a 64-52 road victory at UTEP. LA Tech smothered UTEP defensively, holding the Miners to 33 percent shooting. The Bulldogs also were aggressive in controlling the boards, 42-31.

Much of that was because of Lofton, who had 11 points and 18 rebounds. Outside of Lofton, one of the premier post players in the nation, sophomore guard Cobe Williams has evolved into a dangerous offensive threat.

Williams has scored 57 points in conference, including 22 against Marshall and 18 against Western Kentucky in home victories last week. The 6-footer from Dallas had 11 of his 17 on the Miners in the first half, when the Bulldogs surged to a 41-25 lead.