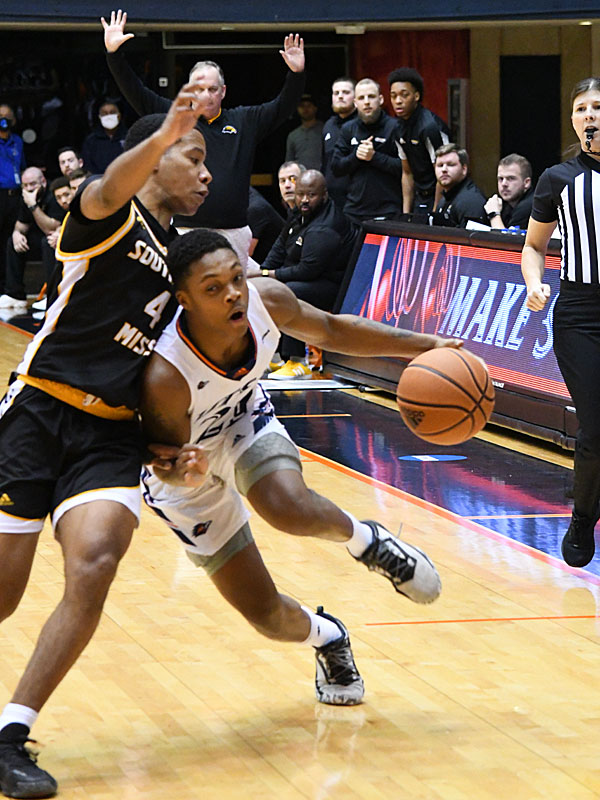 The Southern Miss Golden Eagles snapped a six-game losing streak at the expense of the UTSA Roadrunners Thursday night, making just enough plays down the stretch to emerge with a 74-73 victory at the Convocation Center.

For UTSA, it was a heartbreaking setback in the team’s first true test without high-scoring guard Dhieu Deing, whose departure from the program apparently had been percolating since early in the week but was announced just before tipoff.

“We’re not going to go into any great detail about it,” UTSA coach Steve Henson said after the game. “You know, we love him. Dhieu did a great job for us. He worked really, really hard. He competed. He loved the game. He just felt like he had some opportunities to go play professionally. 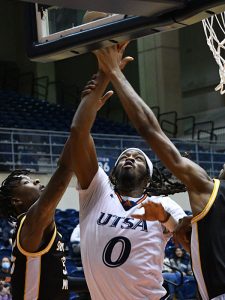 Was it a foul? Nothing was called as a Southern Miss player appears to hit the arm of UTSA’s Cedrick Alley Jr. on the game’s last play. Alley finished with 15 points, four rebounds and three steals. — Photo by Joe Alexander

“We wish him well with that. It was pretty abrupt. I don’t know if that’s been on his mind or not. It just happened this week, and we wish him well.”

Deing, a junior college transfer who had played for South Sudan in an Afro Basket tournament over the summer, finished his 13-game UTSA career averaging 15.3 points.

In what would be his last game for UTSA, went 0-for-11 from the field and scored two points in a 28-point road loss at UAB last Saturday.

On Monday, he didn’t play at home against Dallas Christian College, and the Roadrunners rolled to an easy victory, winning 101-48.

Returning to conference play against Southern Miss, the Roadrunners played fairly well, considering that Deing had carried such a heavy load in November and December. Just not well enough to keep them from falling to 0-2 in C-USA play. 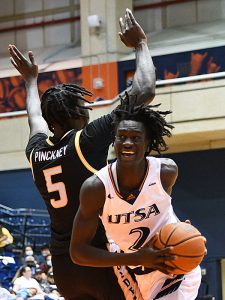 Forward Aleu Aleu made an impact for the Roadrunners with 11 points and seven rebounds in 23 minutes. — Photo by Joe Alexander

Guard Jordan Ivy-Curry led four UTSA players in double figures with 23 points. In the second half, he scored 19 and the Roadrunners shot 48 percent from the field. They also knocked down six of 10 shots from long distance.

In addition, Aleu Aleu continued to show off impressive skills, which included an offensive rebound and an up-and-under move at the hoop, a step-back, three-point shot and a pull-up jumper from the free throw line after faking a drive.

It was all included in an 11-point showing.

UTSA’s troubles started in the first half, when their defense sagged and their offense didn’t click and they fell behind by 10. Undeterred, the Roadrunners rallied behind Aleu and Jacob Germany to pull into a 32-32 tie at intermission.

After taking a five-point lead early in the second half, the Roadrunners allowed the Golden Eagles to get off the mat and make their own comeback.

The trio helped turn a 37-32 deficit in the first minute after intermission into a 41-39 lead for when Bolden drove to the bucket in transition and converted a three-point play.

From there, Southern Miss boosted the lead to 57-49 when Pierre drained two long three-pointers, the second coming with 9:14 left. In response, UTSA rallied again.

The Roadrunners made some stops and kept chipping away and, with 1:17 remaining, cut the visitors’ lead to 72-71 on three Ivy-Curry free throws.

On the next possession, the Golden Eagles seized the upper hand with the help of what arguably could be called a little luck.

Defended well on the wing by the Roadrunners’ Aleu Aleu, Pierre hoisted a three-point shot from the corner that was long. 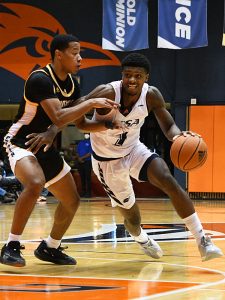 If the Roadrunners could have grabbed the rebound, they could have come up the court with about a minute remaining with a chance to take the lead.

Instead, Pierre’s miss skipped off the rim, caroming long and into the waiting hands of Bolden, who was fouled. Headed to the line facing a one-and-one situation, he made both for a 74-71 edge with 47.3 seconds left.

On the other end, UTSA moved to make up for the missed opportunity, taking only about 12 seconds to score. Ivy-Curry found Cedrick Alley Jr., who went up strong to the hoop for a layup, bringing the Roadrunners to within 74-73.

On the Golden Eagles’ last possession, Walyn Napper misfired on a runner in the lane, giving the Roadrunners one last chance.

Ivy-Curry pushed it up court again. Once again, he dished under the basket to Alley. This time, Alley drew contact. His attempt was batted away at the buzzer by Moore, a 6-foot-10 St. John’s transfer.

“We were going to try to get a stop and push it, which is exactly what we did,” Henson said. “We got it to Juice. We wanted to attack before they got their defense set.

He drove it hard to the outside, and he had a chance to turn the corner. (But) he didn’t. He really kept his composure and got back in the middle and made a real nice play to Cedrick. We had a shot right at the basket. We just couldn’t convert it.” 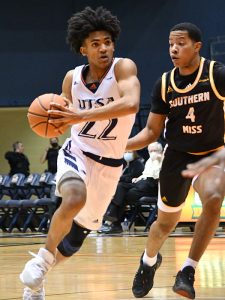 Asked if he could see contact from a defender on the play, Henson shrugged, declining an opportunity to suggest that the home-team Roadrunners deserved a call at that critical juncture.

“It was the right play for us to make,” the coach said. “They challenged the shot. They’ve got good length in there. We had a lot of shots that looked just like that through the course of the game. We just weren’t able to convert.

“I’d have to look at film to see if there was contact. We just don’t want to be in that position.” 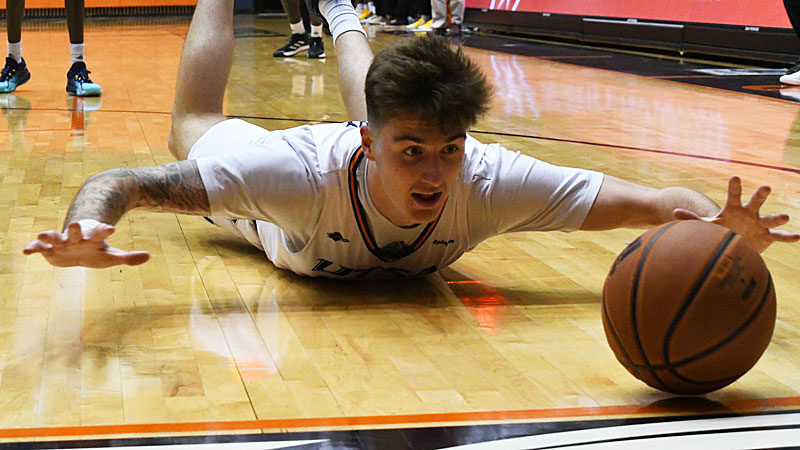 Jacob Germany hits the floor in a scramble for the ball against Southern Miss. Germany had 10 points, nine rebounds and three steals. — Photo by Joe Alexander