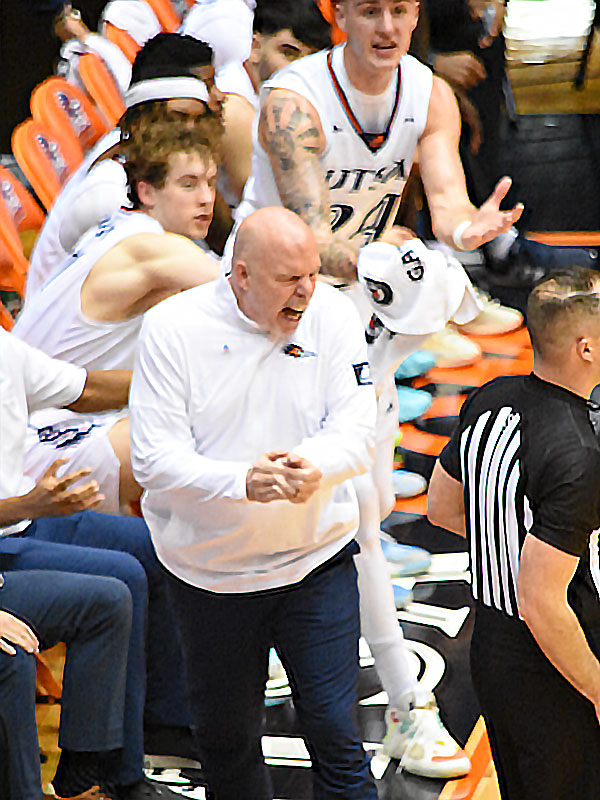 UTSA coach Steve Henson showed some raw emotions on a tough night, during which his team was denied a victory against the North Texas Mean Green, the No. 1 squad in Conference USA. The slumping Roadrunners host the Rice Owls in the regular-season finale Saturday afternoon. – Photo by Joe Alexander

In a record-breaking season, the North Texas Mean Green just keep grinding on opponents until they fold.

They did it to the UTSA Roadrunners Thursday night, executing with precision in the final 13 minutes to win 59-48 for their school-record 15th straight victory.

In some respects, the Mean Green beat the Roadrunners at the 3-point line. 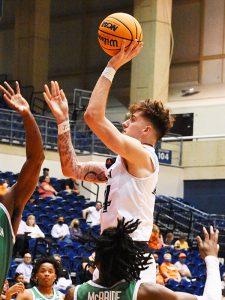 Jacob Germany produced 17 points and 10 rebounds but also picked up a technical foul in the second half. – Photo by Joe Alexander

North Texas, which has already clinched the best record in Conference USA, overcame less-than-stellar free-throw shooting with seven 3-pointers, all while hounding UTSA into a 1-of-11 performance from beyond the arc.

“We didn’t have our best game tonight … but, give UTSA some credit. They played with a purpose,” North Texas coach Grant McCasland told the team’s radio broadcast.

Trailing by 13 points late in the first half against a team that has lost only once since Thanksgiving, the Roadrunners enjoyed their best stretch in the first eight minutes after halftime, getting consistent scoring from center Jacob Germany and cutting the lead to three on two occasions.

A three-pointer by Erik Czumbel trimmed the Mean Green’s lead to 35-32 with 12:42 remaining.

From there, North Texas outscored UTSA 10-2 in the next three minutes, boosting their advantage to 11. Baskets by Thomas Bell and Tylor Perry capped the run for the Mean Green. 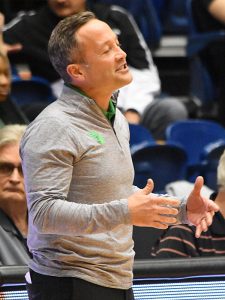 North Texas coach Grant McCasland has led his team to 23 victories, including a school record 16 of them in conference play. – Photo by Joe Alexander

After that, the Roadrunners ran out of steam. They failed to come any closer than eight the rest of the way and lost their third game in a row.

The hard-luck Roadrunners have also dropped eight out of nine and 14 of 17 in falling to 9-21 on the season.

“Good team,” UTSA coach Steve Henson said. “Got to give them credit. They’ve been good for a couple of years now. Their style of play is very difficult to play against. Their defense is really good. Their offense just grinds you and grinds you and shortens the game.

“They don’t play many guys. Guys they do play can all go get a bucket. They’re a good team.”

With the victory, North Texas swept two games from UTSA in the season series, increasing its lead all-time to 19-12. The Mean Green have won eight of their last 10 against the Roadrunners since 2015-16.

With the regular-season finale set for Saturday afternoon at home against Rice, UTSA doesn’t have much time to get its game together before next week’s Conference USA tournament.

“Right now we’re pretty frustrated,” said UTSA guard Erik Czumbel, who played point guard most of the night and had eight points and three assists. “I think we were close to making (a) comeback and to be able to flip the switch. (But) we were not quite able to do so. 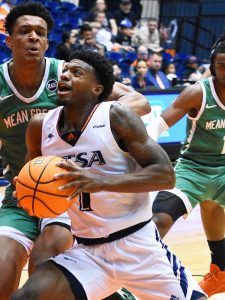 “So, I mean, right now, it’s just frustration. We just got to flip to the next page tomorrow and think about Rice.”

Over the last two and a half months, everything that could go haywire has gone haywire for the Roadrunners — everything from player defections, to injuries and at least one key defensive component lost to academics.

Not to mention a rash of Covid-19 disruptions.

“It’s hard when you have a season with so many challenges (and) you’re losing,” Czumbel said. “The most important thing is staying together. We haven’t had any fights or anything, and that’s what matters, I think.”

UTSA — Jacob Germany 17 points and 10 rebounds in 30 minutes. Seven of 16 shooting. Darius McNeill 12 points on five of 12 from the field. Dhieu Deing, six points on three of eight. Deing was 0-for-4 on 3-pointers. Walk-on Isaiah Addo-Ankrah, perhaps the team’s most consistent perimeter threat over the past month, was held scoreless. In 21 minutes, he took one shot and missed it.

The relentless Mean Green held the Roadrunners without a field goal for the final 6:49 of the first half and took a comfortable 28-17 lead into the dressing room at intermission.

Coming in, the streaking Mean Green had won 14 games in a row and had posted a 20-1 record since Thanksgiving.

In their last outing, they had clinched the Conference USA regular-season title by beating the Louisiana Tech Bulldogs 56-49 in Denton.

With the victory, coming last Saturday before an announced crowd of 8,522 at the Super Pit, North Texas set a school record with its 15th conference win and matched the school record for the longest winning streak.

Slumping UTSA is coming off a 68-56 loss at home last Thursday to UAB. The Roadrunners have lost two straight and seven of eight.

After losing two players to season-ending injuries, another as an academic casualty and a fourth to the transfer portal, they have dropped 13 of their last 16.

UTSA and North Texas played on Feb. 5 in Denton, with the Mean Green winning 69-45.

North Texas is 18-12 against UTSA in the all-time series.

The Mean Green have prevailed consistently through the last few years, winning 7 of 9 against the Roadrunners since the 2015-16 season.

Jacob is on one in the second half.