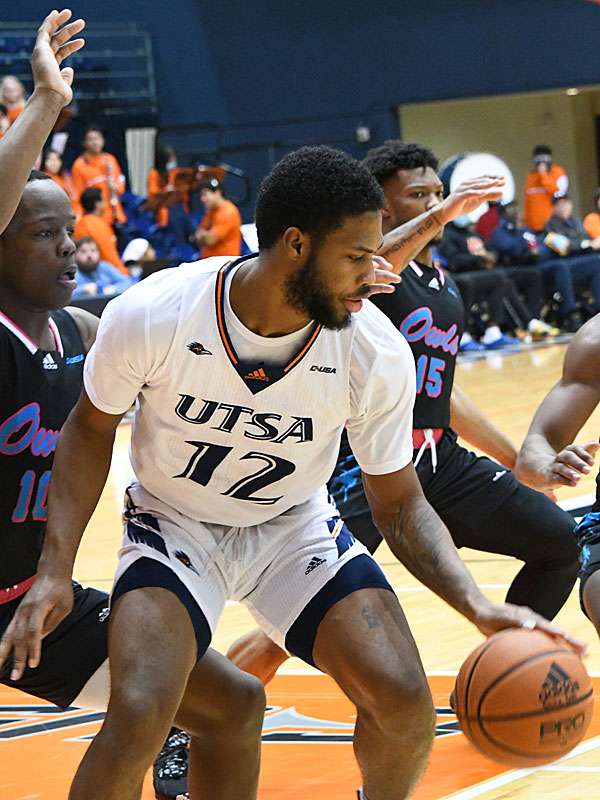 After three seasons at UTSA, Phoenix Ford is set to play his last two games at home for the Roadrunners this week. UTSA hosts North Texas on Thursday night and Rice on Saturday afternoon. – File photo by Joe Alexander

By Jerry Briggs
Special Report for The JB Replay

UTSA senior Phoenix Ford is a family man in more ways than one. He grew up in a loving home in Florida as one of 11 siblings. When the 6-foot-7 power forward arrived in San Antonio in 2019, he said he had the same feeling on his first day with the Roadrunners.

He said it felt like everyone embraced him. Now, Ford has a family of his own. On Christmas Eve, his wife Alicia gave birth to the couple’s first child, a daughter named Genesis. It’s been a bit of a whirlwind ever since. 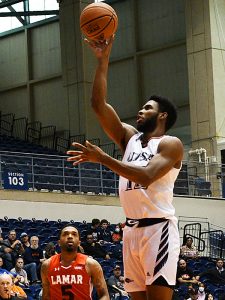 Between school and practice and games and road trips, not to mention a few late nights with a crying infant on his shoulder, life for the Roadrunners’ resident girl dad has been a bit hectic.

“Ah, just changing hats every hour,” Ford said Wednesday. “When I’m home, I put my dad hat on. When I come here, I got to put my student-athlete hat on. It’s fun, a lot of time management.

“I (get) back home from practice, and (I’m) pretty tired. But coming home to my family every day gives me a boost of energy to keep going.”

Allowing the nostalgia to flow freely, Ford reflected on his UTSA career as he prepared to play his last two games at home with the Roadrunners, against North Texas on Thursday night and against Rice on Saturday afternoon.

“My favorite memories?” Ford asked rhetorically. “Umm, I mean, there’s a ton, I would say.”

Mostly, he’ll remember all his teammates, who he claimed he will have relationships with for the rest of his life. Even this year, as the Roadrunners struggle with a 9-20 record, Ford pointed out the positives.

Specifically, he praised the way Head Coach Steve Henson and his staff have carried themselves through a down season.

“When things are hard, and we’re not having the season we would (like) … they still come in every day with the right approach, with a positive attitude,” he said. “That takes a lot of character. I really respect all the coaches for that.”

A little more than one calendar year ago, things were different. This time last season, the vibe was lit. The Roadrunners had Jhivvan Jackson and Keaton Wallace, and the two senior guards were starting to heat it up on offense. The team was winning.

At the same time, Ford’s world off the court had turned upside down with news from Florida – his father was seriously ill. After the C-USA tournament, Henson urged him to go home and be with his dad and then return in the fall.

That way, he could play another year and finish up with his work on a multidisciplinary studies degree. It was an emotional time for everyone involved.

“Last spring, during the second half of the season, I got word that my dad had gotten pretty sick,” Ford recalled. “He was dealing with heart issues, congestive heart failure. I’d come in (to practice), and I tried to leave my personal stuff off the basketball court.

“When the season ended, I decided to go back home because things were getting worse. I wanted to see him before he passed. So, I got a chance to say goodbye before he passed in April.”

Alfredo Luis Ford III, a member of the Mt. Zion Progressive M.B. Church, was 64 when he died last April 17. Phoenix’s father, who was born in Colombia, had worked for the U.S. government at the Veteran’s Administration. Together, Alfredo and Denise Ford raised 11 kids. Yes, 11.

Basically, while Alfredo worked at the V.A., Denise would look after the home front. She home-schooled all the kids. Five of them played sports, so getting to and from practices and games was always an adventure.

“We had an 11-passenger van, a white van,” Phoenix said. “I was so embarrassed by it when I was younger. But it got us from Point A to Point B. They loaded us all up, and wherever we had to go to, they dropped us all off. Then they picked us up at the end of the day.”

As fraternal triplets, Phoenix and Keanu and Griffin Ford were the youngest in the family. All of the brothers played ball, and they became teammates at St. Petersburg High School.

“We were (teammates),” he said, grinning again, “(even though) some of us got more playing time than others … But it’s definitely awesome getting to play with your brothers. I played with the triplets and then I played with a brother ahead of us. It was nice.”

At UTSA, Ford’s calling card is his defense and his ability to knock taller players off their spot on the low post.

“I think he’s enjoyed knowing he’s going to play every night this season,” Henson said. “Some nights more than others. Started him at the four a few nights (when) he and Jacob (Germany) played alongside each other. For the most part, he’s been Jacob’s backup at the center.”

Henson said Ford is healthy now but has struggled with issues in the past.

“Previous years, he’s struggled with some tight back issues,” he said. “He hasn’t really had any issues with that in several weeks. He’s feeling pretty good. He dunked in a game the other night. Might be the first dunk he’s had in a game.

“He just doesn’t dunk very often in practice. Our guys were excited for him in that regard. He’s just such a good teammate. Very mature. All about team. Very unselfish.”

Henson said that since the baby was born, he hasn’t noticed that much of a change in the way Ford carries himself at practices or games.

“It’s been great,” the coach said. “Again, he’s so mature. We knew he’d be a great father. For the most part, I don’t think there’s been any detriment to it at all (in his basketball). He came in the other day and looked like he hadn’t slept. Baby was up most of the night.

“A day later, he came in and looked refreshed. That’s part of parenthood.”

In terms of his future, Ford has no illusions about pro basketball. The likelihood that he will see much interest from pro franchises is not high. Scheduled to graduate in May, he said he hopes to go into real estate, and he hopes to pursue that dream in Texas.

“I want to stay here for a few years,” he said. “I really like San Antonio. I’ve fallen in love with the city, with the culture. I do like Florida. I do miss the beaches and stuff like that. But I like San Antonio a lot, so I think I’ll start out here first and then see what’s next.”

As for life at home, Ford has a mental road-map on how to approach fatherhood through his own experiences years ago.

“Umm, just trying to do what’s best for my child,” he said. “My parents did make a lot of sacrifices, so seeing them, and the way they raised us (was a good example). Even though we had a lot of kids, they gave us each our own individual attention and love. I don’t think anyone was left out of the picture.”