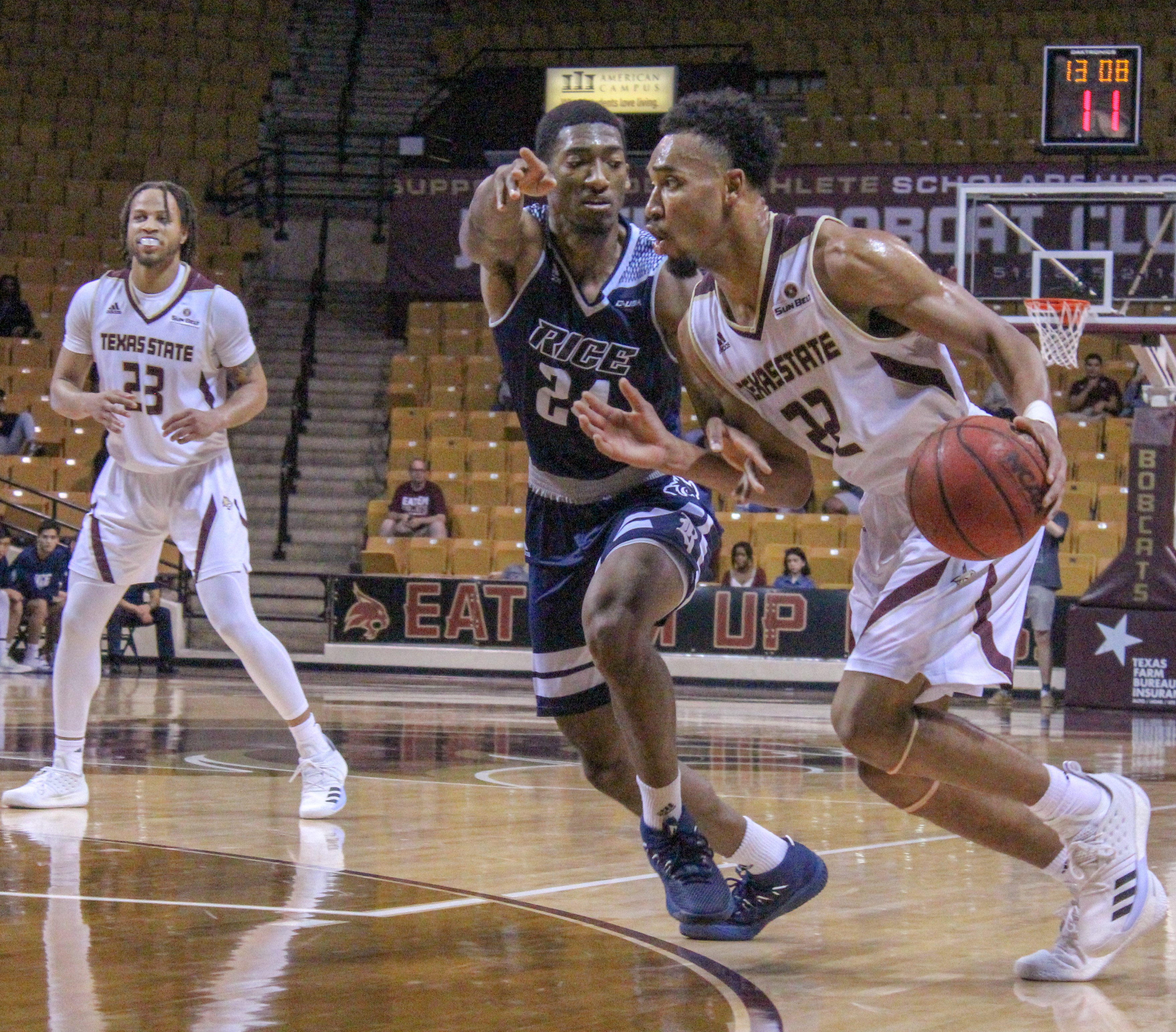 SAN MARCOS — Deep down inside, Texas State shooting guard Nijal Pearson always knew he could play at a high level in NCAA Division I basketball.

“I always figured it would come in due time,” the 6-foot-5 junior said Friday afternoon.

Even though Pearson didn’t have the total skill package at Beaumont Central High School, Texas State coach Danny Kaspar said he could see the potential.

“He’s like some of my players at Stephen F. Austin,” the coach said. “They weren’t recruited very hard, and the knock on them was, they were not great shooters.”

On the other hand, Kaspar said he always sees intangibles in some young men, particularly those who excel both in academics and athletics.

He said he tells them honestly that they will need to work on their offense.

“You just knew (Pearson) would do it,” Kaspar said. “He was in, I want to say, the top ten (academically) in his (high school graduating) class. He’s one of our best students here. So, he just competes in every way, shape or form. In the classroom. On the court.

“(He) is very much a competitor. You challenge him about getting in the gym and putting up 400 and 500 shots a day, and he responds.”

The work has paid off for Pearson, who leads the Bobcats in scoring at 21 points per game coming into a weekend road test against the UTSA Roadrunners.

Pearson has emerged as the story of the season so far for Texas State (6-1) as it prepares to play UTSA (2-5) on Saturday afternoon at the Convocation Center.

The Bobcats have won four straight, including three last week at the Portland Classic in Oregon and again Wednesday night at home against Rice.

Pearson scored a career-high 33 in the finale against the Portland Pilots, and then added 25 for good measure in a 74-60 victory over the Owls.

“We’re just having fun playing together, sharing the ball and playing defense,” he said. “For the most part, we figured we were a pretty good team. We knew in the summer time. So, I wouldn’t say we are really high right now. Basically, we’re doing what we’re expected to do.”

Beating UTSA is important to Pearson, who is 0-2 in his career against the Roadrunners.

“It’s a rivalry game,” he said. “I’m excited about playing in it. I don’t think I’ve made my mark in a UTSA-Texas State game yet, so, I’m excited that I get a chance to do that tomorrow. I’m anxious to play.”

Last year’s loss still stings a bit, because UTSA rallied in the last 70 seconds to erase a nine-point deficit and win, 79-78.

Asked what he remembers about last year, he shrugged and said simply, just that the Bobcats lost.

Because of a lock-down defense yielding only 37 percent shooting per game, Texas State would seem to have a better chance this year against the Roadrunners, who have struggled some offensively.

“I work hard on my game,” he said. “I just kept working. I knew eventually it was going to happen. I just didn’t know when … But, I’m just staying with it. (I’m trying to) focus, letting the game come to me, having fun out there.”