Guard Jhivvan Jackson said it feels “really good” to be back on the floor, playing in games again for the UTSA Roadrunners. 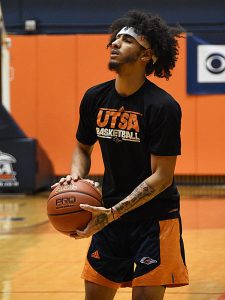 UTSA’s Jhivvan Jackson shoots around before a
Nov. 12 home game against Oklahoma. – photo by Joe Alexander

Likewise, it feels good for the Roadrunners to see their leading scorer from a year ago rounding into form.

“He’s worked so hard,” UTSA coach Steve Henson said Thursday afternoon. “He’s had such a good offseason in so many ways.”

The offseason, for Jackson, was both painful and grueling.

Knocked out at the end of last season with a left knee injury, he underwent anterior cruciate ligament surgery and spent months consumed with strength exercises, combined with basketball workouts.

Jackson sat out the first three games of the new season, but he has since returned to play the last four, averaging 15.5 points in 16.5 minutes off the bench in that span.

It’s hardly a coincidence that UTSA (2-5) has won two straight leading into a Saturday afternoon test at home against the Texas State Bobcats (6-1).

“We were struggling a little bit offensively,” Henson said. “So, it was nice to throw him into the mix. The guys are ready to embrace him in that regard, (and) he’s delivered in a huge way — basically, a point a minute.

“So, it’s pretty amazing to be out that long and step in and do what he’s doing.”

Jackson was cleared medically before UTSA’s three-games in three-days trip to Florida from Nov. 14-16 at the Gulf Coast Showcase.

Originally set to return in the first week of December, he said the doctor told him that he could play in the tournament if he felt he was ready.

Jackson said he had felt ready earlier than that but didn’t want to risk anything.

“I felt great before the first game I played,” he said. “For a couple of practices before that, I felt really great. I told the coach I was ready.”

In the early stages of his return, Jackson has been on a minutes restriction. It was 15 minutes for the three games in Florida and then 20 on Monday in an 86-82 victory at Houston Baptist.

Jackson said he’ll likely be limited to about 20 against Texas State, as well.

Regardless, he has looked good, scoring 21 points each of UTSA’s last two games.

Henson said Jackson’s defense sparked a 12-0 run that erased a six-point deficit late in the game at HBU.

“We got down, and we came out of a timeout, and he was the one that really set the tone defensively,” Henson said. “(He) picked up the ball, got a little ball pressure, ignited our defense.

“He’s a competitor. He’s tough. He’s quick. We count on him for scoring, but he can do other things, as well. Getting him back in there is helping us.”