Incarnate Word forward Christian Peevy is in uniform and warming up Wednesdday night as the Cardinals prepare to host the host the McNeese State Cowboys in the Southland Conference opener for both teams. 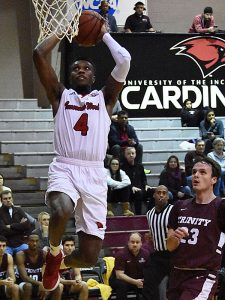 Peevy, UIW’s leading scorer, has been out for two games with an injured hand. He is turning for the McNeese game with a cast on his left (non-shooting) hand. Peevy is averaging 14 points per game.

The game matches first-year coaches at both schools, Carson Cunningham for UIW (5-8) and Heath Schroyer for McNeese (4-9).

In its sixth year in the conference, UIW is looking for its first trip to the SLC tournament.

The Cardinals were ineligible in the first four years of membership as they completed a transition from NCAA Division II to Division I.

Last year, in their first year of elibility, they didn’t make it, finishing 7-21 overall and 2-16.

The Cowboys, from Lake Charles, Louisiana, haven’t been to the tournament since 2016.

UIW will be without Bryce Davis, Des Balentine, Romello Wilbert and Keaton Hervey against McNeese.