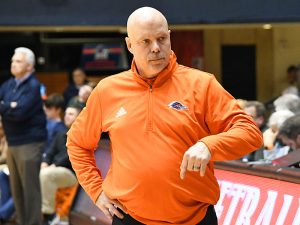 Coach Steve Henson’s UTSA Roadrunners are in final exam week, with their next game set for Saturday in Houston against the Sam Houston State Bearkats. – Photo by Joe Alexander

Coming off a strong performance in a three-point loss in Arizona last Thursday, the UTSA Roadrunners are fine tuning in preparation for a game Saturday in Houston against Sam Houston State.

In their last game, the Roadrunners bolted to an early 12-point lead and led by five midway through the second half before falling to the once-beaten Grand Canyon, Ariz., Antelopes.

Despite the loss, Roadrunners coach Steve Henson said it was “the best we’ve played” this season.

“The theme for a couple of weeks has been having better possessions,” Henson said after Wednesday’s practice. “Taking better shots. Moving the ball more. Taking a big step in that regard.

“I think we’re understanding what good possessions look like. We’re getting a better idea of who we are. You know, we’re not the kind of team that’s going to make 10 or 15 threes most nights.

“I don’t think we’re a bad shooting team. It’s just not who we are right now. I think they’re buying into the idea that they’ve got to make some stronger plays. With more drive and kicks. More paint touches.”

After playing in Phoenix, the Roadrunners returned to San Antonio on Friday and took the rest of the day and all day Saturday off, leading into this week, which is final exams week.

“(We had) Sunday practice, kind of normal,” Henson said. “Monday, we did some skill work, broke up in groups … did a lot of skill work, a very productive day.”

Players had another day off Tuesday and then returned to practice on Wednesday.

Senior guard Darius McNeill, who has missed the last two games, remains a question mark with a foot injury. Henson declined to speculate on when he might be able to play again. McNeill was a starter before he suffered the injury at home against Lamar on Nov. 24.

“He’s made some progress,” Henson said. “He got the (walking) boot off. It’s good to see him walking around. He was on that high-tech treadmill the other day, take some of the body weight off … He was able to jog on that. (But) we don’t have a time frame (for his return).”

Asked if McNeill could be ready for the start of conference play at the end of the month, the coach said “we haven’t even talked about it. We’ll have to see what the doctors tell us.”

Sophomore forward Lachlan Bofinger was running hard Wednesday, obviously in much better physical shape than he has been since twisting an ankle on Nov. 29 at home against the St. Mary’s Rattlers.

“It was really swollen when we went to Grand Canyon the other day. He wanted to play. But we just didn’t think he’d be able to (go),” Henson said. “Sunday, he had an unbelievable practice … He was much, much improved.”