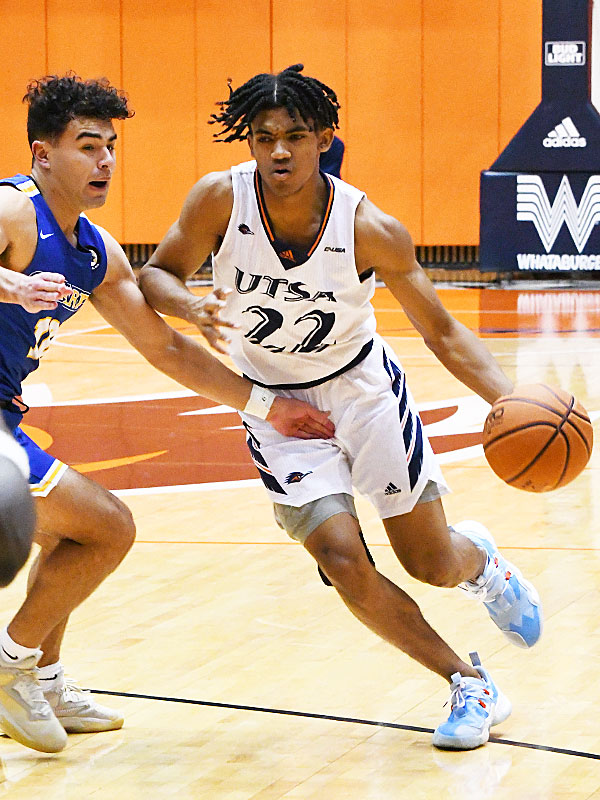 UTSA freshman Christian Tucker, a 6-foot-3 guard from Chandler, Ariz., has been around the game all his life. His father was director of security for the Phoenix Suns. — Photo by Joe Alexander

With a key player injured and with the Conference USA portion of the schedule looming at the end of the month, the UTSA Roadrunners clearly will need a boost in the next three or four games.

They’ll need to develop some additional firepower to augment the production of Dhieu Deing, Jacob Germany, Jordan Ivy-Curry and Cedrick Alley Jr. They’ll need a better flow to their offense, for sure.

When the ball swings around the perimeter, and it lands in the hands of someone who bobbles it or hesitates, UTSA can look extremely ordinary and, against the better teams, quite vulnerable.

To be better, the team will need someone else to emerge.

Lately, one source of optimism has been supplied by walk-on freshman guard Christian Tucker, who has stepped into an injury-related void in the backcourt and has slowly started to gain the confidence of coaches.

In the absence of senior Darius McNeill, who has a foot injury, hasn’t played in the last two games and still isn’t practicing, Tucker has jumped in to try and make a name for himself.

Given the opportunity, the 6-foot-3 walk-on from Chandler, Ariz., has shown a savvy presence, modest bursts of offense and some clutch play.

Averaging about 15 minutes in UTSA’s last three games, Tucker has scored a combined 14 points in that stretch, displaying a knack for driving, drawing contact in the paint and knocking down free throws.

He is 11 for 13 at the line combined against Lamar, St. Mary’s and Phoenix, Ariz.-based Grand Canyon University.

“I feel like my all-around game is pretty good,” Tucker said. “But every time I’m able to get in the paint to make a play, or make a strong layup, I feel like I can do that. Not really many people can stop me from doing that, so I might as well just go to it.”

Tucker scored nine points in 12 minutes off the bench in a 79-73 victory over Lamar on Nov. 24. McNeill went down with a foot injury that day, so it was a welcome sight for Roadrunners coaches.

“He’s doing a heck of a job,” UTSA coach Steve Henson said. “First night we really played him, you could see his court savvy. His gamesmanship. Drew a bunch of fouls that night.

“He had a couple of games where the defense got after him pretty good. But then he settled back down. Made some big shots. Made some big free throws for us.”

Another moment came against St. Mary’s on Nov. 29 when he took a pass from Deing, drove to the rim and was fouled in the waning moments of a close game. He made both free throws to help seal the victory.

“He’s a real confident guy,” Henson said. “Very mature, you know. I’m not surprised. Again, he wasn’t playing at all and then we threw him in there.

“So, he’s going to continue getting comfortable. Like I said, he’s got the right maturity level and confidence level to be able to do what he did.

“That wasn’t easy. To just throw him in there all of a sudden. He’s produced pretty well.”

Tucker, a native of Mission Hills, Calif., moved to the Phoenix area when he was a toddler.

Though he enjoyed playing soccer and flag football as a kid, basketball was his passion.

His father worked as director of security for the Phoenix Suns, so he was around some of the greatest players in the NBA.

“It’s been really good for me,” Tucker said. “Being surrounded by basketball my whole life, it’s pretty much all I know. Watching NBA players, watching all sorts of players compete … has been really good.”

Watching him at practice, you get the feeling that he would enjoy playing basketball even if games were held on a black top somewhere, with chains hanging on the rims instead of nets.

A few days ago, his group made a defensive stop, prompting Tucker to let out a loud scream that could probably be heard in the upper reaches of the Convocation Center.

At the start of the year, he wasn’t playing. Now he is, and Tucker said he welcomes the opportunity. He admitted it feels “really” good.

“My biggest thing is doing whatever it takes to make sure we win,” he said. “As long as I keep doing that, I feel like I can keep getting playing time.”