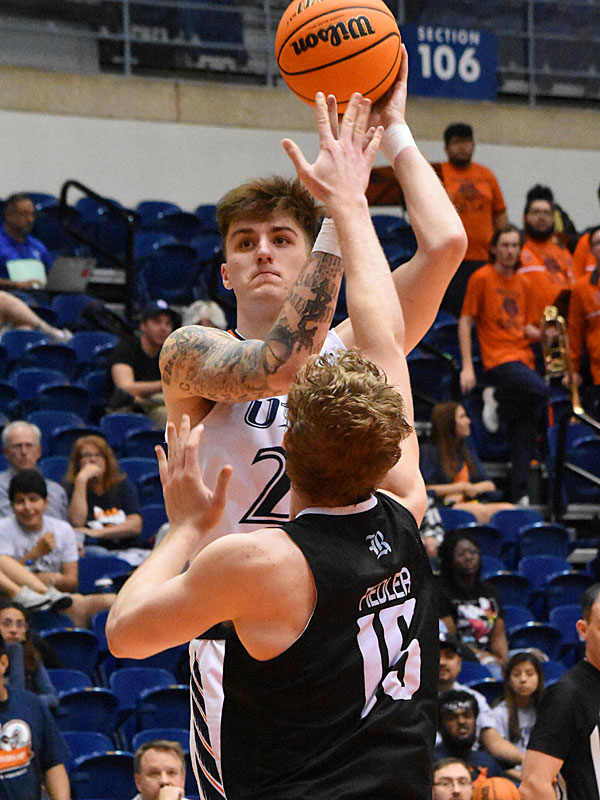 For a team that endured a couple of agonizing multiple-week gaps between victories this season, the UTSA Roadrunners are feeling surprisingly good about themselves leading into the Conference USA tournament.

The Roadrunners will take on the Southern Miss Golden Eagles Tuesday night in the tournament opener.

“We certainly got a couple of guys out for the season with injuries and other reasons, (and) we wish they were with us,” UTSA coach Steve Henson said Monday. “But with this group here, the spirits are good. Practices have been good. (We) made a pretty good run against North Texas, a great team, on Thursday. (We) played well on Saturday (against Rice) and (we’re) fired up to play tomorrow night.”

“I think everyone in this gym would say we’re going down there expecting to win,” said center Jacob Germany, the team’s leading scorer. “I think we all want to win. I’m really proud of our guys, that we’ve fought through this year and all the difficulties we had to face and overcome. Proud of everybody and everyone who stuck through it.”

While players and coaches felt good about themselves as they boarded a bus Monday bound for Frisco, they also have no illusions about how difficult it would be to win the tournament. For the Roadrunners to claim the C-USA title, they would need to win five games in five days.

Then again, they have made strides since they started conference with a 1-12 record.

Sophomore forward Isaiah Addo-Ankrah, for instance, has come on strong. In the last five games, the walk-on from Houston Second Baptist High School has averaged 9.4 points per game and has hit nearly 50 percent (14 of 30) from three-point distance. In addition, junior Erik Czumbel has averaged 11.2 points in his last six games.

In UTSA’s 82-71 victory over Rice at home on Saturday, Czumbel led four Roadrunners in double figures with a career-high 22 points.

“He’s been awfully good,” Henson said of Czumbel, from Verona, Italy, after the Rice game. “I thought he was terrific tonight. The ball was in his hands a lot. He got downhill. He got in the paint. Every time he shot it, it looked like it was going in.”

Playing limited minutes behind Darius McNeill, Jordan Ivy-Curry and Dhieu Deing in November and December, Czumbel couldn’t get anything going offensively. In his first 11 games, he took only 24 shots and hit six of them. He was 0 for 10 on 3-point shots until making his first trey on Jan. 3.

When Ivy-Curry left the team to enter the transfer portal a few weeks ago, Czumbel stepped up and started to make some things happen.

“It’s kind of been building,” Henson said. “His minutes have gone up … Erik’s going to gauge the situation, see how we’re flowing offensively. He’s not a guy who’s going to decide, ‘Hey, I’m going to go get 20 right now.’ But he understands some plays need to be made.”

While Czumbel has been a pleasant surprise as of late, Addo-Ankrah might have been the surprise of the year for the Roadrunners. He barely played for the first few months. He didn’t play at all in 10 of UTSA’s first 16 games.

But down the stretch, in the absence of Aleu Aleu, who is out for the year with a knee injury, Addo-Ankrah has scored in double figures three times. He torched Southern Miss for 21 points in Hattiesburg on Feb. 17.

“I’m not surprised,” Germany said. “He’s in the gym every night. He puts in the time, the hours. He’s taken advantage of this opportunity he’s gotten and everyone is just super proud of him. He deserves every bit of it. He’s a big key for us.”

Deing could be a wild card for UTSA in the tournament. At times this season, the junior transfer from Dodge City Community College in Kansas has played extremely well.

At other times, he has slumped badly. Once, in the first few days of January, he got so upset after a poor performance in Alabama against UAB that he left the team. Now he is back and is playing well.

Deing, who played for South Sudan’s national team last summer, is averaging 16.4 points while hitting 40.9 percent from three in his last five games.

For most of the season, Germany has been the rock. The 6-foot-11 junior from Oklahoma has averaged career highs of 14.7 points and 7.2 rebounds. Facing pressure in a lot of games from double teams, he has shot 48.2 percent from the field.

On Monday, Germany was named to the C-USA’s honorable mention team.

“There’s a bunch of good guys in our league, so I’m not surprised,” Germany said. “In my mind, I’m up there with anybody in the league. But the guys up there (on the first and second teams), they deserve it. I’ll be there next year.”

First-team honors went to Louisiana Tech center/power forward Kenneth Lofton, Jr. The big men honored on the second team were Thomas Bell of North Texas and Austin Trice of Old Dominion. On the third team, there were no big men listed, only five guards.