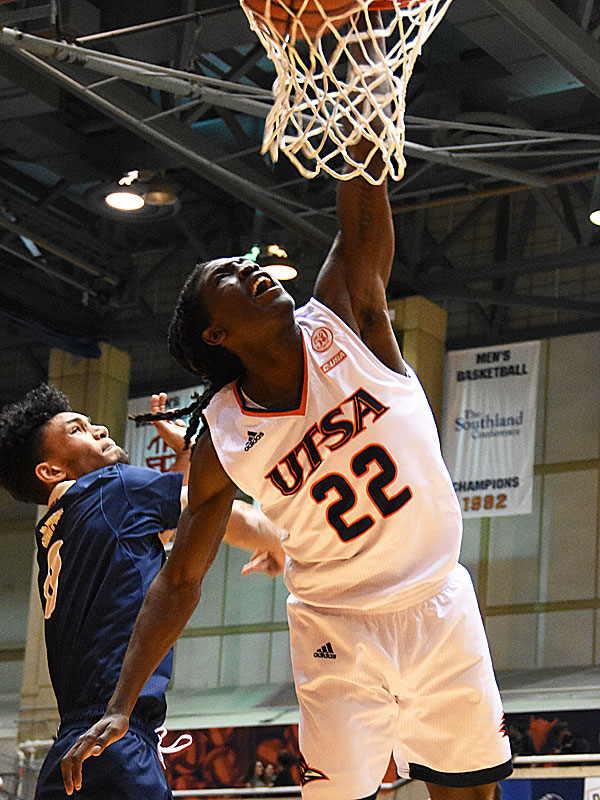 UTSA guard Keaton Wallace throws down a dunk in the second half of the Roadrunners’ 100-67 victory over Florida International on Thursday at the Convocation Center. – Photo by Joe Alexander

An announced crowd of 1,493 at the UTSA Convocation Center watched as UTSA stormed to a 17-2 lead in the first six minutes.

Bidding for their first Conference USA title, the Roadrunners never trailed in the game and pumped the lead to 20 at halftime and to 30 with 11:43 remaining.

With the performance, UTSA extended its home winning streak to nine in a row, the longest for the Roadrunners in 27 years.

Old Dominion leads the C-USA race with a 9-3 record, followed by UTSA and North Texas at 8-3.

Wallace, a 6-3 sophomore from Dallas, has averaged 32.5 points per game in his last four. Most of his damage is done outside the three-point arc, as he has hit 25 from distance in that stretch, but his second-half dunk created a stir.

“I tried to stay calm, but I kind of wanted to jump and down like everyone else. That was pretty impressive. Keaton didn’t always show that type of athleticism a year ago. He really didn’t show it that much in the offseason. It’s just kind of happened as the season’s gone along.” — UTSA coach Steve Henson.

Despite a quiet first half from leading scorer Jhivvan Jackson, the UTSA Roadrunners powered to a 20-point lead on the FIU Panthers.

Jackson, who scored 76 points in two road games last week, hit only one basket — a three-pointer — in six attempts from the field.

But Jackson’s friends more than made up for it.

Shooting 61.8 percent in the first half, the Roadrunners employed the offensive skills of several players to run away from the Panthers.