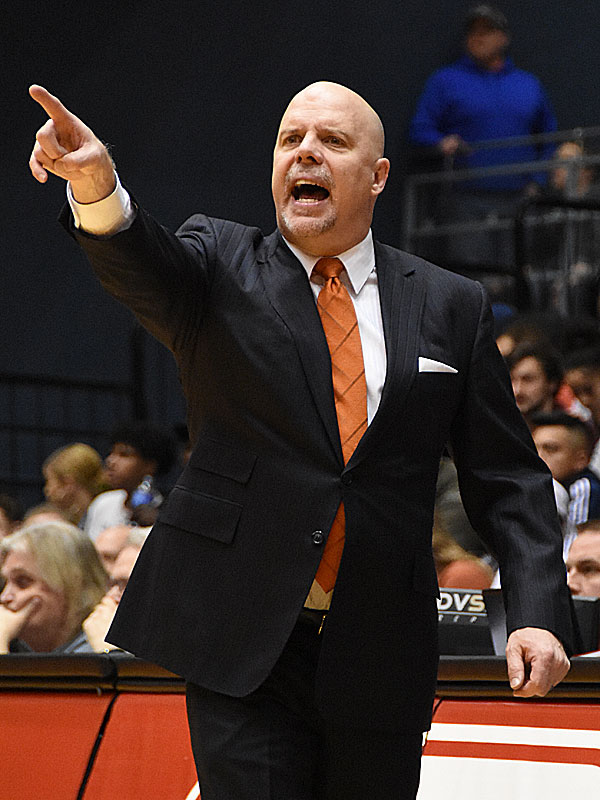 UTSA coach Steve Henson leads his team into a 3 p.m. home game today against the FAU Owls. His Roadrunners need a victory to boost their conference title hopes. – Photo by Joe Alexander

For the UTSA Roadrunners, the mental approach has become almost as important as the physical challenge leading into the stretch run of a race for the Conference USA championship.

For instance, the Roadrunners scorched the FIU Panthers 100-67 on Thursday night, scoring 50 points in each half and running away with one of their best performances of the season. 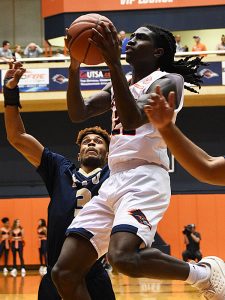 Keaton Wallace led the Roadrunners with 27 points against FIU. -Photo by Joe Alexander.

On the other hand, the effort wasn’t good enough for them to make up any ground on their competitors at the top of the standings.

Both Old Dominion and North Texas also won, leaving the three teams in a virtual tie for first place with seven games left in the regular season.

UTSA once again will try to take the lead in the C-USA race when it hosts the Florida Atlantic Owls today at 3 p.m.

The Roadrunners worked on some FAU-related issues Friday afternoon, but the intensity wasn’t at an extremely high level, as coaches tried to make sure the players are ready for the Owls with fresh legs.

Mentally, players have been told that even though they have won eight out of 11 C-USA games, they can’t afford “slippage.”

In other words, a nine-game home winning streak is nice, the longest at UTSA in 27 years.

But they don’t want to wake up on Sunday having lost to an FAU team jockeying for position in the middle of the 14-team standings.

“We try to be real honest with them,” UTSA coach Steve Henson said.

“We try not to over-sell anything to em. On one hand, we’re in great shape. On the other hand, the standings are still pretty bunched up. We just can’t afford any slippage at this point in the season.” 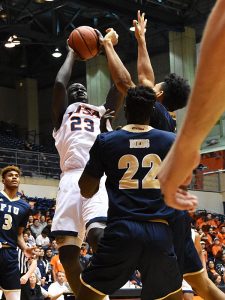 Junior forward Atem Bior has scored 12 points off the bench in each of UTSA’s last two games. – Photo by Joe Alexander

Old Dominion leads at 9-3, with UTSA and North Texas at 8-3. Western Kentucky looms in fourth place at 7-4. Three other teams are tied for fifth at 6-5.

“There could be a lot of movement with three games left in this round, and you’ve got four more games left in bonus play, on top of that,” Henson said. “There’s a lot of basketball to be played. You want to keep doing what we’re doing. Preparing the same way.”

A loss to FAU could be extremely costly, as UTSA faces next week an always-difficult road trip to Southern Miss and Louisiana Tech.

Likely, UTSA needs to win two of the three games to be assured of making it to bonus play in the top tier.

In bonus play, teams will be grouped together, with five in the top tier, five in a middle tier and four in a lower tier. Each group will play four games in a round-robin format.

It’s critical for UTSA to be in the top-five tier, because teams in sixth place or below after next Saturday are effectively shut out of the chance for a top-four position going into the C-USA tournament.

Only the top five can secure a top-four seed, which guarantees a bye through the first round of the tournament.

In other words, if the Roadrunners slipped and lose two of their next three games, they could be faced with having to win four games in four days at Frisco for the automatic bid to the NCAA Tournament. 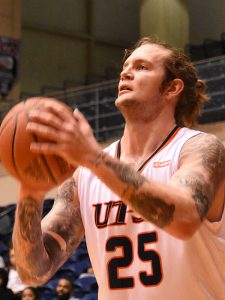 Nick Allen had 11 points and 10 rebounds against FIU. – Photo by Joe Alexander

Considering that UTSA has played all year with a seven-man rotation, that would be a difficult task.

So, even though the Roadrunners feel good about their standing at the moment, their sense of urgency against FAU needs to remain high to avoid what could lead to an extremely uncomfortable feeling leading into next week.

“Again that’s where our maturity comes out,” Henson said. “Guys understand it’s nice to be where we’re at, but if you slip up, any day, then we’re losing ground. We won a game on Thursday, but the teams we’re competing against won, as well.

“So, we didn’t gain any ground except on the peoeple behind us. A lot of work to do.”