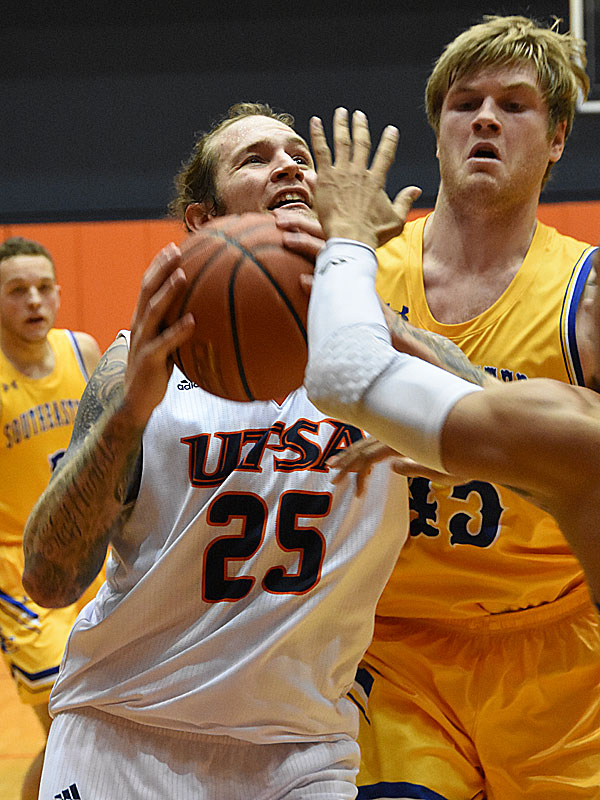 Winners of five games in a row, the UTSA Roadrunners continue to tweak their offensive execution in hopes of getting more players involved, and senior forward Nick Allen has stepped up to answer the call.

Allen has averaged 11.2 points on 55 percent shooting during the streak, leading into tonight’s Conference USA home test against the Rice Owls.

But Allen, a senior from Arizona, has emerged as a third-option threat by knocking down 23 shots in 42 attempts combined against Bethany, Kansas; Texas A&M-Corpus Christi, Southeastern Oklahoma State and UTEP (twice).

It’s been a major change in the offense from earlier in the season when, at times, the Roadrunners seemed to rely too much on their two standouts.

“That goes back to our attention to detail, executing on the offensive side,” Allen said. “It’s not just, ‘Hey, this is what we’re looking for.’ You know, it’s like, ‘You got to run the plays correctly.’ And if you run them correctly, there’s a lot of options to score.”

Coming off two victories over the Miners to open conference play, UTSA continued work earlier this week on the offensive nitty gritty to prepare for home games tonight against Rice and Saturday against the North Texas Mean Green.

“We keep talking about getting sharper and getting better shots and limiting turnovers,” UTSA coach Steve Henson said. “Coming off two games in conference where we had 10 one night and 12 the next, it’s closer. Single digits would be fantastic.

“We got to all be on the same page what a good possession looks like.

“With scorers like Jhivvan and Keaton, there (are) going to be a lot of quick shots. But we also need good possessions where we get the ball side to side, get paint touches. We needed to spend a lot of time on that (this week).”

In other words, the Roadrunners are trying to expand their repertoire of threats.

For UTSA to win consistently, the team surely will need more offense from Allen, Byron Frohnen, Giovanni De Nicolao — who all start — and also from bench players like Adokiye Iyaye and Atem Bior.

In Allen’s opinion, the Roadrunners at times this season have seemed “funneled in on one” option at times. Now, he said, it seems as if the offensive sets are producing much more variety.

“We kind of let the offense breathe a little bit,” Allen said. “It’s opening up a lot of stuff for a lot of people. It’s good. I think that’s where it’s coming from.”

Allen’s increased production on offense may be related to simple physics. The 6-8 forward said he has trimmed down to 227 pounds — about eight pounds under his opening-day weight.

“I started off the season right around 235 and shaved a couple of pounds off,” Allen said. “I feel a little bit better. It’s weird, you know, I didn’t think I would notice it as much.