The Rice Owls might be the surprise team of Conference USA through the first week of league play.

Coming off a 7-24 season a year ago, the Owls have posted a 7-9 record with a 2-1 mark in C-USA leading into Thursday night’s road test at UTSA.

“Those are good wins for them,” UTSA coach Steve Henson said. “And they played very well in the (conference opener) against North Texas, who is playing as well as anybody in our league, so I think they’re feeling great about what they’re doing.” 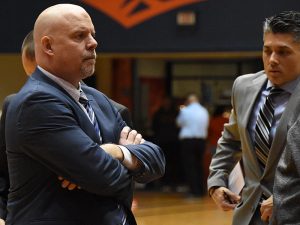 UTSA beat Rice twice in 2017-18, but Henson said he sees more talent on the Owls this year.

“They’ve got a bunch of new guys and a few returners,” Henson said, “and the returners are playing much better. So they’re mixing it nice. They’ve got enough pieces. They’ve got good shooters, enough size and enough quickness to be a good team every night.

“Certainly (they) probably surprised some people, but when you look at them on film, they’re pretty legit.”

Rice closed out the game against Louisiana Tech on Saturday in Houston with a 17-4 run in the final 4:26, securing a 78-66 victory.

Louisiana Tech came into the game at 11-4.

“One of the things that was a defining thing in this game was consistency, especially defensively,” Pera said after the game. “I’m just really proud of our kids how they dug in, again, in the second half.”

The Roadrunners are on a five-game winning streak, their longest since 2011-12. A victory against Rice would equal the 2010-11 team’s six straight victories. UTSA is looking for its first 3-0 start in conference since 1990-91. UTSA beat UTEP twice last week, including 75-60 in San Antonio and 67-63 in El Paso.