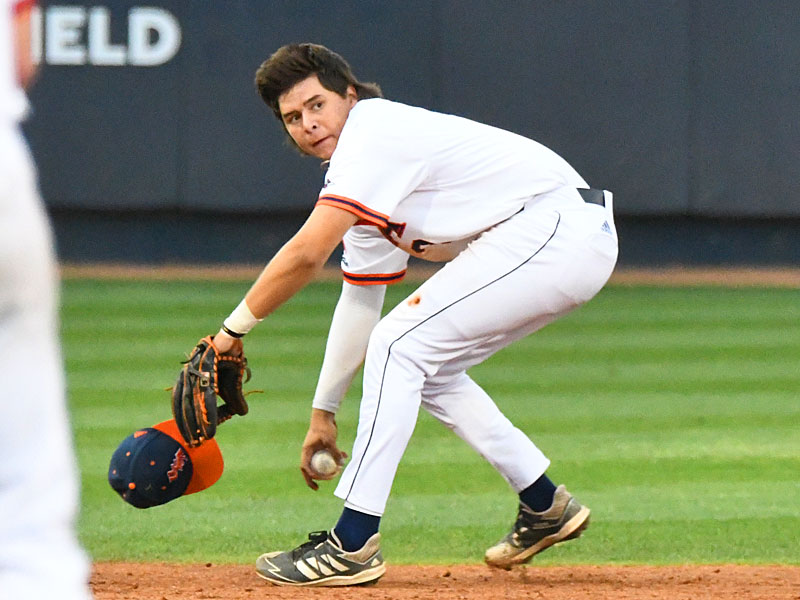 Freshman Matt King had two hits, drove in three runs and made some strong defensive plays at shortstop in UTSA’s 14-8 victory over Texas State. – Photo by Joe Alexander

After five innings in Tuesday night’s Interstate 35 rivalry game at Roadrunner Field, the feeling in the grandstands for fans of the visiting Texas State Bobcats was one of confidence.

The Texas State bullpen was toying with UTSA, stringing together four straight scoreless innings, all while using pinpoint control to keep the home-team’s hitters hopelessly off balance. A three-run lead for the seventh-ranked team in the nation? Well, it seemed pretty safe. 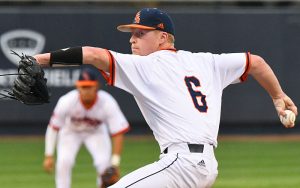 Ryan Beaird, a freshman from Reagan High School, pitched scoreless fifth and sixth innings to get the win. – Photo by Joe Alexander

Until the bottom of the sixth, that is. At that juncture, the Roadrunners took what may be remembered as an important step in their season — maybe the most important to date — by exploding for eight runs on the way to a decisive 14-8 victory.

Not only did the Roadrunners end the rival Bobcats’ nine-game winning streak, they also likely gained some national recognition, which could come in handy when bids are handed out for the NCAA postseason tournament.

“I think the most impressive thing (to) me about tonight was just seeing our team not give up, (seeing it) persist,” UTSA freshman Matt King said. “Coach (Pat) Hallmark is always talking about it. Persist. If we get down, we’re always in the game. It don’t matter how many outs are left. We’re always in the game.”

For the Bobcats, the bottom of the sixth was an inning filled with blown opportunities. If their pitchers had thrown only a few more strikes, they might have survived it. If their defense hadn’t made two errors, then UTSA’s four hits wouldn’t have caused nearly as much damage. 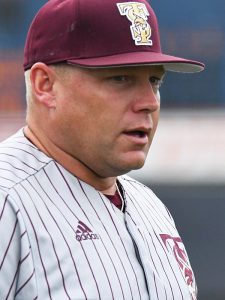 The Texas State Bobcats, under third-year coach Steve Trout, moved up to seventh in one national poll earlier this week. – Photo by Joe Alexander

But, with two walks, a hit batsman, a botched double-play attempt and a fumbled bunt out in front of the pitcher’s mound, the Roadrunners took full advantage of the situation.

First, they seized the lead and then, ultimately, they blew the game open with a three-run double by King, an 18-year-old freshman from Kingwood Pak High School in the Houston area.

By the time King’s two-out, line drive into center field was chased down and relayed back to the infield, Sammy Diaz and Chase Keng had already scored. Isaiah Walker, who started out on first base, wheeled all the way around and slid in head first at home just ahead of a relay throw for a 13-8 UTSA lead.

“Right off the bat, I knew I squared it up,” King said. “I just put my head down and started running. I was just trying to get a pitch I could handle and help my team.”

UTSA fans, including some who live to celebrate success against Texas State in any sport, roared their approval and chanted the school’s four-letter name. ‘UT-SA!’ King just stood on second base, taking it all in.

“It’s always good to get a win,” King said. “But this one meant more. I mean, everyone came out to support. It was great. We had great energy at the Bird Bath tonight. It was awesome.”

For UTSA’s baseball players, the energy seems to be building by the day. They have won four in a row heading into a Conference USA weekend series at Middle Tennessee, and in their last 18 games, the Roadrunners have posted a 15-3 record. 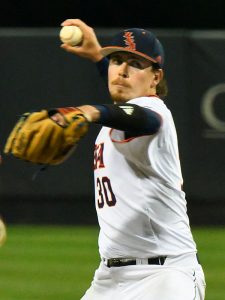 John Chomko struck out three in two scoreless innings for the Roadrunners. — Photo by Joe Alexander

Winning consistently in mid-week situations, they have registered victories this season against second-ranked Stanford, 11th-ranked TCU and now No. 7 Texas State, a Sun Belt Conference team with 32 victories.

Last week in San Marcos, Texas State held off UTSA, 14-12, claiming the win after the Roadrunners had scored seven runs in the top of the ninth. This week, the Roadrunners turned the tables, emerging victorious against the Bobcats for the first time since 2019.

“Yeah, it’s a little rivalry game,” Hallmark said. “(Texas State) coach (Steve) Trout, he does such a good job with them. We kind of started together (both hired, for the 2020 season), and we’re so close (in proximity), we pay a lot of attention to each other.

“I’ve got a great deal of respect for him. He’s got a great club. It’s a little bit like ours, (with) some older hitters. Hitters that are just very, very disciplined. They’re hard to strike out. They don’t let things bother them.

“It’s a great win, because they’re so good.”

The Roadrunners fell behind early, 2-0, in the top of the first. Then they exploded for five in the bottom half for a three-run lead. Undeterred, the Bobcats answered with four runs in the second inning. Ben McClain hit a three-run homer and Dalton Shuffield a solo shot. In the third, the Bobcats added two more runs for an 8-5 lead.

On many nights previous to this one, the Bobcats might have rolled to a double-figure scoring total and a lopsided win. Not this time. UTSA relievers, including Simon Miller, Reece Easterling, Ryan Beaird (2-1), John Chomko and Luke Malone answered the call.

Trying to put out the fire in the third, Miller gave up an unearned run. But that was it. The Bobcats would not score again. Easterling pitched one inning, Beaird and Chomko worked two apiece, and then Malone — UTSA’s ace — finished with the last three outs.

King had a memorable sixth inning with two hits in two at bats. First, he singled and later scored. On his next time up, he lashed the 3-RBI double.

Keng is UTSA’s hottest hitter over UTSA’s 15-3 surge with 26 hits (in the 17 games that he has played during that stretch). Barry, meanwhile, is the team’s hottest hitter in the short term. In UTSA’s last five games, he has produced multiple hits in each game, 13 in all.

Hallmark praised King as a “savvy” athlete who has played year round since grade school. He showed off his poise late in the game, helping to turn a double play on one maneuver. On another, he made a difficult catch of a pop fly in foul territory.

With a .274 average at the plate, he is expected to improvce with age, maturity and time in the weight room.

“At that plate, what he needs more than anything, is just strength, which comes with time,” Hallmark said. “His swing is fine. He’s got a good approach. He knows college pitching is tougher, and he’s working on it. He’s going to be a great hitter for us as long as the strength keeps comimg.”

Scenes from the sixth

Chase Keng singles through the middle for an RBI and a 10-8 lead for the Roadrunners in the B6. https://t.co/hyCDEtJ4sq pic.twitter.com/BR3gfVK68y

KING! Matt drills a bases-clearing double into the gap in left-center, making this an eight-run sixth inning to take our lead to 13-8. #BirdsUp 🤙 pic.twitter.com/QKogNzI8lG