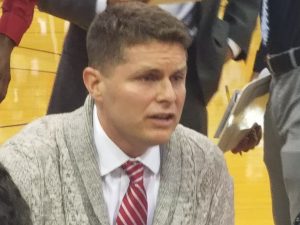 Incarnate Word is off to a 2-1 start under first-year coach Carson Cunningham (at left).

With the victory, UIW improved to 2-1 on the season. UIW will host Texas Lutheran on Monday night to complete a three-game homestand.

UIW is a fledgling NCAA Division I program competing in the Southland Conference.

The Cardinals are playing in their first season under coach Carson Cunningham, a former guard at Purdue.

Cunningham is in his first season as a Division I coach after working the past five seasons at NAIA Carroll College in Montana.

So far, the coach has been playing with a lot of young players.

It hurt him in the opener last week when UIW was pounded 87-37 against Big 12 power Texas Tech.

But the young Cardinals seem to be finding some confidence against teams from the lower levels of college basketball.

Next, a night later, they handled UT-Tyler with ease.

Both nights, Cunningham started four freshmen and a sophomore.

Despite their youth, the Cardinals pulled away from the Patriots mid-way through the first half and led by 22 several times in the second half.

The Patriots are in the first year of a transition from NCAA Division III to Division II.

UIW senior Charles Brown hits a shot in the paint Friday night against St. Francis, Illinois. Freshman point guard Morgan Taylor started the play out front by passing to another freshman, Romello Wilbert, who fed Brown in the post.